Why Does This Print Ad Drive Me Nuts?

Maybe because I'm an English major and I was trained (read: corrupted) to see symbols in almost everything?
Maybe because this guy has the most insufferable smirk on his face?
Maybe because the advertisement is for the damn counter top, for heaven's sake, but you would hardly know it, from all the other innuendo-laden stuff going on... 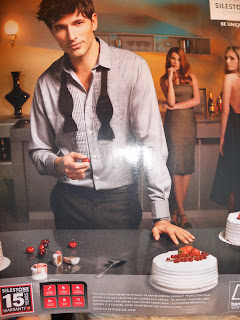 Like the cherry he's holding in his hand.
And the fruit dripping...chocolate.
And the...sweet something that's been opened, er, cut in half.
And the two babes in the background who have no earthly reason to be staring at the man with such naked expressions on their faces if all they cared about was the counter top.
Which they so obviously don't.
And even the black vase in the background, with its ridiculously pregnant lines.
Which are so archly repeated in the lounge lizard's bow tie.
Which is dangling, for Pete's sake.
And the fact that there's plenty of whipped cream in this photo.
And whipped cream and two babes in the background gets a guy to thinking.
If I were in the market for new counter tops, I would run screaming from this ad, it's so sexist and over-the-top and unnecessarily slimy.

Oh, wait: I am in the market for new counter tops. Heh! You guys just lost a potential sale.