From the same part of the world where people live who thought this monstrosity was a good idea, we now have... 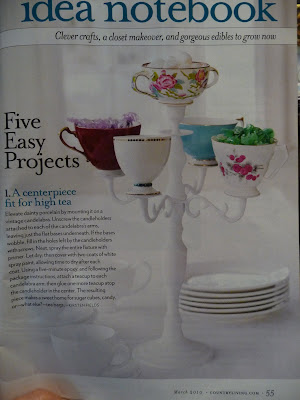 I won't mention the magazine this appeared in, because I generally love their sense of style, but...Seriously, people? Like, where are you going to store that eyesore when you come down from your caffeine-induced, too-many-pots-of-tea high?

And exactly what demographic do you think this is going to appeal to? Post-menopausal ladies with too many cats? Old maids (of both sexes) who gush over All Things Useless? Thirty-something mommy bloggers with waaaaay too many glue guns in their crafts closet?

Not to mention, people, that "High Tea" is NOT, I repeat, NOT the phrase to describe a lovely afternoon meal with dainty things to eat. That is properly called "Afternoon Tea."

"High Tea" is a British working-class, hearty, last meal of the day traditionally eaten by farm and factory workers and other blue-collar laborers after work, about 5 or 6 o'clock. It features hearty, lowbrow fare, including eggs, meat, and cold fish.

"Afternoon Tea" is a midafternoon, light meal, created in the 17th century by the British aristocracy, featuring delicate sandwiches and sweets. It was designed to help hungry, high-class tummies suffer the long wait between luncheon and dinner.

But don't take my word for it. Look it up.

Or, go ahead and take my word for it! I got it from the horse's mouth, so to speak, in 1983, when I took a weekend U.C.L.A. Extension course, "The English Way of Tea." No less an authority than Samuel Twining--as in Twining's of London tea purveyors--served as our guest lecturer and lay this high-vs.-afternoon distinction before us.

Man, that was a tea-soaked, wonderful day! For some reason, I kept the program: 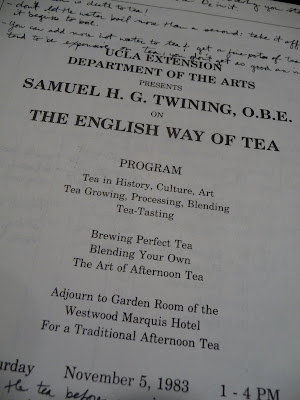 Anyhow, folks, for the sake of humanity, wise up: Don't create ugly crafts from teacups. Drink some Lapsang Souchong from them instead.

And if you add some crustless sandwiches and itty-bitty cookies or scones, don't make the mistake of calling it High Tea.