“I’ve just seen a dog without a collar…very skittish…wouldn’t let me approach.”

The “stray dog alert” popped up on my neighborhood's electronic bulletin board in late August.  The accompanying photo showed a golden-haired, medium-to-large dog looking very scared: tail between his legs, hunched-over spine, and some serious Side Eye going on:

Stray dogs aren’t common in the area; this is a neighborhood with neat, trim houses, families with children, and pet dogs on leashes.

Day after day, reports of the stray came pouring in. Neighbors spied him crossing a busy boulevard during rush-hour traffic, skulking around their yards, running away at the sight of an approaching human. He had a limp and looked way too skinny.

August rolled into September, with its miserable weather, hot and sticky. One morning a surprise thunderstorm clobbered the city, dumping a record-breaking amount of rain. And the homeless dog was out in all of it.
Concerned, my neighbors put out bowls of food and fresh water. One neighbor laid a large dog bed on her porch; she never saw him use it, but in the morning there were fresh, dirty paw prints on it. He lost his limp and gained a little weight, probably because he now had a steady source of food and water. He no longer had to be on the run.

We started calling him “Rex”: 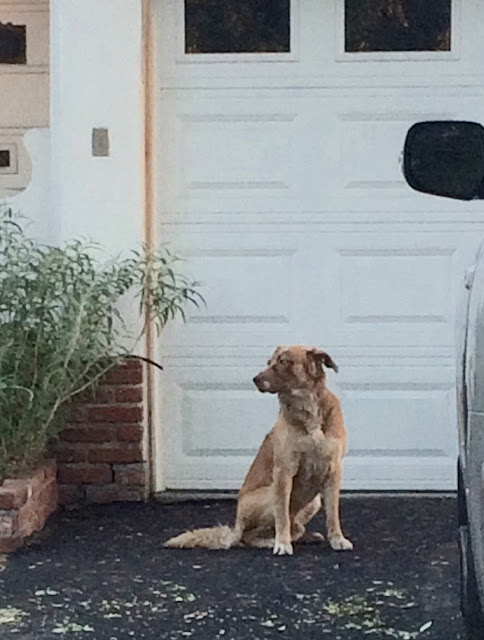 The golden-haired boy with the white blaze on his head settled into a pattern. He roamed the streets under the cover of night and napped during the day in certain gardens, deep in the shade: 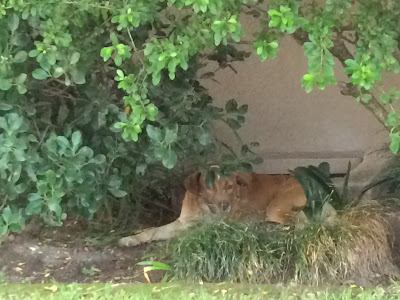 People walking their dogs in the early morning often saw him sleeping in the same few spots. He seemed non-reactive to the neighborhood cats and less afraid of people than before: 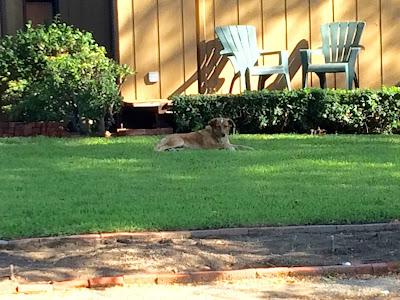 We also noticed that he was bolder around humans if we were walking a dog. Taking advantage of that, I walking my Pugs past Rex's hiding spots whenever I was out for a walk.

A small group of us began laying plans: Find a foster home, a trainer, a vet. We pledged money to his care and rehabilitation. We just needed to catch him. But how?

The first weekend in October, Rex seemed ready to come in from life on the streets. On Friday the 2nd,  he touched noses Won Ton as I was sitting next to him. Exciting! On Saturday the 3rd, professional rescuers from two different nonprofit, no-kill rescue groups almost caught him, using cheeseburgers and flexible netting.

The next morning, I acted on a hunch. I went out very early in the almost-dark with Won Ton and sat quietly near where Rex was sleeping. Within a minute, he came over to us and pushed his big, soft head into my hands. The light was very poor, so this is the best image I can give you. Sorry about that: 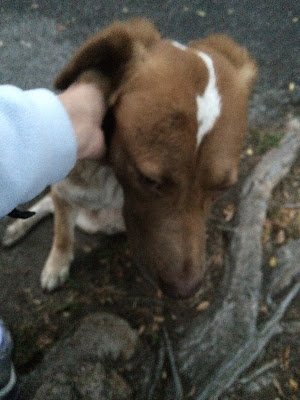 He let me pet him all over. He was filthy, but otherwise he felt pretty good. As the sky slowly lightened over the next half hour, the two dogs and I stayed together, just sharing the quiet. I hope I never forget how thrilling that felt!

Long story short, Rex followed me home. The Hubby opened the garden gate and closed it behind us. We sat together as we waited for transport to the vet. As we waited, I snapped these photos: 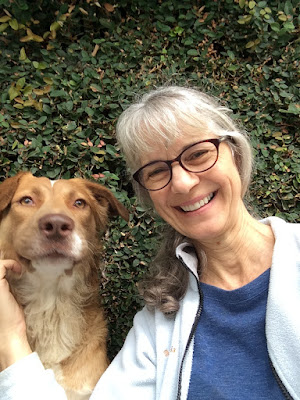 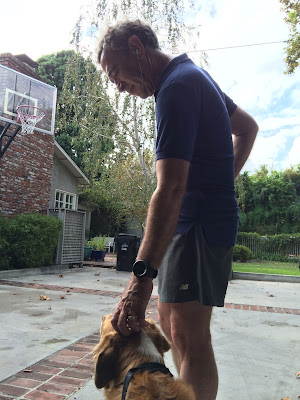 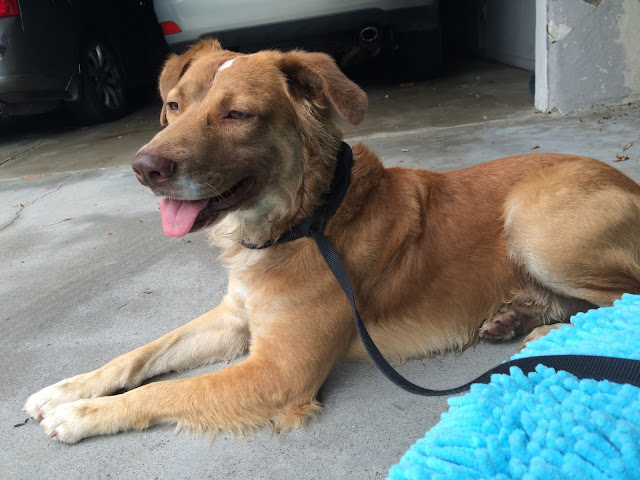 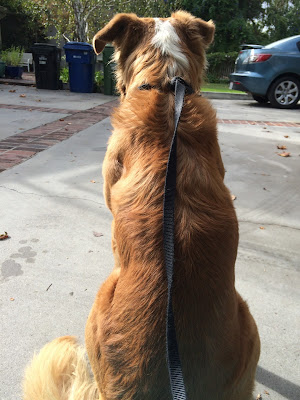 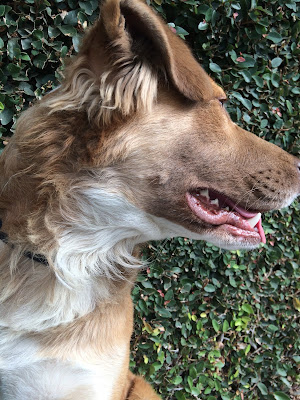 After a trip to the vet for microchipping, shots, and a neuter, Rex went to live with his professional trainer. He’s there now, learning his commands and how to be a fabulous family dog. He's young--maybe a year and a half--so he has years to share with the right family. 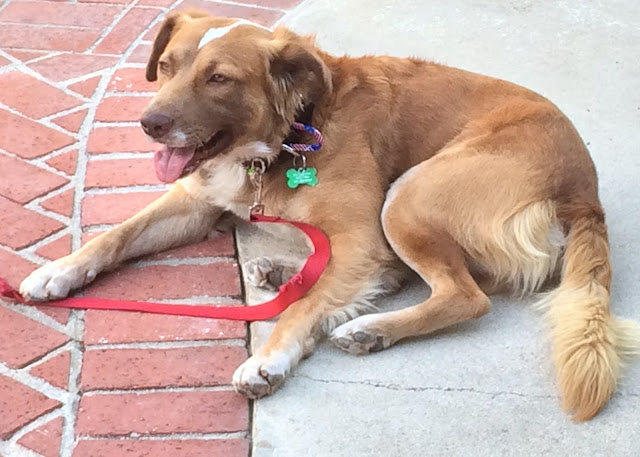 Won Ton and I visited Rex at his trainer's house a few weeks ago. The big boy seemed very happy to see us--and he felt so soft! Amazing what a bath can do for a dog: 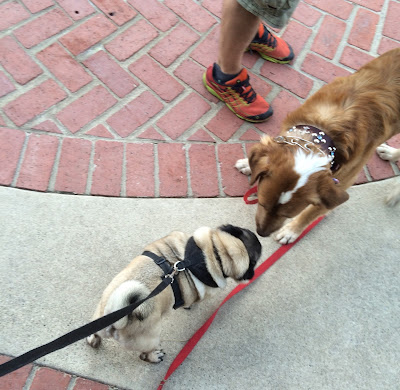 In a few weeks, Rex will be ready for his Forever Home. I hope he finds a home somewhere not too far away so Won Ton and I can go visit occasionally. 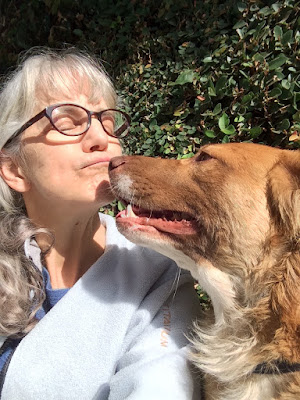 So many people stepped forward to help save Rex. I want to thank Mimi & Dan; Pat & Tom, Orly, Ed, Margaret, Fritz, Robin & Damon and their crew, Melanie & Darlene, and Jeff. It took a village to bring this beautiful boy in from the streets.

I hope I never forget how thrilling it felt to be the one to walk him into his new life.

A New Life for Some Old Clothes

A few days ago while out on a walk, I came across a tumbled-over cardboard box with clothes spilling out of it. Clearly somebody was tossing them out--they were in the dirt, on the street, and smelly.

But I saw they were in good condition and just needed to be cleaned.

I took them all home and ran them through a wash and dry. Here's most of what was tossed out: 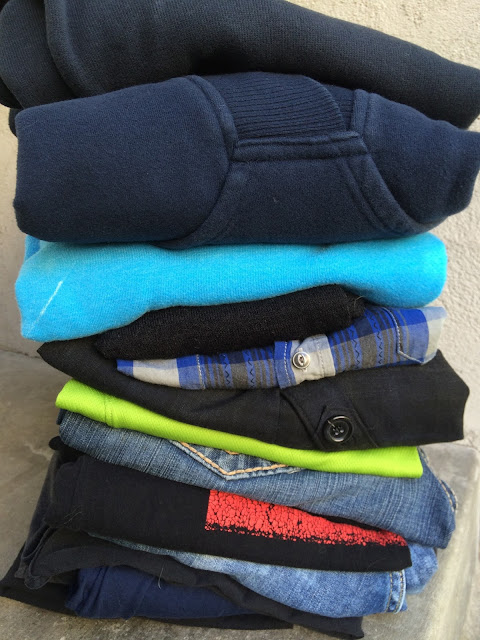 Some blue jeans, some tee shirts, some sweatshirts: 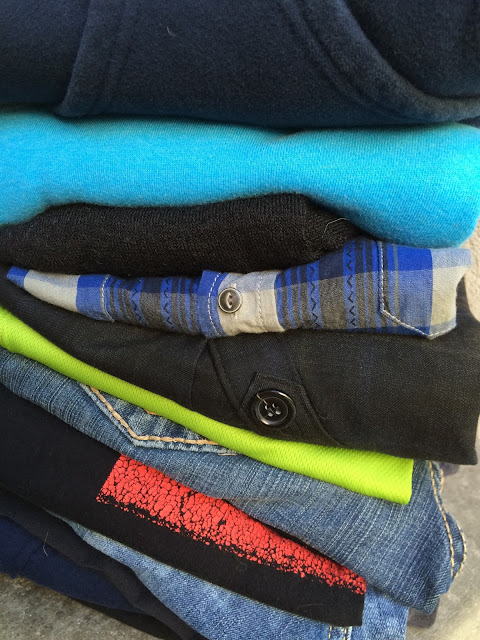 This one in particular looked so cozy. The hood is lined with faux fur: 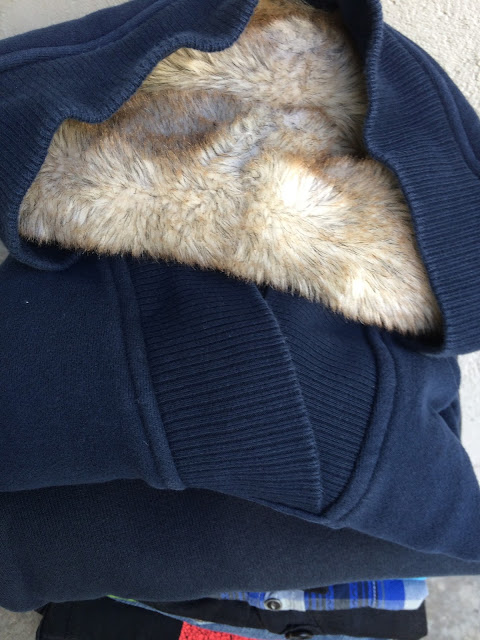 It almost looked like an animal curled up in there and went to sleep: 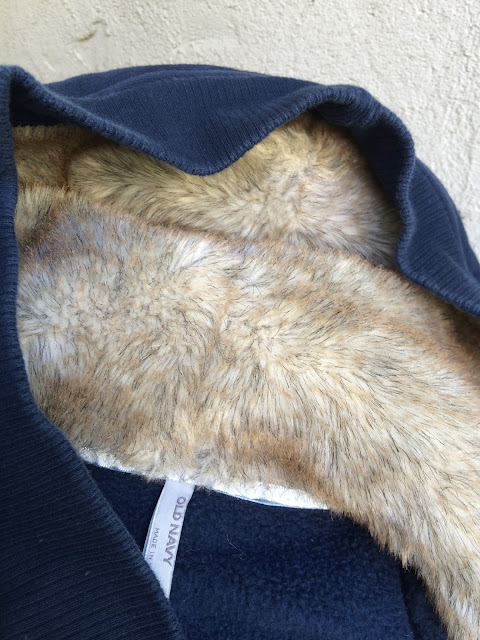 There was also a hand-knit scarf, with this pretty button to fasten it snug around the neck. 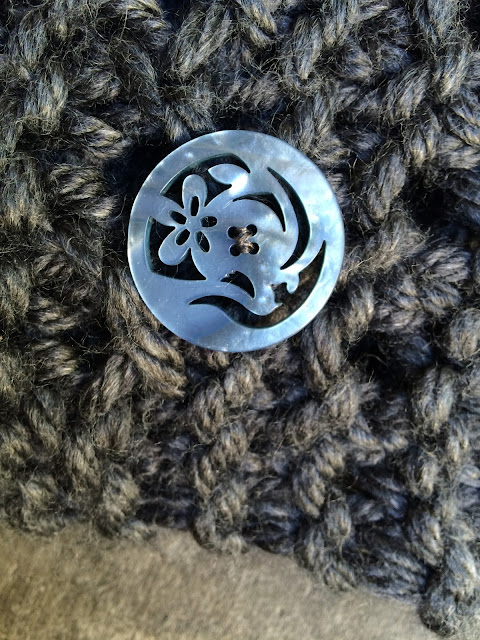 I will never understand why people throw out perfectly good clothes when there are folks in this world who don't have enough warm, clean things to wear.

I am taking the sweatshirts and the knit scarf to Lovely Daughter #2, whose students--and their parents--often don't have enough warm clothes to get through a Boston winter.

The rest of the pile goes off to charity.

Recently I worked a dog-adoption event, and a professional groomer was there to give the shelter dogs a little polish: 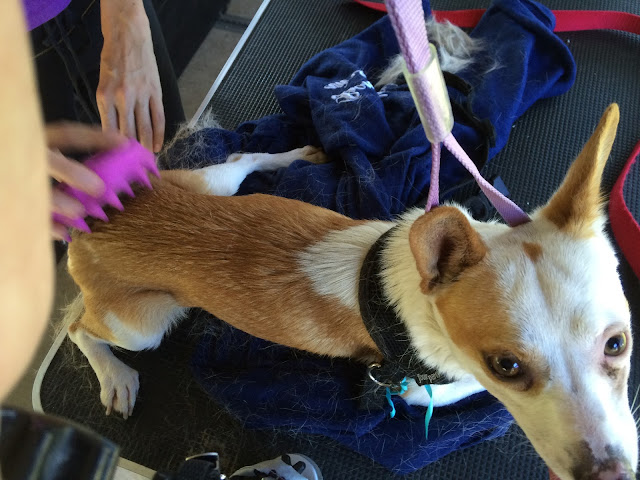 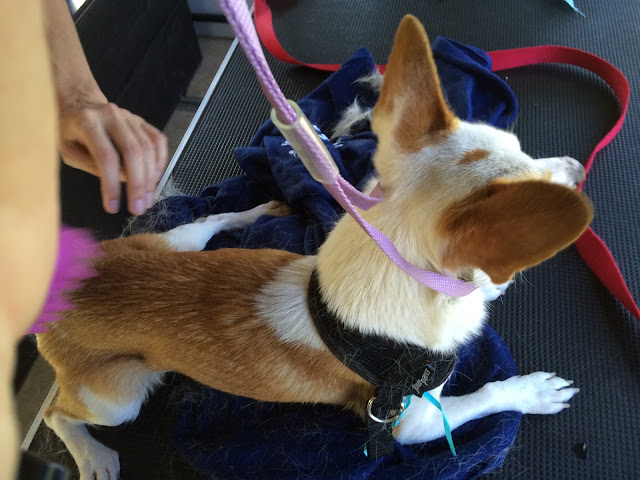 She used a soft rubber brush on the dog I was handling. He loved it; it was called a "Zoom Groom." As soon as I could, I bought one from my local, independent pet store: 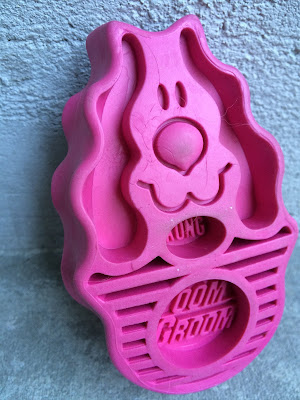 My Pugs shed a lot. Up to now, I brushed them with a "Furminator," which is great, but you have to be careful when using it. The steel teeth can hurt a dog's skin if you push or pull too hard.

The great thing about the Zoom Groom? It's terrific at removing loose hair, but it does it with soft, rubbery "fingers" that practically massage the dog's skin. My Pugs close their eyes and bliss out when I use it on them: 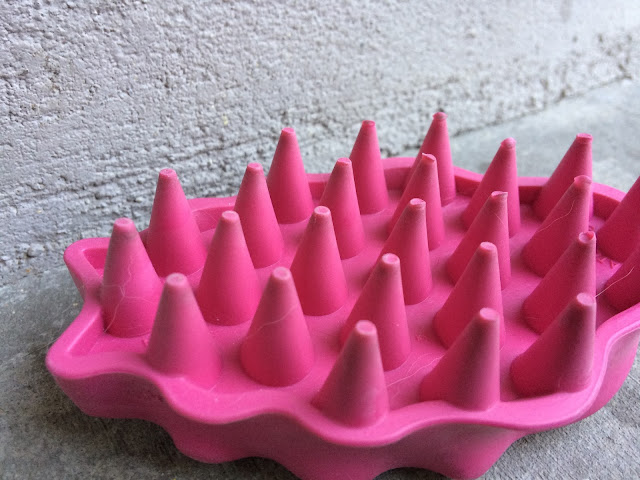 And boy, does it pull out the loose fur!: 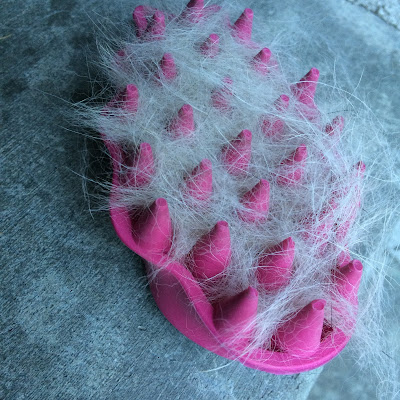 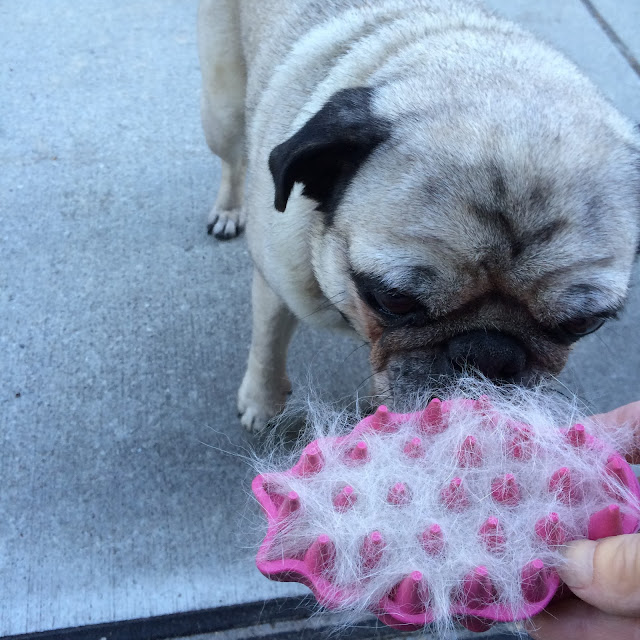 Plus, the Zoom Groom makes these cool little honeycomb mats of Pug fur: 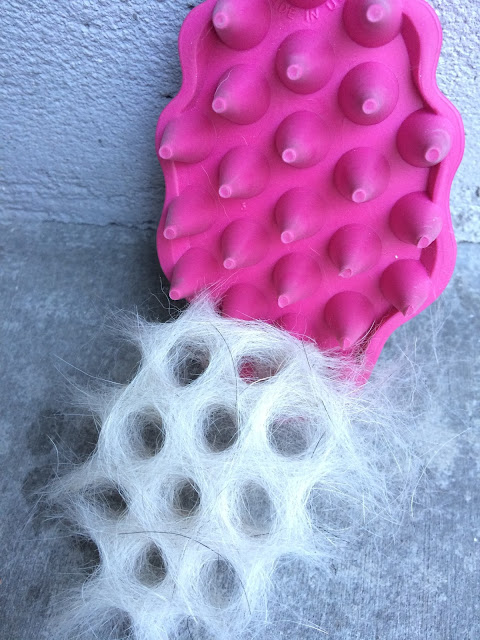 Here's a tip I got from my local wildlife store: Save that soft fur you brush off your pet. In the early spring, put it into a suet basket and hang it from a tree. Birds use the soft fur to line their nests for their babies.

Turning trash into treasure, one Pug at a time.