I'm not a big fan of yard sales. Usually they feature too much trash and not enough treasure. But I was out walking the dogs early this morning and stumbled upon a really good sale. Oodles of stuff, lots of it very nice, and the young man and woman running the operation begged me to come over so they could say "Hi" to the pugs.

How could I say no?

So they held Mu Shu's and Won Ton's leashes, and I made a beeline to the crystal, china, and silver. This is what I found: 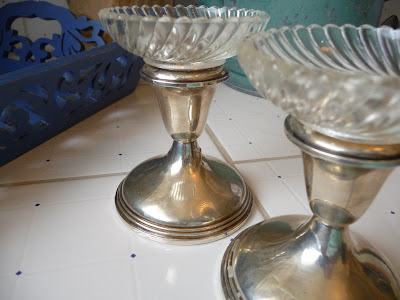 A pair of Reed & Barton silverplated candlesticks with glass bobeches plopped on top of them. The wax-catchers clearly weren't manufactured to go with these candlesticks, but I liked the swirly pattern of the glass: 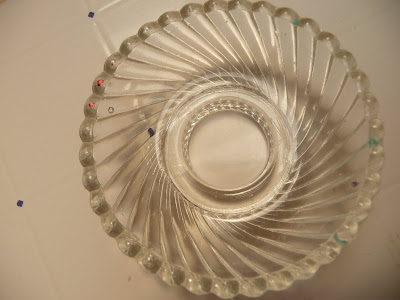 This one has the tiniest flecks of red glitter (about the 9:30 position) and bits of green wax at 1, 3, and 5 o'clock. Makes me wonder; were they last used at Christmas? I hope it was a happy one. The base of one of the candle holders has been oddly broken: 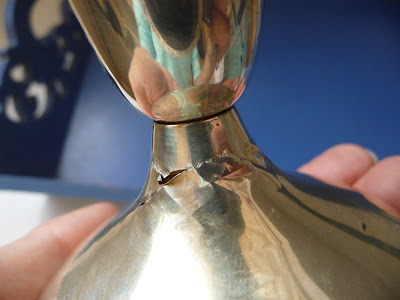 I learned later from my wonderfully knowledgeable silversmith that the damage was probably caused by somebody polishing the candlestick. It's a common mistake, she explained, for people to polish silver or dry a crystal glass by wrapping a cloth around it, then twisting the base in one direction and the top the opposite way. The torquing is more than some slender objects can bear. So word of warning: Don't "wring its neck" if you are cleaning or drying something with a slender part! 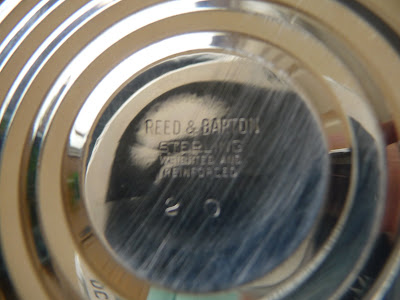 This is the bottom of the candlesticks. My wise and auspicious silversmith says don't be fooled by the word "Sterling" there. Yes, it is sterling. But it's a paper-thin layer of sterling applied over a base that is made of a sort of clay/wax composite. The composite dries out and shrinks over time, leaving the thin layer of sterling susceptible to dings and tears of this sort.

Bottom line: pretty, but not worth fixing up. (I'd guessed as much, but I love getting her input because I always learn something). These will make a nice addition to my slightly funky collection of silver candlesticks. And someday I'll happily fork them over one of my children upon setting up his/her first apartment.

The next item I found at the yard sale didn't start out so hot. It has a chipped lip: 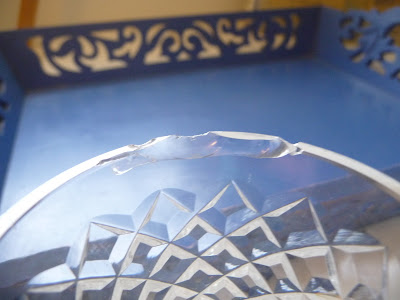 But it's a very sweet little bud vase, a little over four inches tall, heavy and well weighted for its size. And I love the cuts, with the diamond pattern on top and the parallel horizontal cuts climbing the sides. It reminds me of a Waterford crystal pattern (although it is not). Filled with water and flowers, the vase won't even look like it has a chip, I bet: 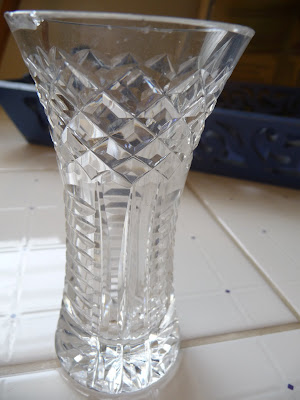 Lastly, I pounced on this beauty. It's another bud vase, this one about seven inches tall. The cuts on it are very understated, very restrained, almost tailored in appearance: 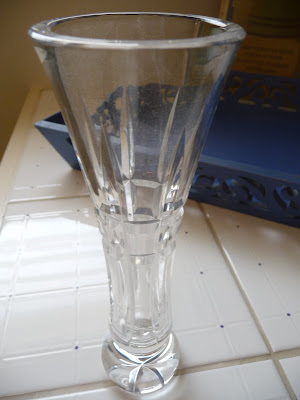 And--ta-daaaa!--it's genuine Waterford! Here's the ghostly-looking, etched name, which usually appears on the foot of any hollow-ware Waterford article, be it goblet, vase, bowl, or tumbler: 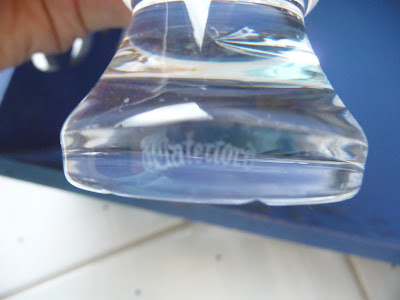 Plus, this taller vase doesn't have a nick or a flea bite on it! (A "flea bite" is a tiny, often unseen nick in the edge of crystal or china that can't be readily seen but is felt when you run a finger over it.) I love the way the two vases look together, like Mutt and Jeff, George and Gracie. One short and fancy, one tall and plain: 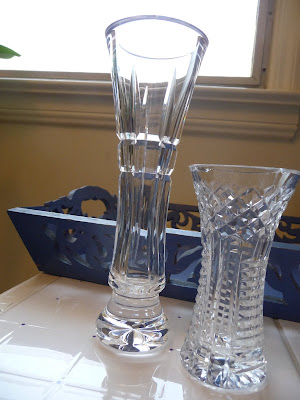 Anybody care to guess how much the pug-loving young folks charged me for this haul? To review, it was 1)a pair of Reed & Barton sterling candlesticks, 2)two swirly-glass bobeches, and 3)two vases, one of which is Waterford crystal, in mint condition. Guesses, anybody?


How much do you think?


Nope, less than that. A lot less.

Yup; that's it. Three measly bucks! I almost felt like I was robbing them, but when I asked, "How much?," that's what they said. I didn't even bargain with them to get to that number!