This is my baby, all six feet, one-half inch of him. He's a lovely person, smart and funny and handsome and athletically gifted and a good student. He reads what he has to for school, but (unlike the rest of the family), he doesn't read for pleasure much. This sorta/kinda/totally breaks my heart.

And then every once in a while, he gets into a book the way submarines get into the ocean. The way chocolate gets into cake. The way...well, you get the idea. A bomb could go off overhead, and he wouldn't know. Because he's reading J.K. Rowling.

And I sing hosannas in the next room. 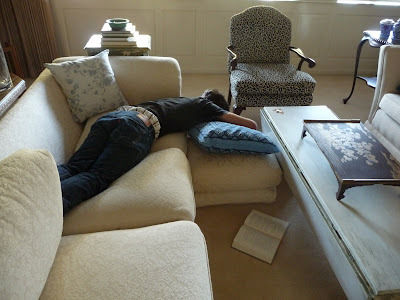 For some reason, the "Harry Potter" series grabs him like nothing ever has. When he was little, I read the books aloud to him. Then he got big and read every one of them himself. Then every time one of the movies came out, he re-read the corresponding book. So after seeing "Harry Potter and the Half-Blood Prince" twice last weekend, he re-read the sixth and seventh books in an upside-down, flop-all-over-the-couch literary marathon. 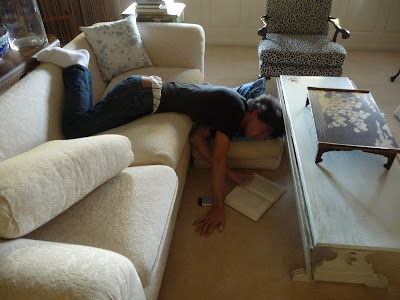