My first cooking foray in the camp dining hall

I'm spending the summer at Camp JCA Shalom in Malibu, my home away from home since I was eight years old. This summer I'm working as the camp kitchen manager. I supervise meals, fill food requests, serve as a liaison between the staff and the Mexican guys who work in the kitchen (thank you, Sra. Loles for making sure I learned Spanish in high school), and generally make sure everything food-related goes smoothly.

One such food request came last Friday, when my friend Daniel asked me if he could make French fries for the staff for a Canada Day celebration. (Poutine is a supposedly traditional Canadian dish of French fries, gravy, and cheese. I think it sounds gross, but then again I've only ever had the camp version.) Turns out we didn't have enough oil to use the deep fryer, so I helped Daniel make baked french fries instead. Amazing how easy they are when you start with pre-cut potatoes: coat with olive oil and seasoned salt and bake at 350 degrees until golden. 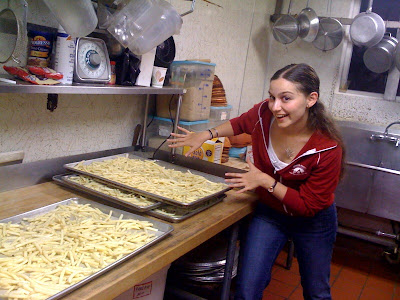 It was around this time that I got bored with making easy things like french fries and gross things like vegetarian gravy from a powdered mix.

And then I got distracted by the awesomeness of an entire trash-can-sized tub of flour. And one of sugar, and one of pancake mix. 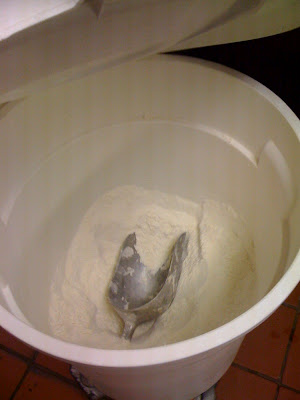 So, clearly, I decided to make cupcakes. Mrs. Abernathy's cupcakes, to be precise. Except I had a lot of trouble finding cocoa powder, so at first I was using crappy hot chocolate mix. 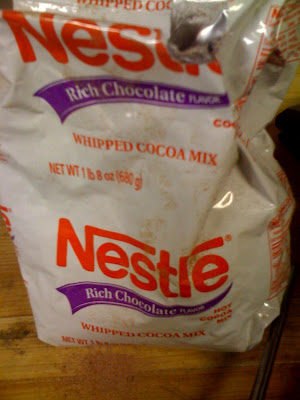 I also used margarine instead of butter, because camp literally doesn't have any. I must have really wanted those cupcakes. Luckily Lauren had just brewed some coffee so we had plenty handy for the cupcakes.

Note that by this point Daniel was pretty much on his own for the Canadian cooking. Whoops. Sorry about that, dude. 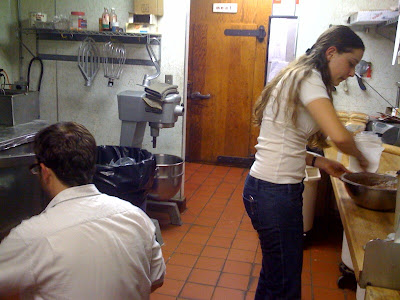 The batter looked about right for Mrs. Abernathy's. Not quite dark enough, but Lauren and I both agreed that it tasted chocolatey enough.

As a side note, I totally want these cupcake pans. You can bake two dozen at a time! I have no idea why camp has them, as I don't think there's ever been a single muffin or cupcake to come out of the kitchen in the last 15 years I've been there. But it all worked out pretty well for me. 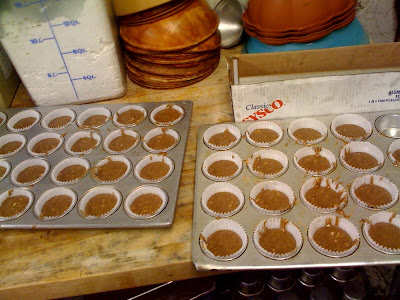 I think the "panderia" is my favorite room in the kitchen. Because yes, the camp kitchen is large enough that it comprises multiple rooms. Heck, we have 8 burners, a huge griddle, two walk-in refrigerators, two room-sized pantries, a walk-in freezer, and three huge flip-open-the-top freezers. But the bakery room is my favorite. I think it's the butcher block counters that push it over the edge. That, and the Hobart mixer that's even bigger than my Synergy one. I can't wait to make a bajillion loaves of bread or something that will need to use that mixer. 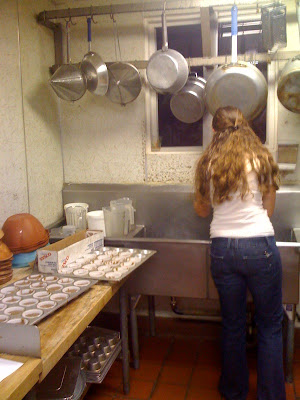 The aftermath, aka, the bowl I had to clean really really well so Jorge our chef wouldn't be mad I was baking late at night... 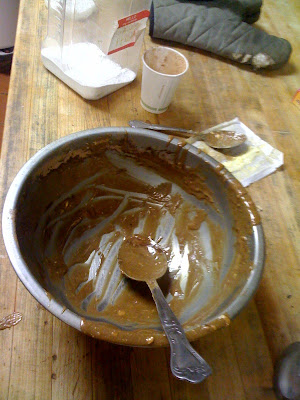 Unfortunately I don't have a picture of the finished cupcakes. But they were actually pretty good. Tasted more like hot chocolate cupcakes than Mrs. Abernathy's, but I guess that was to be expected. And with the cream cheese frosting I whipped up the next morning, they were downright delicious.

My favorite response was from Elevi: "Alana, si sabes cocinar!"
Posted by Alana at 8:51 PM