It's rhubarb season! I wonder why more people don't rejoice in this herald of spring. Even accomplished home bakers seem to shy away from this odd veggie that looks like scarlet celery but cooks up like a delectable fruit. Maybe it's because of the way rhubarb stalks appear: 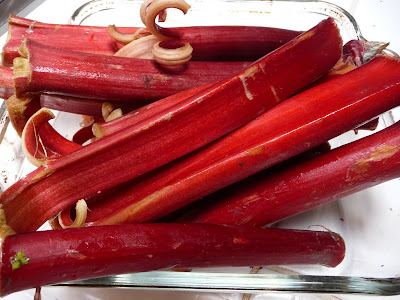 Close up, rhubarb is kinda...scary looking. Primeval. Vaguely obscene, even! 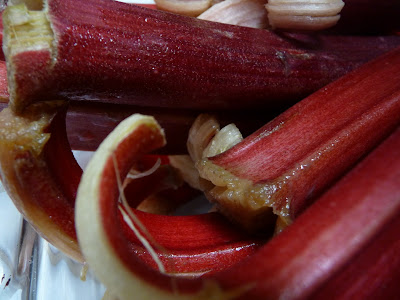 But never fear! Wash those puppies in some cold water and toss them in a colander. Show them who's boss. 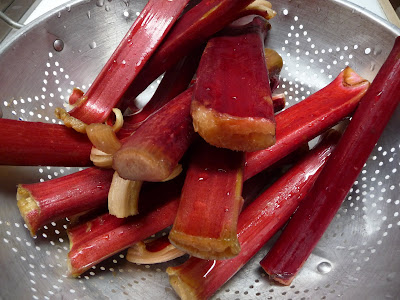 Chopping them down into one-inch pieces, as I did for this recipe (below) seems to tame them and cuts down on the "ick" factor: 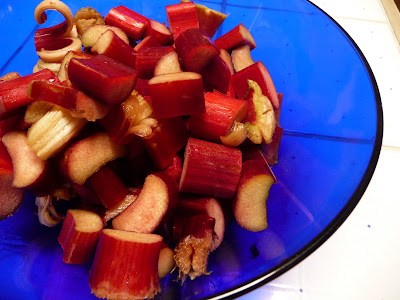 The sound of chopping in my kitchen brings my pugs running. Perhaps there'll be a scrap! Not this time, Won Ton. All parts of the rhubarb plant are inedible when raw. It takes tons of sugar and time in an oven or over a flame to make Rhubarb Magic. Unconvinced, he hopes for a morsel: 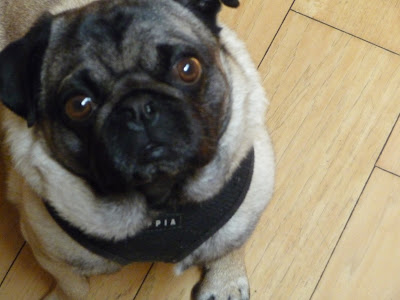 Into the bowl of chopped rhubarb, dump sugar, flour, and vanilla extract: 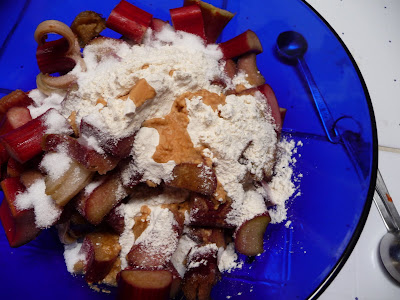 Hint: when the flavors of a dish are very simple and few, as in this recipe, it's extremely important to buy the best-quality ingredients you can buy. This is my favorite vanilla, below. It isn't cheap, but it is head and shoulders above the kind we had back one generation ago. I get it at Williams-Sonoma, but if you live near a high-end grocery store, they may carry it, too: 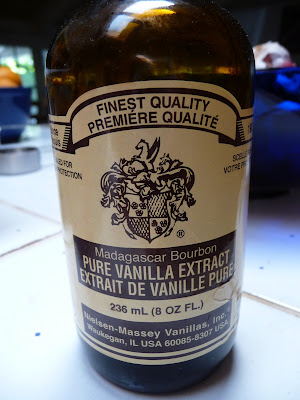 Stir the bowlful of ingredients until the rhubarb pieces appear fairly evenly coated with the sugary coating. (Confession: even though there's a stirring spoon in the photo below, about 10 seconds into the stirring, I dug in with my free hand and stirred, spoon and bare hand working together. Took a lot less time.) Set this mixture aside while you make the topping. 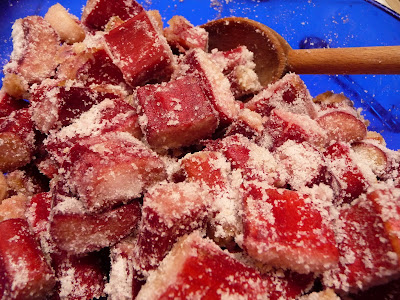 Oops! Run over and turn on the oven, which I'd forgotten to preheat to 375 degrees F: 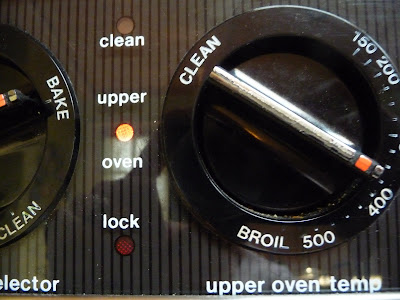 Okay, back to the topping.

Is there anybody out there that doesn't think that brown sugar in a zip-able plastic bag is a major improvement over those cardboard boxes? Invariably sugar packed the old way turns into a solid brick, requiring much massaging and swear words before it can be broken down to be measured. (And yes, I recycle the cleaned-out empty plastic bags.) 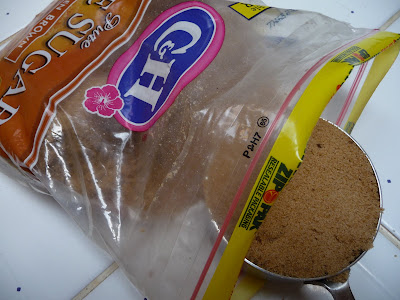 Anyhow, the topping is made from flour, light brown sugar, salt, and butter, cut into little pieces: 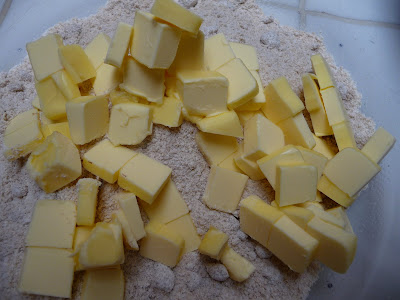 The original recipe calls for rubbing the butter with your fingers into the dry ingredients until the mixture resembles coarse meal. I tried that for a moment, and it was a mess. I say, use a pastry blender, which is much more efficient. Here's the blended topping, below. Don't obsess over obliterating every little blob of butter. The recipe will turn out just fine. 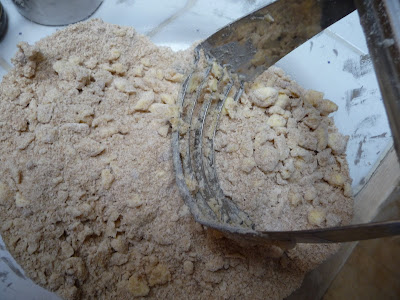 The sound of the pastry blender working against the sides of the bowl brings the pugs trotting back, who'd temporarily given up hope and wandered away. Here's Mu Shu, staring intently at the floor, hoping to be the first to pounce on anything that should hit the floor: 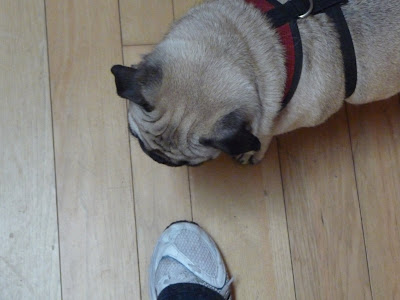 Pour the rhubarb-sugar mixture into a casserole. The recipe calls for a 9"x13" size, but I'm going to freeze half of this dessert for another day, so I did two 8"x8" casserole dishes: 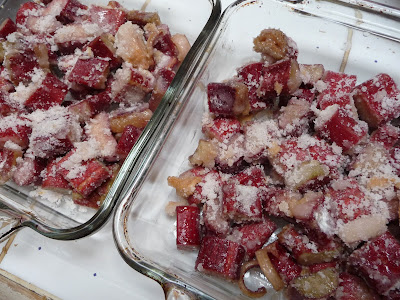 Sprinkle the flour-brown sugar-butter mixture over the top: 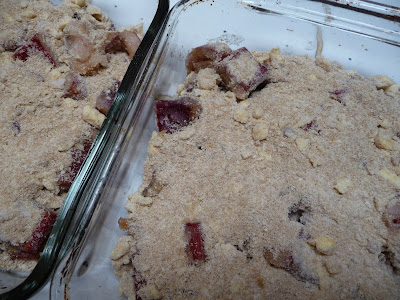 After it's baked, the rhubarb should be tender and the topping golden, maybe with a bit of browning at the edges of the dish: 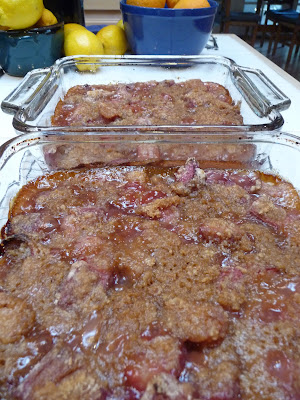 Dishing it up, you realize your concoction looks like...glop. And that's being polite. Don't lose heart now! This is not a pretty dessert, but it's an incredibly yummy one: 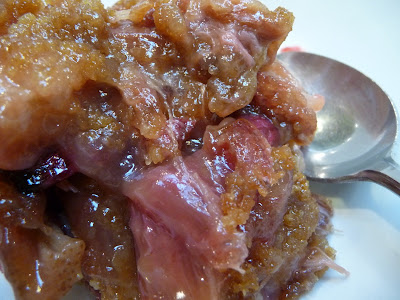 Umm, numm, numm! We had our Rhubarb Crumble with afternoon tea and various wishes for a Happy Mother's Day. My Mother's Day will be complete when I can sneak back in the kitchen and scrape the cooked-to-brown bits off the edges of the pan: 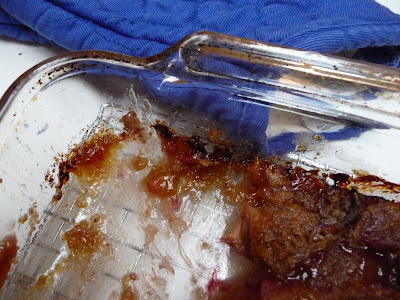 So here is the recipe, with my remarks in brackets [like these]. The original recipe is from the May 2009 issue of "O, the Oprah Magazine." It is very simple, so don't be afraid to try it, even if you're a beginner. Your mom will love you for it!
Rhubarb Crumble

1 C. packed light brown sugar [That means press it down into the measuring cup. Brown sugar is always measured in this way.]

1. Preheat oven to 375 F. To make filling, put rhubarb, granulated sugar, 1/4 C. flour, and vanilla into a 9"x13" baking dish and toss well to combine; set aside. [Since I was splitting the recipe between two smaller casserole dishes, I tossed the filling in a bowl, then poured it into the two dishes.]

2. To make crumble topping, put remaining 1 C. flour, light brown sugar, butter, and salt into large bowl and toss well. Using your fingertips [or a pastry blender], rub butter into dry ingredients until mixture resembles coarse meal. [At this point the original recipe calls for squeezing the topping together in small handsful, then scattering them across the top of the rhubarb. I say nuts to that! Just dump the topping over the rhubarb; et voila! you're finished.]

3. Bake until rhubarb is very tender and bubbly and crumble topping is golden brown, about 30 minutes. Serve warm with vanilla ice cream if desired; spoon any leftover bowls and eat cold for breakfast. [Hah! mine will not see the far side of midnight! I'm already planning my pre-bedtime raid on the leftovers!]

Makes 8 servings. [Or, the way things go around here, 6 genteel servings and, later on, one pig-out on the remainders!]