Sometimes, you try a new recipe, and it just doesn't work. It happened to me this weekend.

I made some buttermilk-vanilla cupcakes from a recipe that looked good, on paper at least. But as they baked, the cakes poofed up too high, spilled over the sides of the cupcake papers, then imploded and left a little crater in the top of each cake. And the recipe called for NO salt in the cake, which I followed slavishly. What was I thinking? I should've added some salt.

The under-salted, unfrosted cupcakes looked like juvenile delinquents of the cake world: misshapen, shoving into each other, unapologetically ugly. I don't even have a picture to show you, because I didn't want to document how crummy they looked.

Sometimes, however, you can execute a last-minute save. Especially when you realize that frosting can hide a multitude of sins. And that a cratered-in cupcake top is perfect for hiding something yummy.

So I made a caramel glaze (recipe at end of this post): 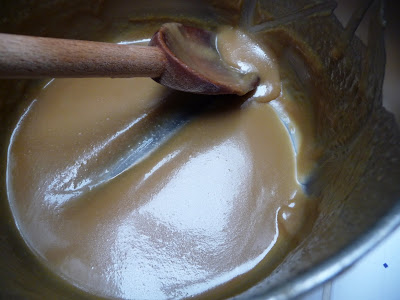 Then poured a little of the runny glaze into the caved-in tops: 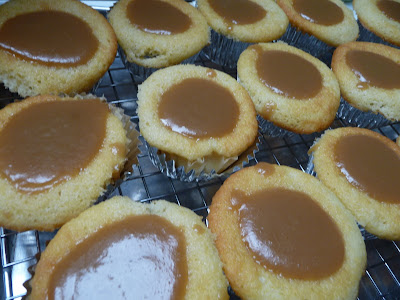 Mmm! Even with the falling-all-over the edges mess going on, these were beginning to show promise: 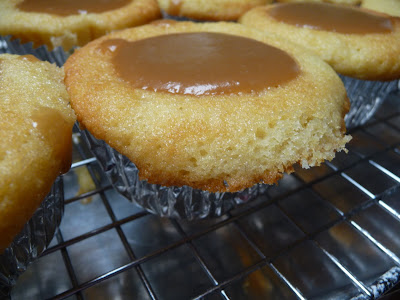 Then, I made a basic buttercream frosting (recipe at end of this post, too) and threw some of the caramel glaze in to flavor it more: 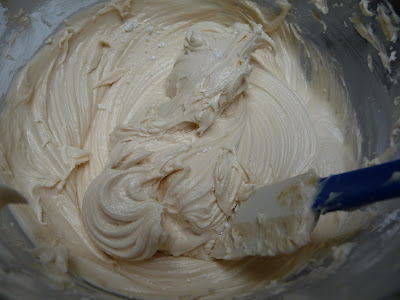 Piped it onto the cupcakes to cover up the caramel "puddles": 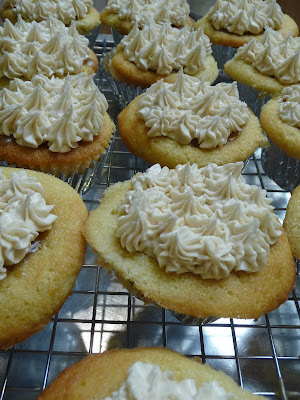 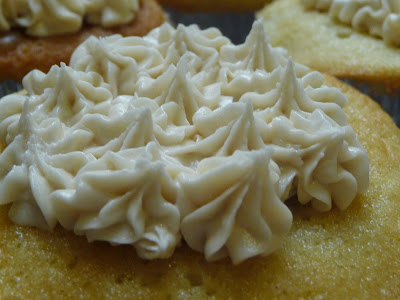 To counteract the lack of salt in the cake, I topped the piped-on frosting with salty, Spanish-style peanuts (the little ones with the skins still on): 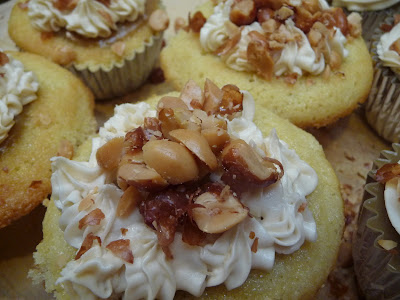 And drizzled a little bit more caramel glaze over everything: 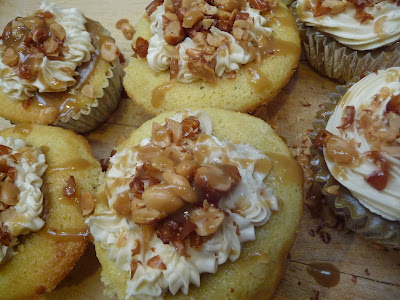 Et voila! Better-looking cupcakes. The tastiest part was from the "shoulders" up, though, where the salt-to-sweet ratio was the best. The bottoms were still...blah. So maybe I'll chop off the under-salted bottoms and just serve the tops: 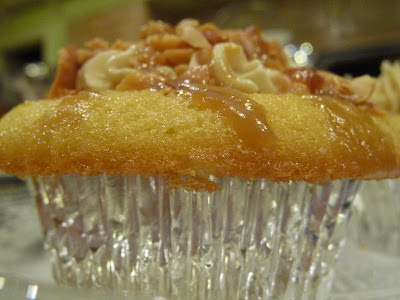 Because half of a delicious cupcake is better than a whole, sort of dumb one.

a pinch of salt

Dump all the ingredients in a medium saucepan and combine thoroughly with a wooden spoon. (Why wooden? I don't know; it just sounds and feels more soothing than a metal one as it moves through the caramel.) Anyhow, cook over a medium flame, stirring frequently, until the mixture reaches a simmer. Reduce heat slightly, cook about 7 minutes more, stirring frequently, until the glaze is thickened. Remove from heat and cool until barely warm. Pour over the top of a cake (or into the sunken tops of depraved, juvenile-delinquent cupcakes), reserving about a third to a half cup for flavoring the buttercream frosting (recipe below) and for drizzling over the frosted cake or cupcakes.

1-2 Tbsp. milk, if needed, for achieving correct consistency (whole is yummier but skim or lowfat will work just fine)

Dump all ingredients into a small mixing bowl, and using an electric mixer, combine thoroughly at a low speed, then increase the speed until the frosting is light and fluffy. Pipe or spread frosting onto completely cooled cake or cupcakes.