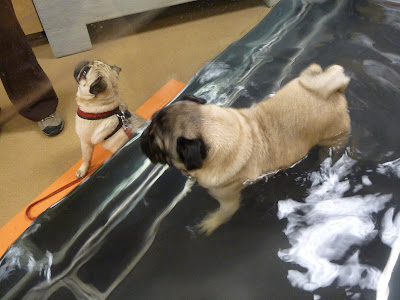 I have a pug with a bum leg. Two bum legs, actually. His front left leg curves in an odd way due to a birth defect. It may be due to poor breeding; we have no idea about his pedigree. His front right leg, however, is messed up because of the cruelty of his former owner, a drug dealer. Police seized the pug as part of the drug raid, and--after a short stint with the SPCA and then a pug-rescue organization--the little furball came to us.

So Won Ton goes to water therapy to help his leg stay strong. Twice a week at first, and now once a week, he walks on a treadmill in a glass box filled with water to his shoulders. That's him, above, chugging along as his brother, Mu Shu, begs for treats from the technician.

The treadmill gently forces him to walk through the water, which adds both resistance (to make his muscles work harder) and buoyancy (to alleviate the wear on his messed-up joints).

The therapy works! His atrophied right bicep has grown from 14 cm around to 16 cm, and his overcompensating left bicep dropped from 17 cm to 15 cm. This means his musculature is more balanced, and the added muscle on his right side does a better job of counteracting the torquing from his injury.

Here's another shot of him, hard at work on the job at hand: 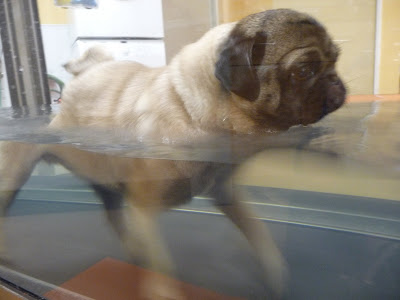 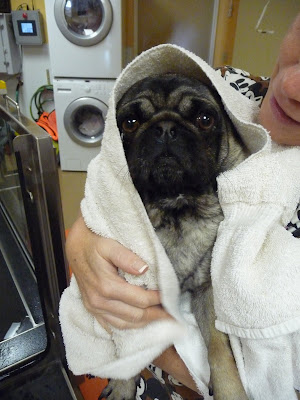 This therapy is neither cheap nor easy to find. In my major metropolitan city of umpty-million people, there are maybe three or four places that do this for pets. I have to drive a half hour each way for the the weekly appointment.

Nonetheless, those of you with pets will recognize instantly that this is worth it. The therapy I purchase for him is nothing compared to the therapy he gives to me, gratis, and with a willing heart.

When he's finished, he gets a toweling-off and lots of hugs and praise from the technician. I love this shot, because he looks like a cross between Rocky Balboa and an Ewok, with maybe a little Flying Monkey from Oz thrown in.
Way to go, Won Ton!
Posted by Juli at 7:05 AM