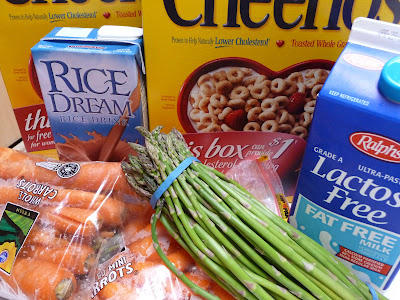 A few days ago I did a mid-week grocery-store run. You know the kind; just a few things to tide you over until the next major expedition. As I stood in line, the man ahead of me turned around,surveyed my stuff (pictured here) and said, "Wow, you make me feel really guilty for buying this stuff."
Now, I wasn't thinking about him or his purchases at all, but since he called my attention to it, I looked. And what I saw was pretty bad: a gallon of full-fat milk, three huge packages of red meat, a pound of pork sausage, one cucumber, one small box of strawberries, a half gallon of bad-quality sherry and a half gallon of bad-quality brandy.
Then I looked at him. Sixty-something, tall, with silvery hair and blue eyes, he may have been handsome once. But he had a gut and bad skin, punctuated with an open sore on his nose. He looked awful.

As he lumbered off, I thought about the evolution of eating well.

Years ago, many of us consumed full-fat milk, pork and red meat on a regular basis. (I've never bought bad sherry or brandy; life's too short for cheap booze!) My two girls, both in their young 20s, remember me serving them TV dinners. All three of my children recall with fondness a certain processed-potato product (rhymes with "gator hots") that clocks in at 1 gram of fat per bite!

But for those of us who have heeded the health warnings, eating patterns have changed. We drink nonfat or 1% milk, maybe even soy or rice milk. We eat less red meat and less fat. We've lowered our salt intake and raised our fiber intake. After diets too heavy on the overprocessed and the oversalted, we've learned to eat (and cook) more the way our great-grandparents did: fresh food, simply prepared, with a minimum of additives.

There's still room for indulgence in this way of eating. Not a day goes by in my life that doesn't include a bite of chocolate. I enjoy a glass of wine several times a week. If I'm going to bake, be it cake or scones or cupcakes, I'm going to use sugar and butter. No nondairy substitutes, no pseudo-sugars with their scary, polysyllabic ingredients.

But even with these indulgences, I am eating well and eating healthily. The silver-haired gent with his jugs of bad booze? He's...well, he's just eating. And when I'm his age (I'm guessing that's 10 or 15 years from where I am now?), may Providence strike me down if I EVER complain about going home to babysit a grandchild!
Posted by Juli at 11:42 AM