I'm going to be honest: I have a semi-food-fear of cooking red meat. It's mainly that I just don't have much practice, seeing as I don't eat much red meat. If I'm going to eat some yummy beef thing, it will probably be at a restaurant. Forget cooking lamb or goat or anything else like that... I'll leave those up to my friendly neighborhood Indian restaurant.

And yet, traditions must continue. So at the market yesterday I bought a hunk of corned beef, intent on cooking it up for St. Patrick's Day. I had no idea what to do with it, and so went poking around on allrecipes.com until I found a recipe that looked good and didn't call for a "spice packet that came with your corned beef." Um, no? I bought my beef at a meat counter!

Then my housemate Julie had the genius idea of using her Crock Pot, so I didn't have to be up tending a pot of simmering beef for three hours. Upon further inspection, I found a video made by allrecipes.com that showed all the steps of making corned beef and cabbage in a slow cooker! Yay!

Here's what I did, based on an amalgam of the recipe, the video, and Julie's suggestions: 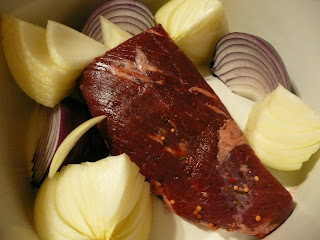 Into the slow cooker bowl, I put my hunk of beef fat side down. The piece was about 0.7 pounds, including a thick layer of fat. I didn't trim off any of the fat mostly because I know nothing about cooking meat and decided that it would probably flavor everything and if it was too fatty I could cut it off at the end.

Cut 1/2 a white onion and 1/2 a red onion into chunks and threw those in too. I'm sure a full white onion would be more authentic, but that's just the scraps we had in the refrigerator and I hate cutting into something new when it's not necessary. 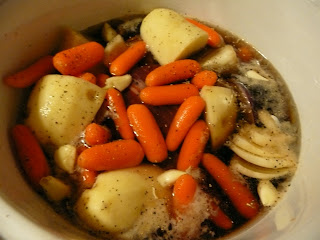 I only had one potato, but I peeled it, cut it in quarters, and added it anyways. Couldn't hurt.

I'd run out of carrots from the last time I made roasted root veggies, so a few handfuls of baby carrots had to do. And hey--I'm lazy sometimes, and this was easy. Smashed and peeled about five cloves of garlic too.

Then, what I've decided is the magic step: Poured in a bottle of Guinness! Yum. Supposedly this makes everything taste a lot better and makes the beef more tender. I figure it's fun and yummy. Added enough water to totally cover the 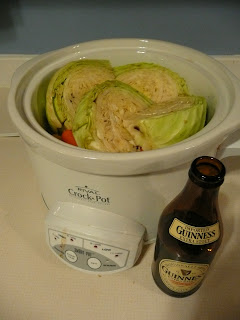 meat, but some of the veggies were left uncovered. Sprinkled salt and pepper all over, and really wished I had a bay leaf. (Note to self: add on mental shopping list!)

I cut half of a huge head of cabbage into quarters and laid them on top of the whole mess. I like steamed cabbage, as opposed to boiled, so I'm hoping that they don't get all mushy while the thing cooks overnight. Julie said hers didn't, so that's a chance I'm willing to take!

Set the slow cooker on cooking for 10 hours at super low heat. I'm headed off to sleep, but hopefully there's an Irish feast ready when I wake up! This will be a really exciting and yummy lunch tomorrow. If only I could bring a Guinness to work. :) 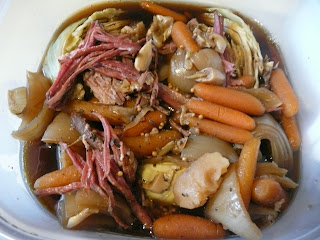 UPDATE: My stew turned out overcooked, but still yummy. Definitely would redo this dish, but for only 6-8 hours in the slow cooker. The meat was literally falling apart, which can be good, but I was hoping to cut it in slices across the grain. That was a no-go. The veggies were pretty much all soft and brownish, which wasn't exactly what I was looking for. Should've taken the video's advice and only added them for the last hour or two of cooking. It's still good--I ate it for lunch today and I'll be having more tomorrow--but not quite what I was hoping for. Oh, well. There's always next time.
Posted by Alana at 10:45 PM