Alright, so now that I'm back, I have a bit of catching up to do!

I worked all summer at my home-away-from-home, the summer camp at which all of my siblings and I grew up. It was almost eight weeks of craziness and happiness and frustration and joy, but it didn't leave me too much time to feel like writing.

One reason was because we finally renovated our dining hall! We spent three crazy weeks feeding 300 people in a giant tent before we got to move into this beauty. It's the same size as the old dining hall, but a whole wall of doors and a skylight really open up the space and make it feel much bigger. A huge wraparound deck provides a lot of outside space, and a double-sided fireplace is going to be really cool for winter camp. Here it is set up for Shabbat dinner at the beginning of July, our first meal ever in the new dining hall: 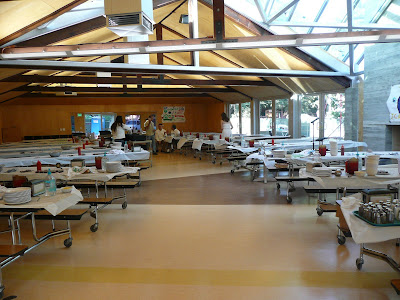 See those gorgeous umarked floors? The perfectly lined up tables? Yeah, it doesn't entirely look like that any more. But it's close. And I still think it's beautiful.

Another thing I did as kitchen manager was help staff use the kitchen for whatever hair-brained crazy ideas they had. This usually happened on Friday night, when my friend Daniel would want to cook something for an all-staff program at 11pm. A few friends would join in, and pretty soon there'd be ten people wearing nice white clothes cooking and getting my kitchen all messy. These evenings usually had themes, and the food would follow. We made fish and chips, scones with clotted cream, and mushy peas for the Brits. We made flatbread, chickpea stew, beet salad, cabbage slaw, and baklava for a Moroccan-inspired feast.

I was pretty excited about the beets, they were just dug up from our camp garden! 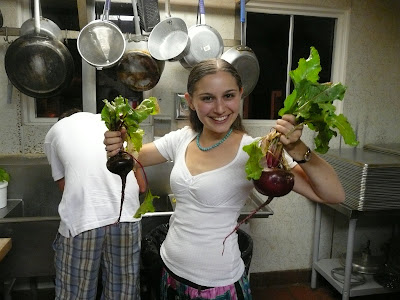 We even made a ginormous pot of amazing chicken stew that took so long to cook that we never ended up serving it to staff that night. Instead, it went in the kitchen window as an alternative for Saturday's lunch and I ate it for about six meals straight that weekend. It was so damn good. 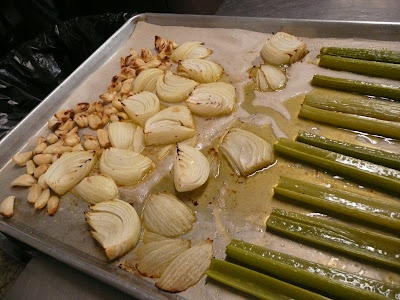 One week was 60's themed, so I decided to make tie-dye cupcakes. Which meant that I got to use my greatest love... the Hobart mixer. Hobart mixers and I started our love affair in the fall of 2005 when I moved into Synergy. We got pretty serious in 06-07 when I was the kitchen manager, but we've had a falling out since. Thank goodness this huge beautiful mixer rekindled a summer romance. I don't know what I'm going to do without it in my life any more. Just shh, don't tell my Kitchen Aid it's inferior, okay?

The basic concept of tie-dye cupcakes is you make a light colored cake batter, split it into smaller bowls, and dye the bowls each a different color. Here are Daniel and Kara showing how it's done: Now you just spoon a bit of each color into your cupcake papers, one by one. I think this tray started with green, then yellow, then blue. It's still missing its red. We baked a whole lot of cupcakes. Eight dozen, to be precise. Because hey, there are a lot of staff. The tops of the cupcakes looked pretty weird when baked. Sort of Jackson-Pollack-with-a-golden-crust, very unnatural. But the insides were fun! Layers of different colors with a bit of tie-dye mixing thrown in. They actually came out pretty well. Of course another reason I loved being in L.A. this summer was spending so much time with family and friends. These lovely people made me so very happy. Summer just wouldn't have been the same without them. 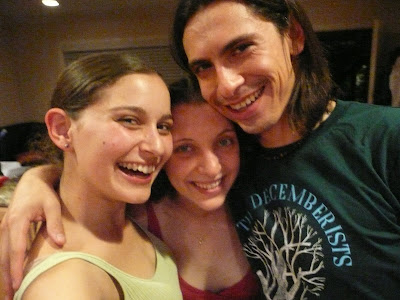 Now, as much as I hate to admit it, summer is coming to an end. Especially up here in Seattle, it's becoming cloudier, cooler, and more blustery. I want to hold down pages of my calendar and shout, "It's still August, damn it! It's still summer!" But that's not working very well. So here we go, headlong into fall....
Posted by Alana at 3:35 PM