During these late-summer days, near dusk, I go outside to look for one of my favorite neighbors--the orb-weaver spider. A smart gardener welcomes orb-weavers; they eat tons of bugs, and they are a sign of a healthy garden in harmony with Nature. No spiders in the garden = something is wrong.

There are more than 3,000 different species of orb-weavers worldwide. My little neighbor is a potbellied thing, with a body several mottled shades of orange. Bands of orange and cream on her legs make her look like she's wearing striped over-the-knee socks: 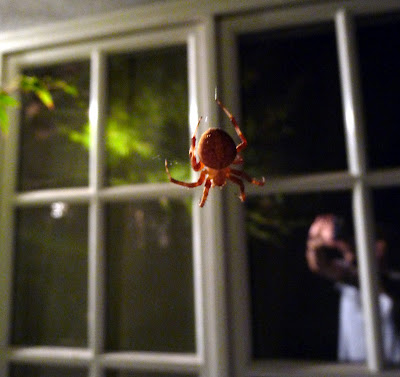 Every evening when the sky turns to cobalt, she descends from her hiding place in our Japanese Maple tree. She tiptoes down to its outermost leaves and gathers herself. Then, like like a tourist jumping off a New Zealand bridge, she leaps far out into space with a strand of silk spooling out behind her. She lands unerringly on a bush or a plant below the tree, swiftly attaches her line, and just as swiftly scoots back up it to repeat the process again. 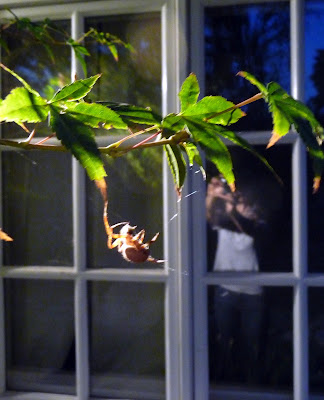 Jumping, spooling out line, and scrambling back up, she builds an array of intersecting lines, all crossing at one central point. 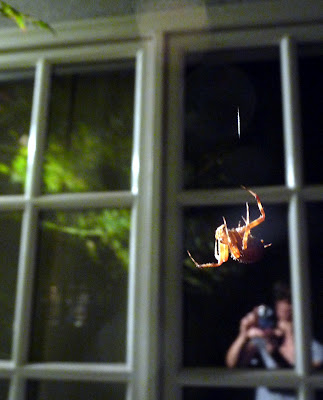 When she's satisfied with that, she goes to the center of the web, changes gears, and spools out sticky silk, deftly pulling it with one free leg and tacking it down to the radial lines with the other. (Cool fact: Some orb-weavers can create as many as eight different types of silk over their lifetime!) 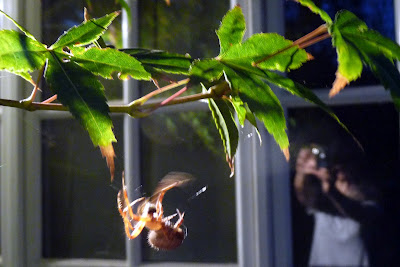 Her legs a blur, she reminds me of a little old lady knitting at a furious pace, never missing a stitch even though she isn't looking at her work. 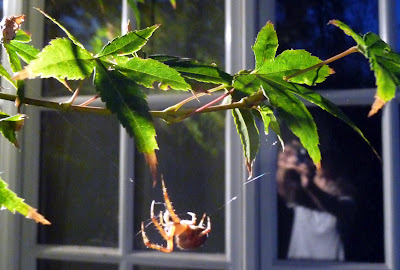 By nightfall she has built a huge, perfect web some three feet across. She sits in the center and waits for unwitting bugs to fly by. The garden lights and my camera don't seem to bother her; she's intent on her business. 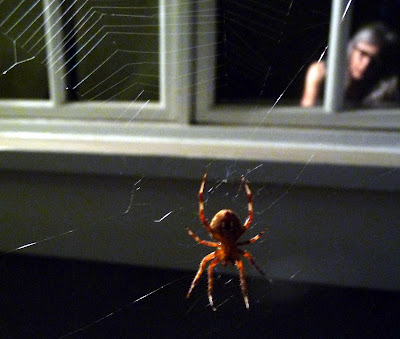 But if I breathe too close to her web, she's off like a flash for the cover of the maple leaves. She can tell I'm no juicy bug! 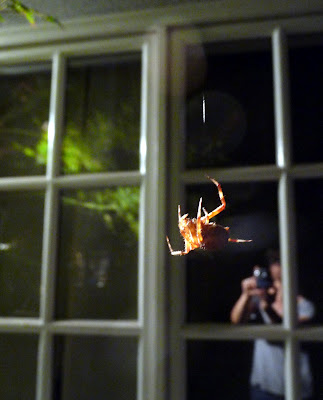 By daybreak her work is done. As the sky turns from cobalt to cornflower, she decides to pack it in.

She expertly cuts a few lines on her web, the entire thing collapses, and she reels in the silk until it's a neat, tidy bundle about the size of a house fly. Her speed is uncanny. I've clocked her taking down an entire web, more than three feet across. From start to finish, it only took her 90 seconds! 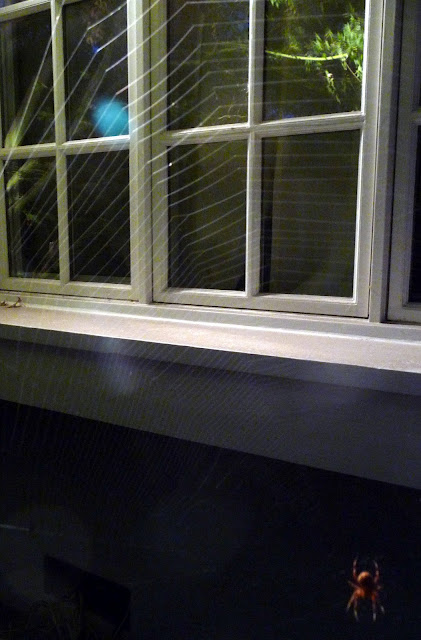 I wondered what she does with the bundled silk. Wikipedia provided the answer: many orb-weavers eat their webs each day so they can conserve their resources and spin another web. How very efficient of her.