When I was 10 years old, my family took a once-in-a-lifetime trip to Europe. One of the things that I remember most clearly is the number of homeless cats in Venice. Scared, scrawny, dirty cats slithered around corners and darted away in fear everywhere we walked.

It was awful. I wanted to open a cat sanctuary to help the critters. Of course, my family lovingly laughed at my childish idea.

So imagine my surprise when The Hubby and I were walking around an area of ruins in Rome that date back as far as the 4th century B.C.E., and I start seeing cats. Cats everywhere!

Cats drinking water from carved wells in the company of ancient frescoes: 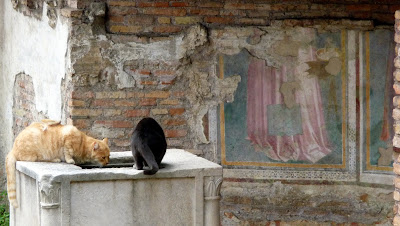 Cats sunning themselves near toppled pillars: 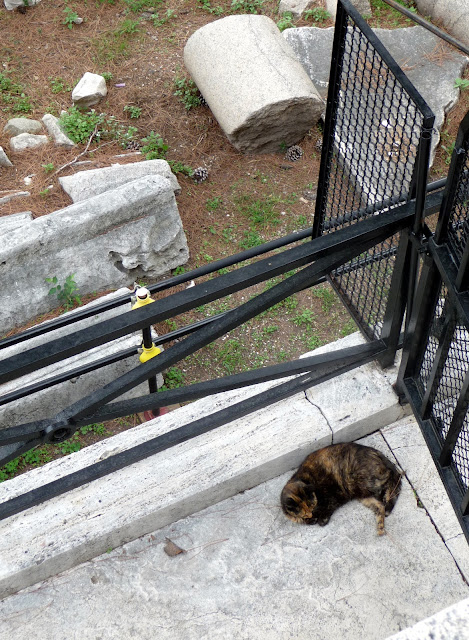 Kitties resting on the tops of ancient walls: 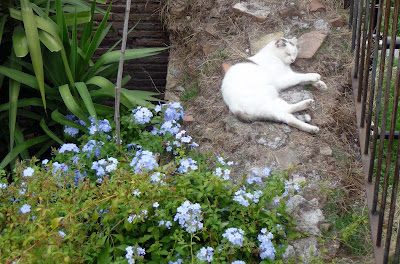 "Heh!," I thought. "This is a crazy amount of homeless cats to be in one place!"

Then I saw a beautiful, lactating mamma cat with only three legs. Who appeared to be very healthy (despite the missing limb). And I knew Something Else was going on: 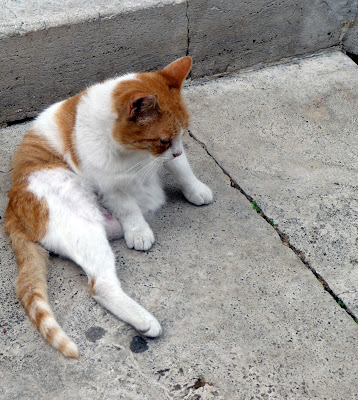 We'd stumbled on Torre Argentina, a partially sunken area the size of two modern city blocks, and part of ancient Rome. In fact, Julius Caesar was killed right here, where now very well-fed kitties are running all over.

Because they're part of a cat sanctuary! 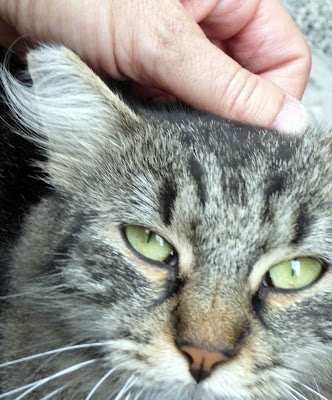 So of course I had to go in and say Hello to the lovely lads and ladies of Torre Argentina: 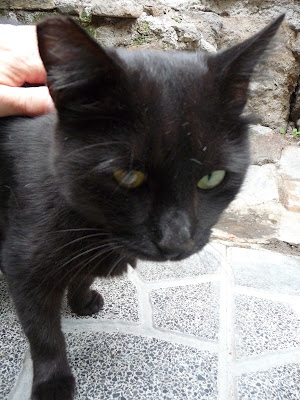 Tucked into a corner of the ruins is a well-run, clean, well-lit office. It was bustling with volunteers, vets, and office workers, because these cats are all up for adoption. The Hubby looked slightly bemused as he stood in the middle of all this happy hubbub: 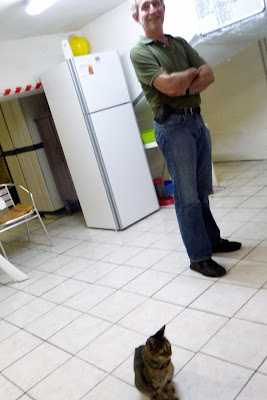 The ruins are a magic place, full of history and intrigue (and murder!) and the milk of human kindness: 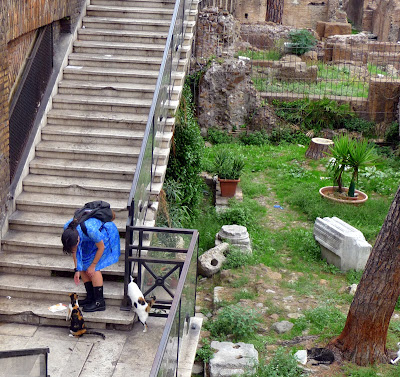 Elsewhere, we saw the occasional cat--and a few pieces of cat art, like this ancient Egyptian statue in the Vantican Museum: 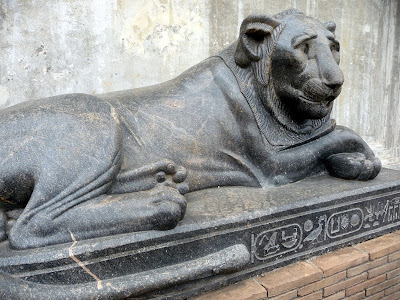 These two characters were casing out the goods at a butcher's shop that was open at night: 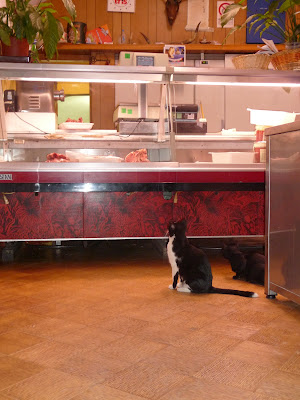 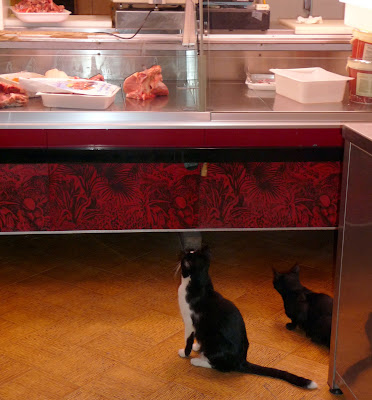 I love the bemused expression on this kitty, near a dock where we took the boat over to Capri: 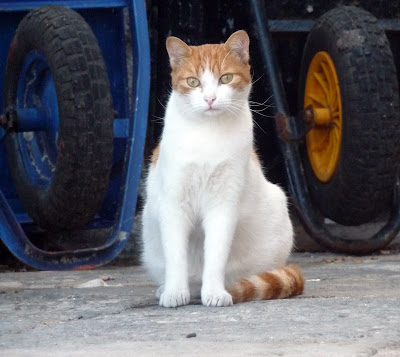 This one-eyed monkey was playing around with some cables that construction guys were flicking for his amusement: 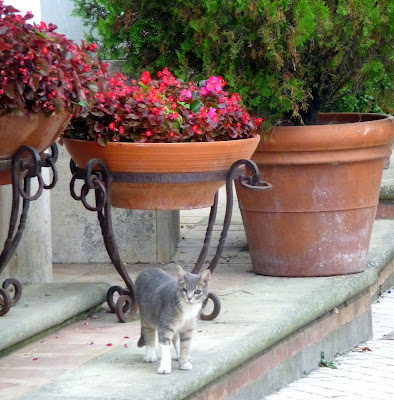 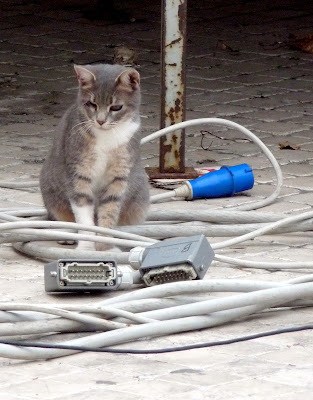 And this slightly odd-looking cat is part of a huge mosaic floor in a church in Sorrento: 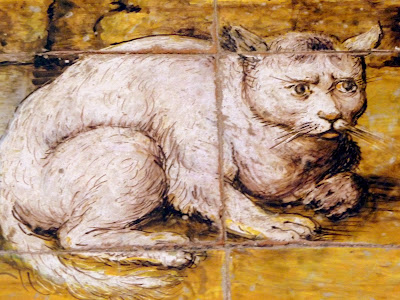 This little guy really got to me. We were hiking down a lane, and he was wandering around looking lost and scared of us but clearly wanted human company. He kept getting *almost* run over by tiny cars whizzing by, because it was pick-up time at the local elementary school: 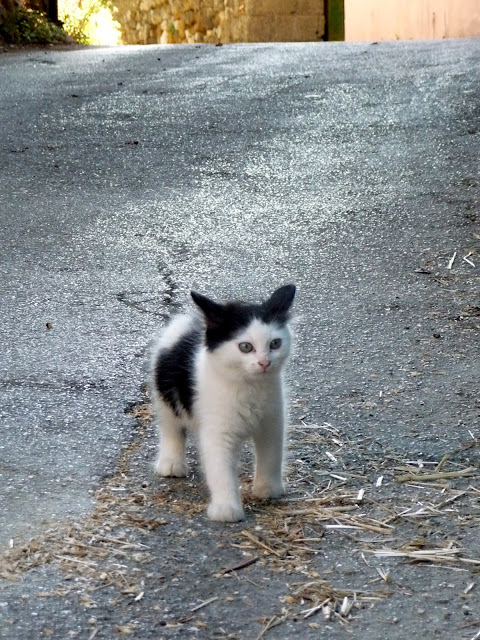 And when we did pick him up (to get him out of harm's way), he was NOT amused: 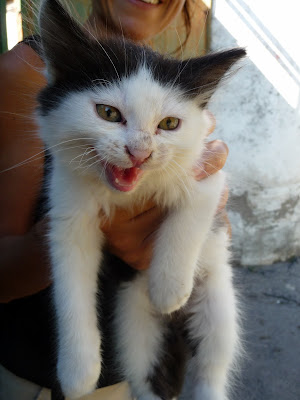 Somebody needs to tell him about Torre Argentina.