The calendar says it is officially Autumn, but it's no surprise to Angelenos that the weather here in L.A. is still scorching. September is often our hottest month. Argh! I can't wait for it to actually be chilly here, so I can start cooking (translation: eating!) my favorite Fall flavors.

They're great, but the flavors I'm dreaming of now are those second-stringers. These are ingredients that don't get star billing in a dish, but they make food taste like Fall is officially here.

First up on my list of favorite Second Stringers is Rosemary: Rosemary's strong, almost turpentine-y taste is the perfect mate to the stronger, heartier foods we love in cold weather. When there's a cold snap, that's when I appreciate rosemary the most.
Nothing transforms a roast chicken like rosemary. It's just that simple. Tuck a sprig or two into the chicken's cavity along with a squeezed half lemon and a sprinkling of sea salt and freshly ground pepper. Fantastic! Chop fresh rosemary up and toss it with cubes of peeled Acorn or Butternut squash, a drizzle of olive oil, and some salt and pepper. Roast in a single layer on a pan. Transformative!

Next up in my list of I Love Them, Too's: Pepitas, also known as pumpkin seeds: 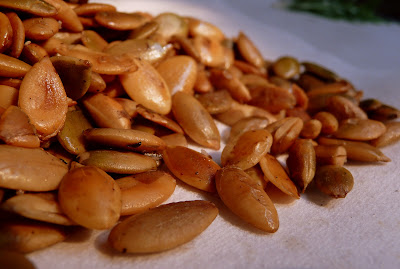 Like rosemary, shelled pepitas are available all year 'round in our grocery stores. But their nutty, earthy flavor absolutely sings of Autumn. Toss them in a little bit of olive oil and toast them on a cookie sheet or in a cast-iron pan. They're done when they turn a beautiful golden brown and smell like...well, like roasted pumpkin seeds. Spread them out on paper toweling to cool and season with salt and black pepper. Use the flavored seeds in a salad, scatter them over hot pasta or thick, hot soup, or just serve them as a snack paired with a glass of apple cider or a crisp white wine.


Next up, Sweet Potatoes. Oh, how I love these darlings, loaded with Vitamin A, Beta Carotene, and fiber. For a memorable twist on an old favorite, parboil sweet potatoes, push them through a ricer, then swirl them into a creamy risotto. Add chunks to a hearty lentil soup, a hefty beef stew, or a plate of hot pasta. They not only taste like Fall personified, but with their happy orange color, they look like Fall, too: 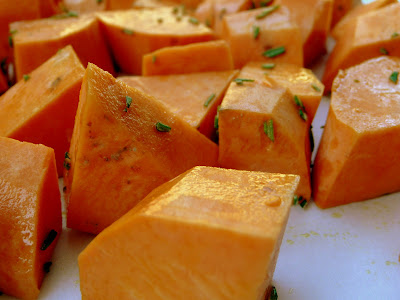 Last up, New Potatoes, Baby Potatoes, Fingerling Potatoes. Wonderful little critters, whatever you call them. My mother used to serve these in springtime with lamb and new peas spiked with mint. Nice, but to my way of thinking, little spuds like these are the workhorses of autumnal cooking. Unlike their big cousins, they cook up in a flash--less than 15 minutes if you're cooking them in boiling water, maybe no more than 20 minutes if you roast them.

Try them sliced thin (along with our friend, Rosemary) to elevate a store-bought pizza for a fast weeknight dinner. Parboil them, cool them, cut a tiny slice off each end, then cut them in half to serve as the base for a bite-sized appetizer. Or parboil them, smash them lightly with a fork, then fry them in hot oil and serve with cold Blue Cheese dressing for a hearty snack. Add some cooked fingerlings to a hot pasta dish for a change in texture. Chop up little potatoes with leftover meat for a breakfast hash. 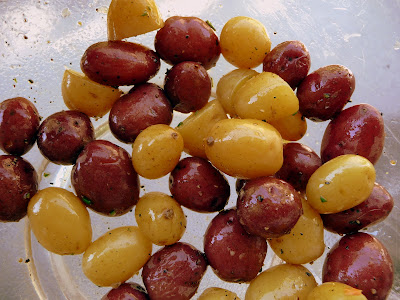