Cinnamon and apples: Two flavors that conjure up the delights of fall food.

When I was in Boston recently with Lovely Daughter #2, we put made a chewy snack that uses only three ingredients and tastes like the best of fall.

Wash Granny Smith apples (you need apples that are nice and tart for this). Slice them very thinly, cutting them parallel to the "equator," so the middle slices end up having that pretty five-point star. Dredge them in the cinnamon-sugar mixture. 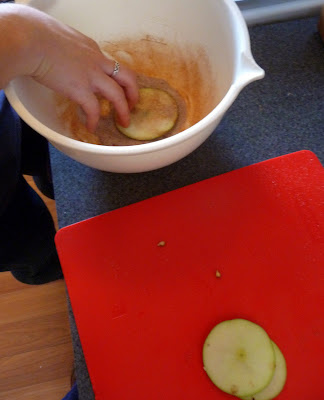 Arrange the apple slices on a parchment-paper-lined cookie sheet, and pop them in a very low (250 degrees Fahrenheit) oven. The temperature is so low that you are sort of drying them out, rather than cooking them. 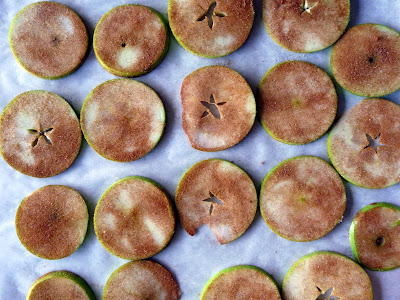 After a few hours (our apples took four), you have a chewy, yummy snack that tastes like a slice of apple pie. But there's no mess, making this treat perfect for packing in a lunch bag, or taking on a hike--because most of the water content has dried out, they are very lightweight. 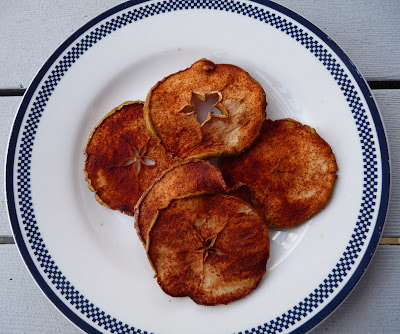 We agreed that, after sampling the batch we did, we could've dialed back a bit on the cinnamon. And when I do them again, I will peel the apples before slicing. I just prefer them that way. 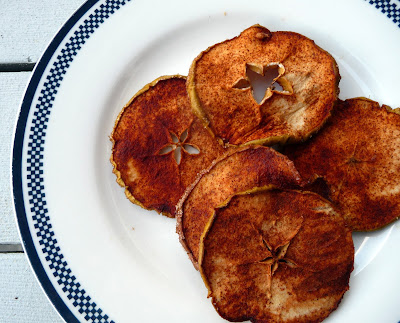