Today, March 25, 2011, marks the 100-year anniversary of the Triangle Shirtwaist Factory Fire. ("Shirtwaist" is an old-fashioned word for blouse, like the one in the photo below.) 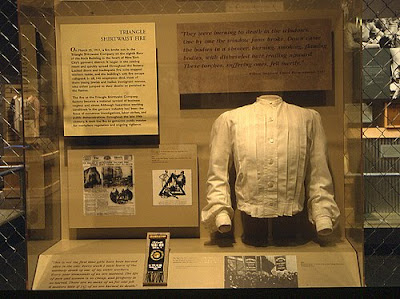 photo credit: National Museum of American History
The Triangle fire was the single worst workday catastrophe to befall New York City (until the 9/11 attacks). On this day a century ago, a small fire broke out in a pile of cloth scraps on the eighth floor of the downtown factory, then quickly spread to the ninth and 10th floors. In minutes, the blaze turned deadly, and a total of 146 workers died. Most of them were recent immigrant girls in their teens and twenties. 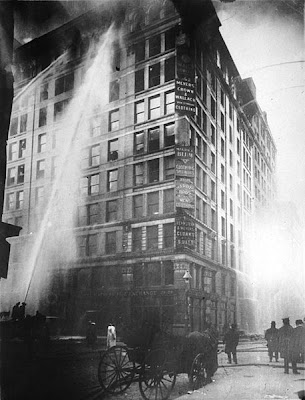 photo credit: Wikimedia Commons
Illegally locked exit doors, flimsy fire escapes that collapsed under the weight of panicky workers, doors that opened inward, not outward, and a faulty communication system all contributed to the horrors of that day. The victims died from suffocation, being burnt alive, or--most piteous of all--leaping to their deaths from eight floors up, because NYC firefighting ladders could only extend up six floors. 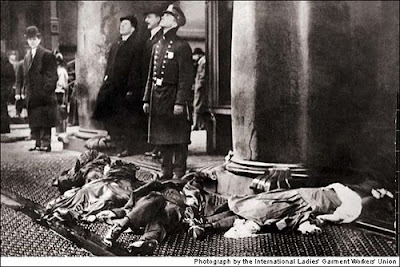 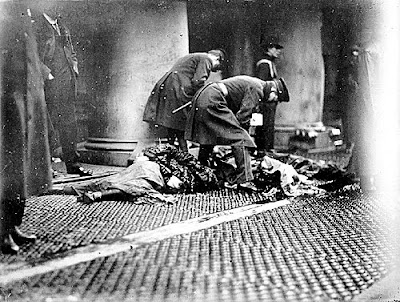 photo credit: Unknown, but I found this image here
The next time you walk through a door that says, "This door to remain unlocked during business hours," take a moment. Pause and think of Tillie, Margaret, Max, Yetta, Mary, Nellie, and all the other young people who died that day. 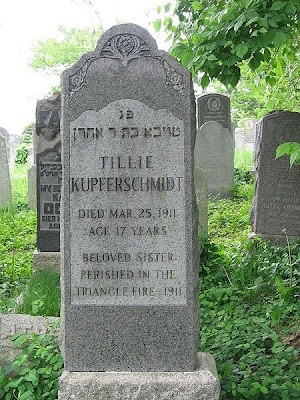