All three of my dogs are full-blooded pugs, but only Mu Shu, the middle one, actually has a pedigree, AKC registration papers and all.

Now, y'all know I'm a big fan of rescuing homeless pets. I'd never buy a dog from a breeder. Mu came to us when the gal who paid big bucks for him realized she couldn't keep him. And so he became ours.

Sometimes we joke about how gorgeous he is, and we comment on his "dog show walk"--an unmistakable, prancing, look-at-me gait that our other two pugs simply don't possess.

Other than that, I don't think about his fancy-shmancy background.

Until today, that is. I was watching the Westminster Kennel Club finals, which I had recorded. The other two pugs looked briefly at the TV, then lost interest.

Mu Shu, however, was transfixed: 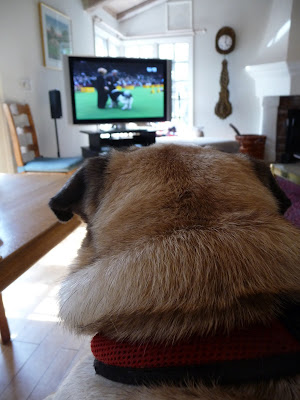 He couldn't stop staring at the trials. It seemed to strike a chord, deep inside him. It was as if a bell chimed that only he could hear, and at the cellular level, his DNA just quivered with recognition! 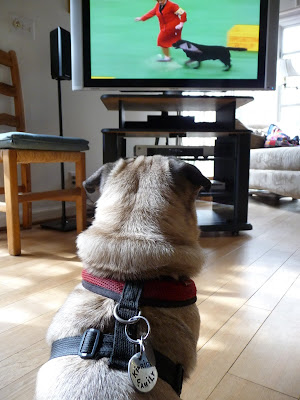 He watched and watched, and then... 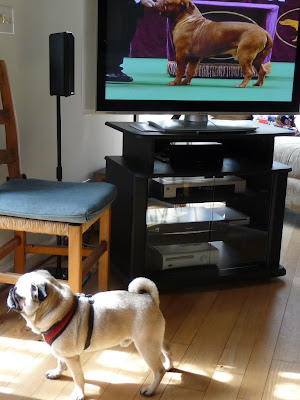 I saw him strike this pose: "I, Mu Shu, look into my sunny future, when I, too, shall be a champion!" 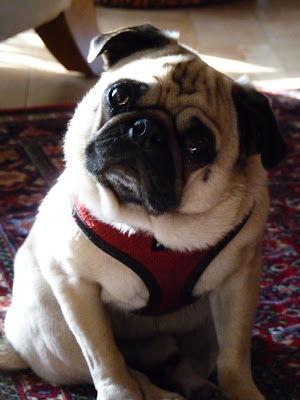