One of my favorite things I did this summer was to paddle the L.A. River.

Yes, Los Angeles has a real river! It's not just a bunch of concrete drainage ditches built to control flash floods. In the summer of 2011, a group called Paddle the LA River began offering the public the opportunity to traverse a 1.5-mile section of the river that has been restored to its almost-natural state. This piece of the river has a gravel bottom, water-loving trees and bushes, and abundant wildlife. The only way to see it up close is in little kayaks: 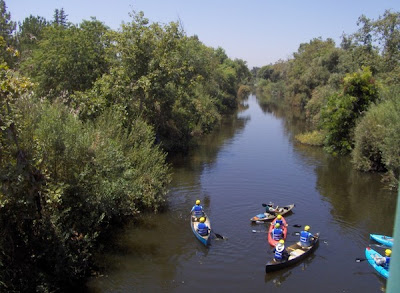 The group takes only a dozen or so lucky individuals downriver at a time. Signup is by lottery online; the available dates for the entire summer fill up within moments of the openings being posted. 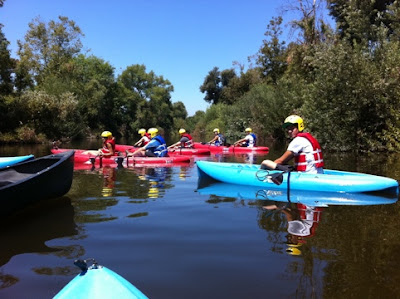 I messed up a bit and hit the "buy" option for one ticket, not two, so The Hubby and I decided I'd do it first. If it was good enough, he'll do it with me next summer.

It was fantastic! We started out beneath a highway overpass, where a bridge throws cool shadows on the shallow water. We got our safety talk, hopped in our little kayaks, and did some practice paddling, turning, and slowing. To make sure we didn't kill ourselves, two members of the L.A. County Swiftwater Rescue Team accompanied us. To make sure we didn't kill the river (heh!), two members of the U.S. Army Corps of Engineers also came along (the Corps has jurisdiction over the river). 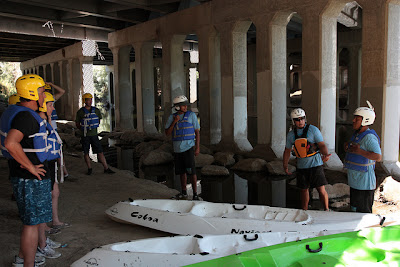 But honestly, all the safety precautions were like wearing suspenders with a belt. Most of the river flowed at a  placid rate, like this: 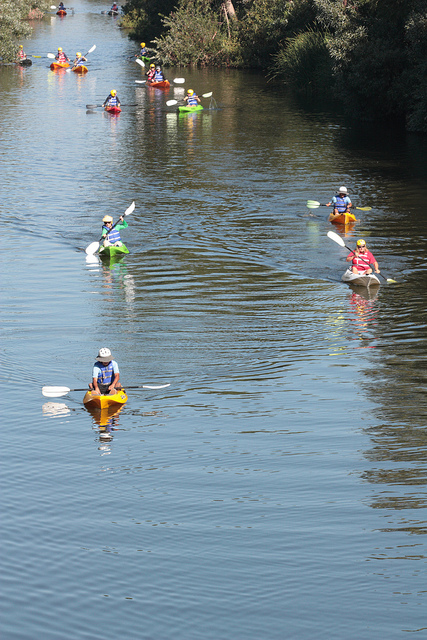 Over the course of the 2.5-hour trip, there were a couple of places where rocks and concrete chunks impede progress, so the nice folks of the Corps and the Swiftwater Rescue got out and pushed/pulled our little kayaks through the narrow spots: 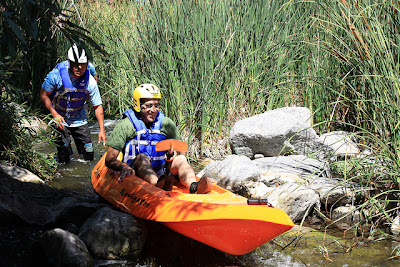 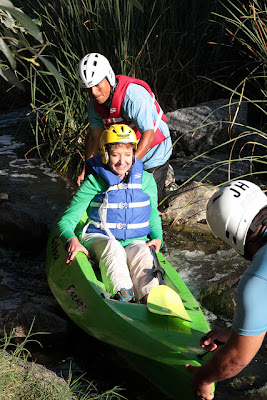 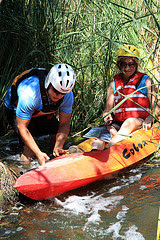 We saw little fishes, turtles, white Egrets, and juvenile Great Blue Herons flapping gawkily about. It was  peaceful and quiet--no loud sounds at all. If we pricked up our ears, we could hear the shushing of traffic in the distance. But mostly what we heard was the water rushing, our oars dipping, and people calling to each other and laughing with delight. 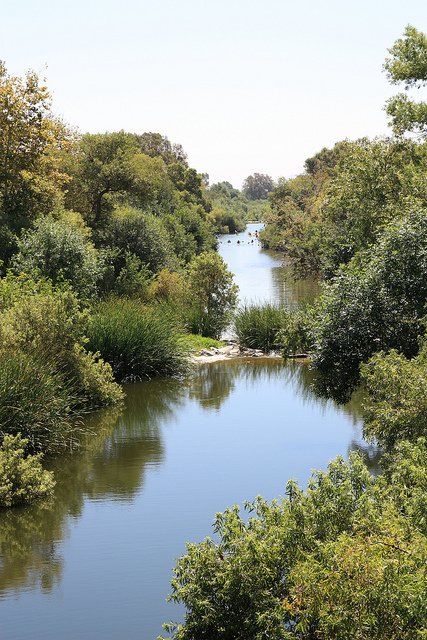 At the end of the trip, we took the kayaks out just above the entrance to the Sepulveda Basin Dam: 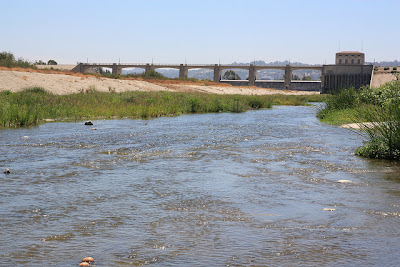 Seeing a piece of this much-abused, chained-up river so close to its natural state was fantastic. It was Nature, right in the middle of one of the biggest cities in the nation. This trip was one of the most unusual things I've ever done--and only a handful of the over 6 million people in Los Angeles have ever had the chance to paddle the L.A. River.

I'm going to sign up again next summer, and next time, I'm bringing The Hubby with me!