Recently I ran across a recipe for a superlative Vanilla Cupcake from a notable L.A. eatery, which I am happy to share with you.

This past Memorial Day weekend, I baked a batch, and boy! are they good. They hardly need icing, they're so tasty.

A quick call to my foodie-blog-loving Daughter #1 confirms that neither of us has seen this.

I'm sure somebody, somewhere beat me to this idea. But the goal isn't to be the first; the goal is to create deliciousness!

So today I tried it, and here's how it went. I used my second-smallest Ateco circular cutter and worked it into each cupcake with a gentle, twisting motion: 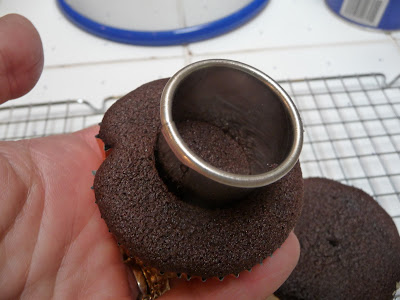 That's about far enough in: 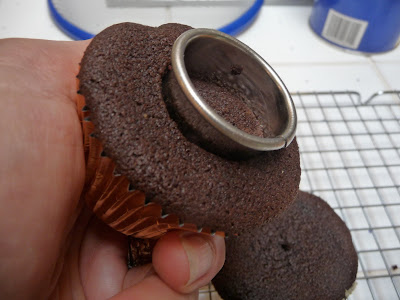 A gentle, rock-and-twist motion brought back up most of the inner core: 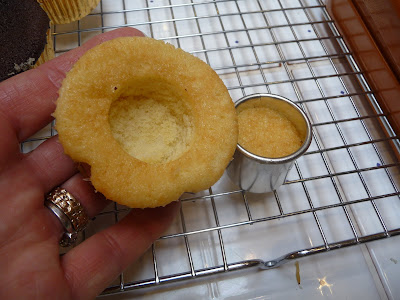 There was a little roughness at the bottom of each core, but that part is going to be covered up soon enough: 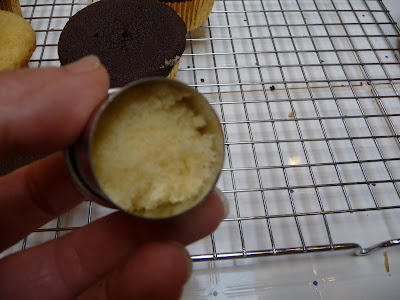 Heh. Sorry about the lack of focus, above. I was so excited about what I was doing, I forgot to check each image to make sure I got it right. Anyhow, a little tap inserted each core into the opposite color of cupcake: 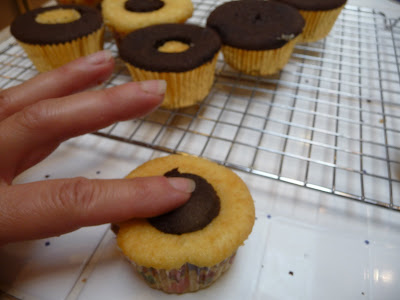 Right about now I start humming "Ebony and Ivory" uncontrollably. Most of the cores have been swapped. I left some cakes whole just for the heck of it: 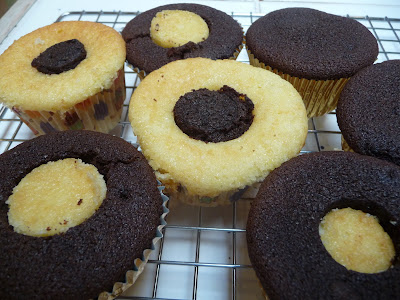 They look like little bull's-eyes to me! Their lack of precision is partly because this is my first attempt at swapping cupcake cores, and partly because I know it doesn't matter much. Because everybody's about to get a two-tone icing: 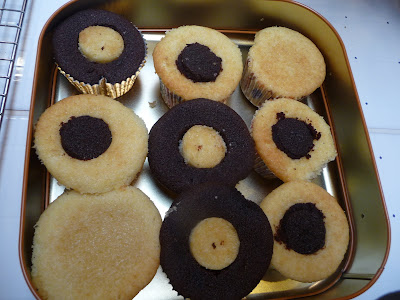 Hooray for icing! I simply made my standard buttercream icing (recipe at the end of this post), then laid half of it carefully down one side of a pastry bag fitted with a large, star-shaped tip. Then I shook some cocoa powder into the remaining icing in the bowl, blended that up to make a chocolate icing, and laid that into the other side of the pastry bag. What comes out is free-form, two-toned icing: 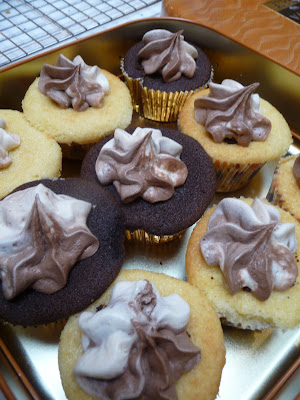 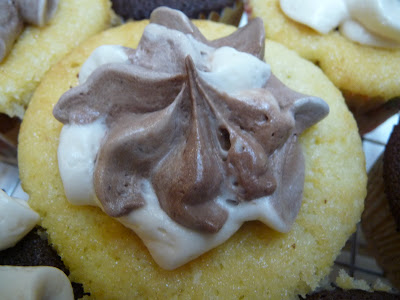 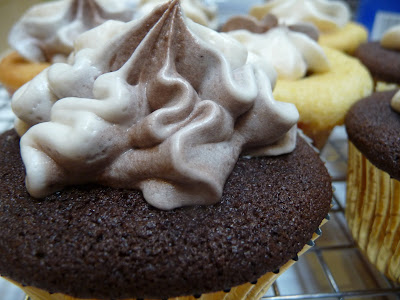 Of course, I should have put everybody in the fridge at this point, to firm up and...meld. But I was too impatient and cut one open immediately. It fell apart: 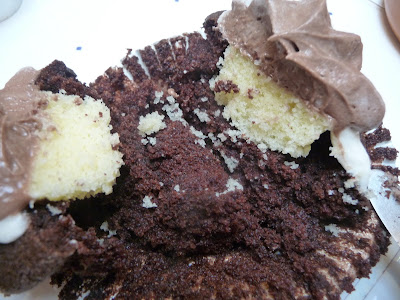 But, lordy did it taste good.

Standard Buttercream Icing
(I got this recipe off the side of a box of cookie cutters I bought a million years ago, and that's all I can tell you about its origin. It has served me well for lo, these many years.)

Combine all ingredients in a small mixing bowl and blend with electric mixer until smooth. If the icing seems too thin, add more powdered sugar. If it's too thick, add a little more milk. Makes enough to fill and frost a two-layer, 9-inch cake, or to frost 2 to 3 dozen cupcakes (depending in how thickly you trowel on the icing.)
Posted by Juli at 3:19 AM