Like so many others, I love almost anything chocolate for dessert. But sometimes chocolate is too heavy, too rich, for the end of a meal. And that's when lemon-y desserts deliver. My hands-down favorite lemon-based dessert is Lemon Sponge Pudding.

This dessert and I go waaaaay back. I've loved it since I was a child, when my mom made it fairly regularly. It is lemony and creamy, pudding-y smooth and souffle-y fluffy, all at the same time

As a child, I appreciated it for its yummy taste and textures.

As a cook, I appreciate it even more for the fact that it is made from the simplest of ingredients, things that almost any kitchen has on hand--milk, sugar, eggs, flour, a lemon.

So you can whip it up almost whenever the mood strikes. No trip to the grocery store needed!

I'll take you through it, step by step, and you can find the entire recipe at the end of this post.

Begin by scalding the milk. "Scalding" simply means heating up the milk in a sauce pot until it forms little bubbles around the edges and a few wisps of steam rise up from its surface: 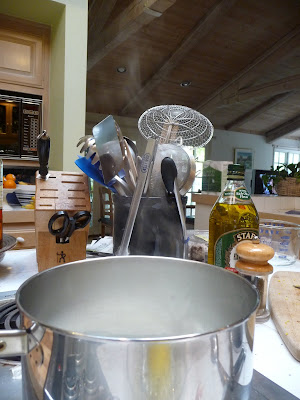 While the milk is heating, grate the rind off one large lemon. (Hang on to that naked lemon; you're going to use the juice, too.) One large lemon yields about 1 tablespoon of rind: 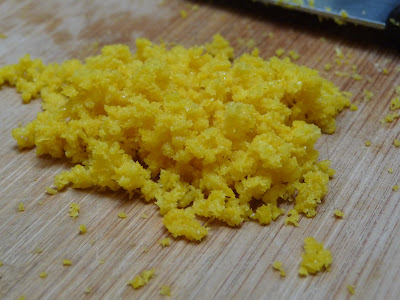 Separate the whites from the egg yolks, putting the whites in a small mixing bowl and the yolks in a larger one: 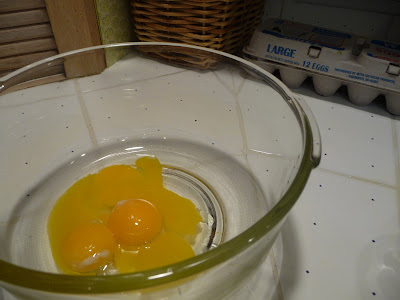 Set the whites aside for a moment, and add to the yolks a mixture of flour, sugar, and salt. You can use a wooden spoon or a whisk for the task: 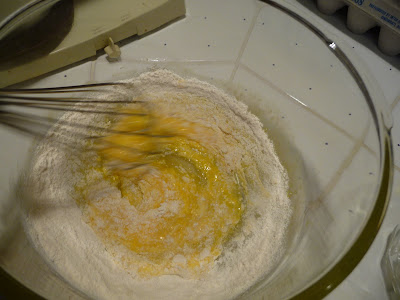 If you use a whisk, you may get to a point where the eggy mixture is trying to hide out, inside the wires of the whisk. Don't get annoyed! Just give the whisk a couple of raps against the insides of the bowl, and the mixture will knock out. (Don't rap the whisk, or any other utensil, on the edge of a bowl; that's the structure's weakest point, and you may end up chipping the bowl.) 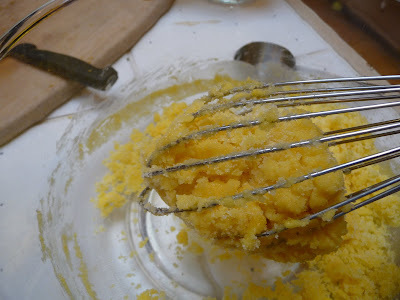 There! It'll look like this when everything is incorporated: 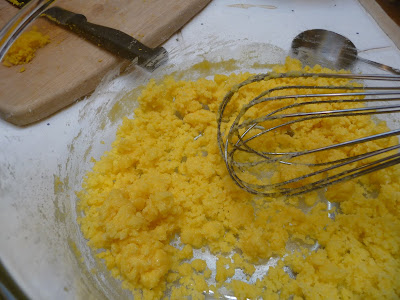 By this time, your milk is probably scalded. Remove it from the heat and add it in a very slow trickle to the yolk mixture, stirring thoroughly as you go. You want the yolks to warm up slowly from the hot milk and not turn into scrambled eggs! Then add in lemon juice and rind. When you've stirred it all in, it will look like this: 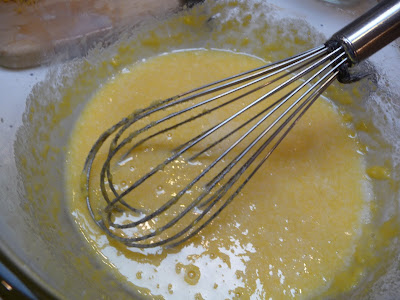 Let the yolk-milk mixture sit for a moment; it's not going anywhere: 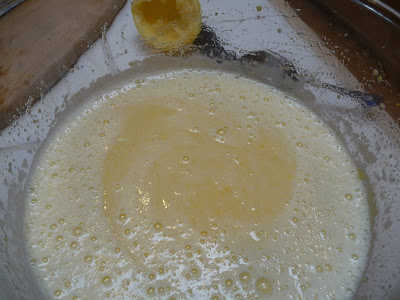 Using an electric mixer, beat the egg whites until they are stiff but not dry. That means when you take out the beaters, the whites retain their exact ridges: 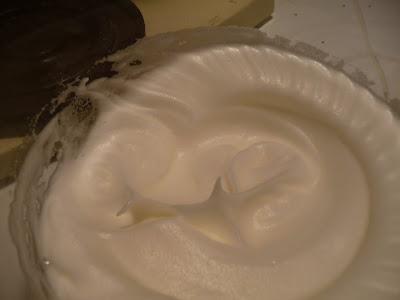 And the beaters have peaks on them: 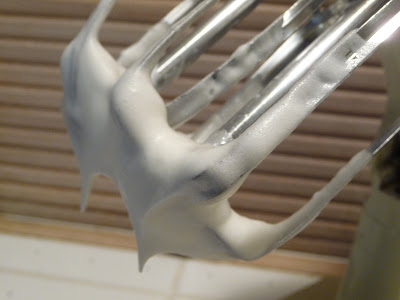 The whites should have a glossy, not a matte, look to them, If you're not experienced beating egg whites, it'll only take a few tries until you begin to sense when the whites are at the right consistency.

Another way to tell the whites have been beaten enough is in the next step. Transfer the whites from the smaller bowl and plop them on top of the yolk-milk mixture. The whites will slide out in a sort of soft block: 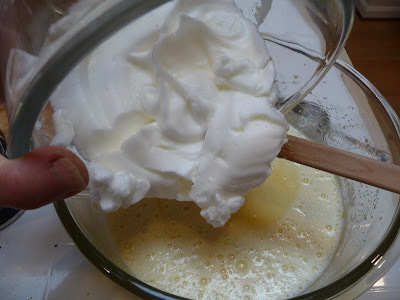 Now, here's the only tricky part of the recipe: folding the egg whites into the yolk-milk mixture. Folding isn't hard at all if you know how. And it's a terrific technique that allows you to create all sorts of airy meringues, souffles, and other very tender foods that call for whipped egg whites.

Here's how you do it:

Hold the bowl in your non-dominant hand (the one you don't write with). Tilt the bowl toward you. (I like to rest it on my hip, kind of like plopping a toddler there.) Using a plastic spatula in your dominant hand, cut down through the middle of the whites, and run the spatula along the bottom of the bowl, then up the side of the bowl closest to you, and with a twist of your wrist, plop the mixture over onto itself back into the middle of the bowl: 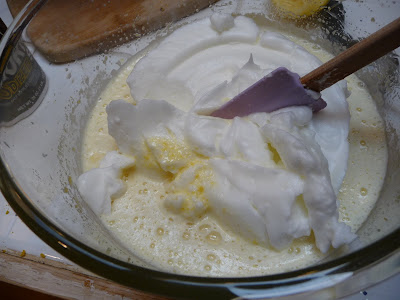 Cut, scrape, and plop, turning the bowl a quarter turn or so each time.

If you want to see a demonstration of this, look at this video of a gal making Belgian Waffles. For her recipe, the egg whites are supposed to be a little softer. But the technique of folding is the same. 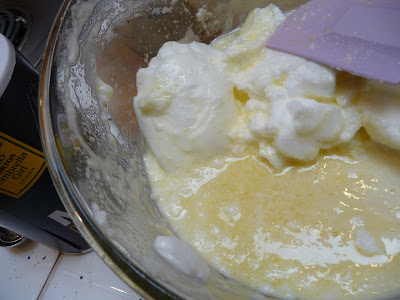 It's going to feel like you're trying to encourage a beach ball to mate with a feather pillow at first. These two things are just NOT going to mesh into a happy, homogeneous mass. But be patient! Tenderly, slowly, keep up the cut/scrape/plop: 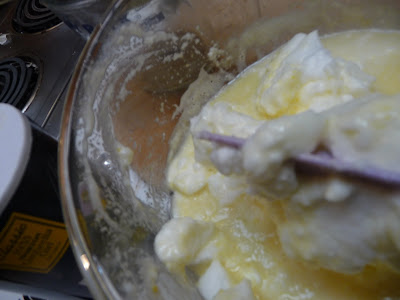 After only a minute or two, you will have rendered the two separate parties into one fluffy, happy marriage. If any of the chunks of white are larger than a ping-pong ball, you are almost but not quite there. Give it a few more folds. If you sense there's a pool of more liquid, less fluffy stuff at the bottom of the bowl, that's okay. It'll all cook up fine. Here's what you should have when you're finished folding: 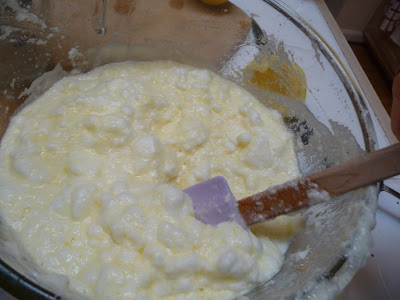 Pour everything into an ungreased souffle dish (a casserole, usually of china or glass, with straight sides): 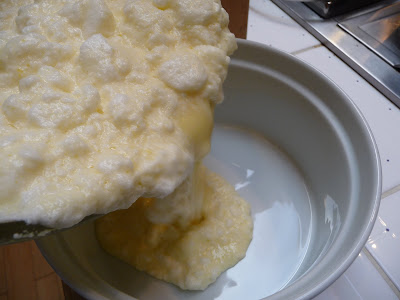 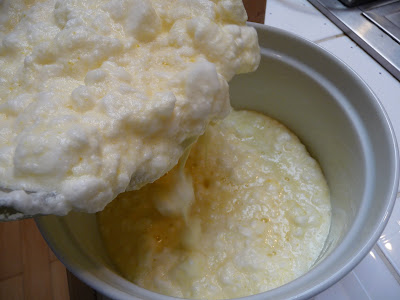 Into your preheated oven, place a large baking pan. A 9x13 glass or ceramic casserole is ideal. Pour water into the pan about halfway up the sides. Then put the souffle dish of pudding into the water bath. Careful not to touch anything--it's hot in there! 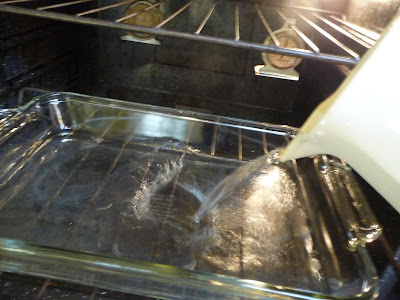 The water bath protects the dessert from scorching on the bottom or sides as it cooks. When it's finished, it will be slightly golden on top. Unlike a classic souffle, it will not climb up he sides of the dish like. It will be slightly jiggly, but the top will feel dry to the touch: 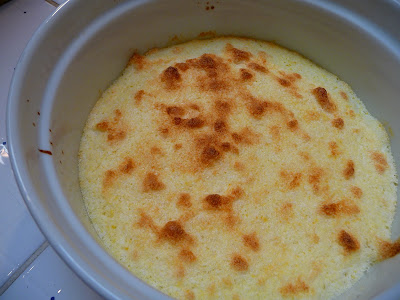 Remove the dish from the oven, let it cool on the counter top for a bit, then put it in the refrigerator to chill thoroughly.

I love serving this dessert after a fish meal, but it is also wonderful at the end of something heartier.

In fact, it's SO wonderful, I forgot to take a picture of an individual serving. We were too intent on gobbling it up! So here's one from somebody else: 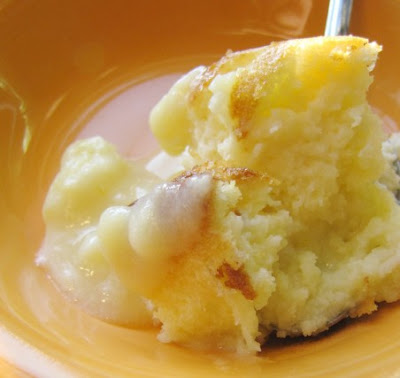 Scald milk in a sauce pot. While the milk is heating up, mix sugar, flour, and salt in a small bowl; set aside. Beat yolks in a large bowl; add the sugar mixture and combine thoroughly. Gradually add the scalded milk to the yolk mixture, a little at a time, stirring constantly. Add lemon juice and rind to the milk-yolk mixture; set aside. In a small mixing bowl, beat the whites until stiff but not dry. Fold the beaten whites into the milk-yolk mixture. Pour into an ungreased 1.5-quart souffle dish.

Set an empty 9x13 casserole into the preheated oven. Pour in enough water to fill the casserole halfway. Close the oven door and allow it to come back to 350 degrees F if it has cooled off a bit. Place the souffle dish carefully in the pan of hot water. Bake for 30 minutes.