A couple of weeks ago, Lovely Daughter #1 was in my kitchen, making herself breakfast. She made granola from scratch. Well, I've done that.

But she made it in a cast-iron pan, and she made just enough for one or two uses. Brilliant!

Whenever I've made granola, it's a big production, with a giant baking sheet, a hot oven, and a lot of bother.

This was quick and easy and so, so tasty. 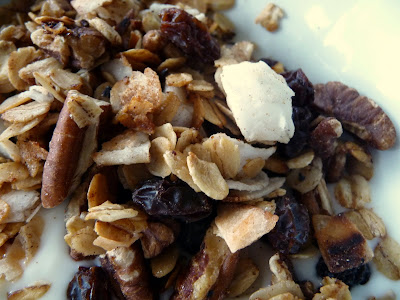 Her recipe, below, is more along the lines of a suggestion than an actual recipe. But it's endlessly adaptable to whatever you have on hand. 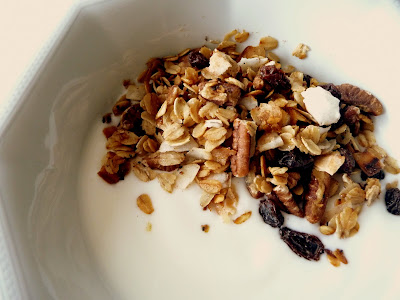 And it's ridiculously easy and fast to pull together. 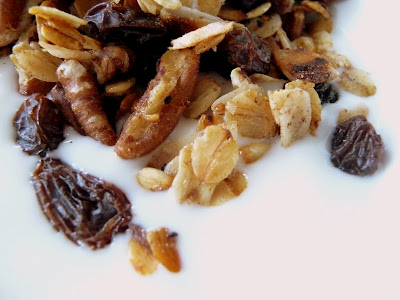 Not to mention delicious.

Granola in a Cast-Iron Pan

In a cast-iron skillet over medium flame, heat 2 Tbsp or so of Canola oil.

Toss in 2 cups of rolled oats; stir them around until they're fragrant and a touch golden (a couple of minutes).

Toss in about 1 cup roughly chopped or broken nuts; stir them around until they start to smell toasted.

Toss in up to 1 cup of unsweetened flaked coconut and/or dried fruit, such as raisins, chopped dates, dried-apple bits, etc.

If you want, toss in some flax seeds (for protein and omega 3s) and/or wheat germ (for Vitamin E).

Stir everything around until it is all nice and fragrant; then add a big pinch of salt and a good bit of ground cinnamon or ginger or some almond extract.

Turn off the heat and add enough honey or maple syrup (or even a bit of molasses, but not only molasses) to make either a loose granola (less honey) or a clumpy granola (more honey). To make the granola clump together more, press it down into the pan and let it completely cool.

Store any leftover granola in an airtight container at room temperature.