I've been collecting cute critter photos over the past several weeks, so I thought I'd share them with you. (Full disclosure: There are photos of a spider at the end of this post, so if that sort of thing creeps you out--I'm lookin' at you, Lovely Daughter #2--well, you've been warned.)

First up, my Boss Pug, Won Ton, and his friend the Peke from down the street: 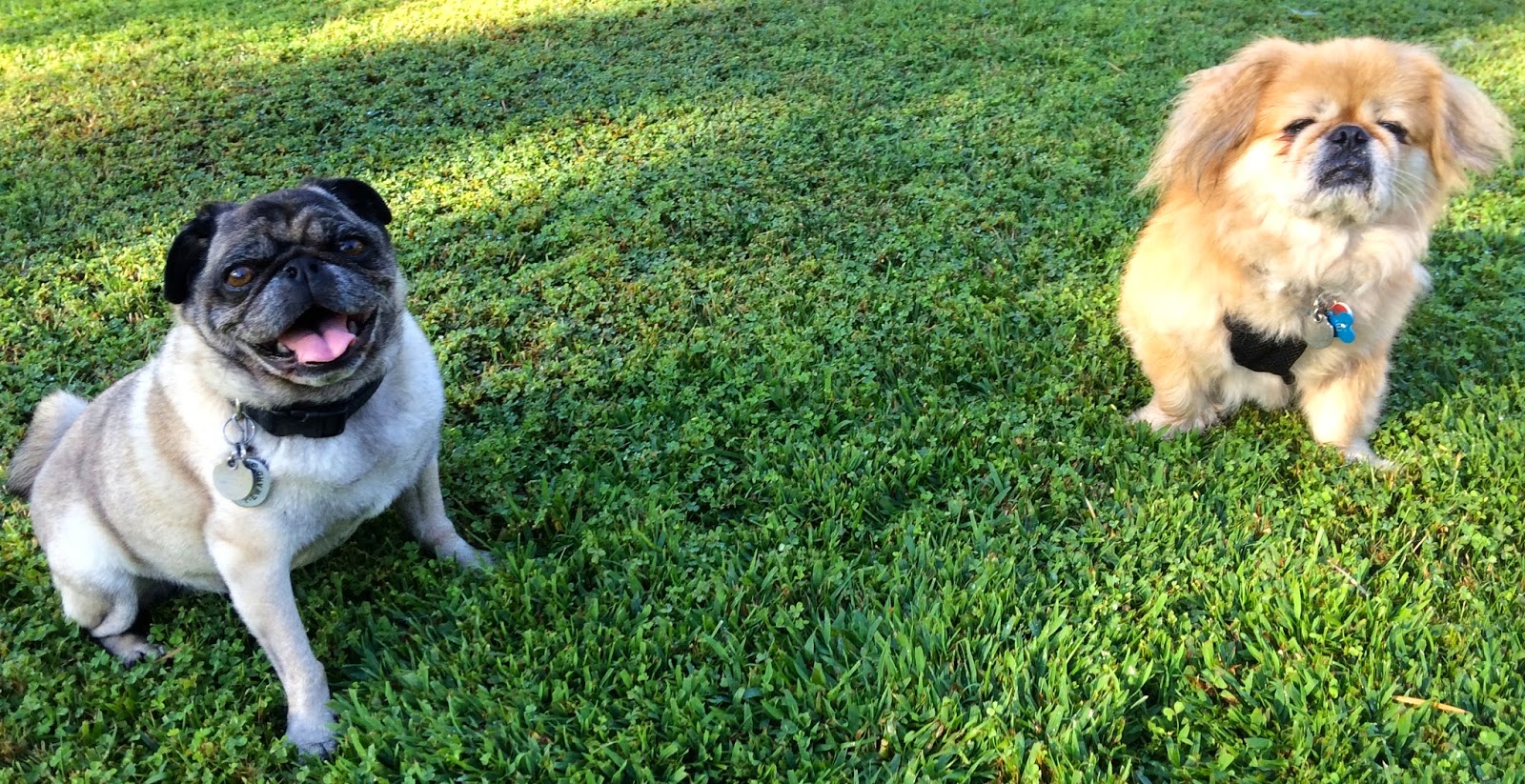 Disapproving doggy face on that Peke, for sure! Next up, Peke's all-white big sister, who has the most beautiful icy-blue eyes: 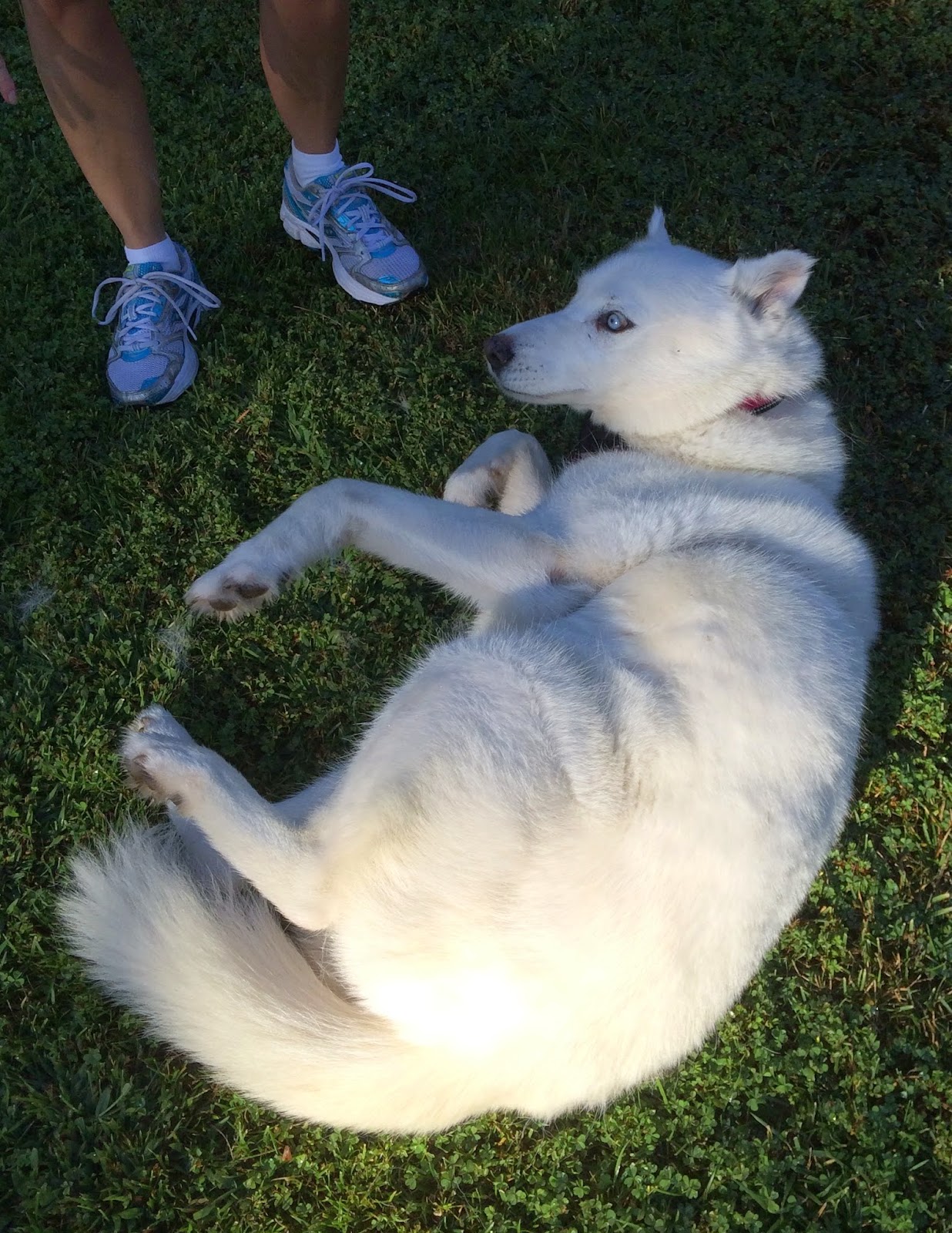 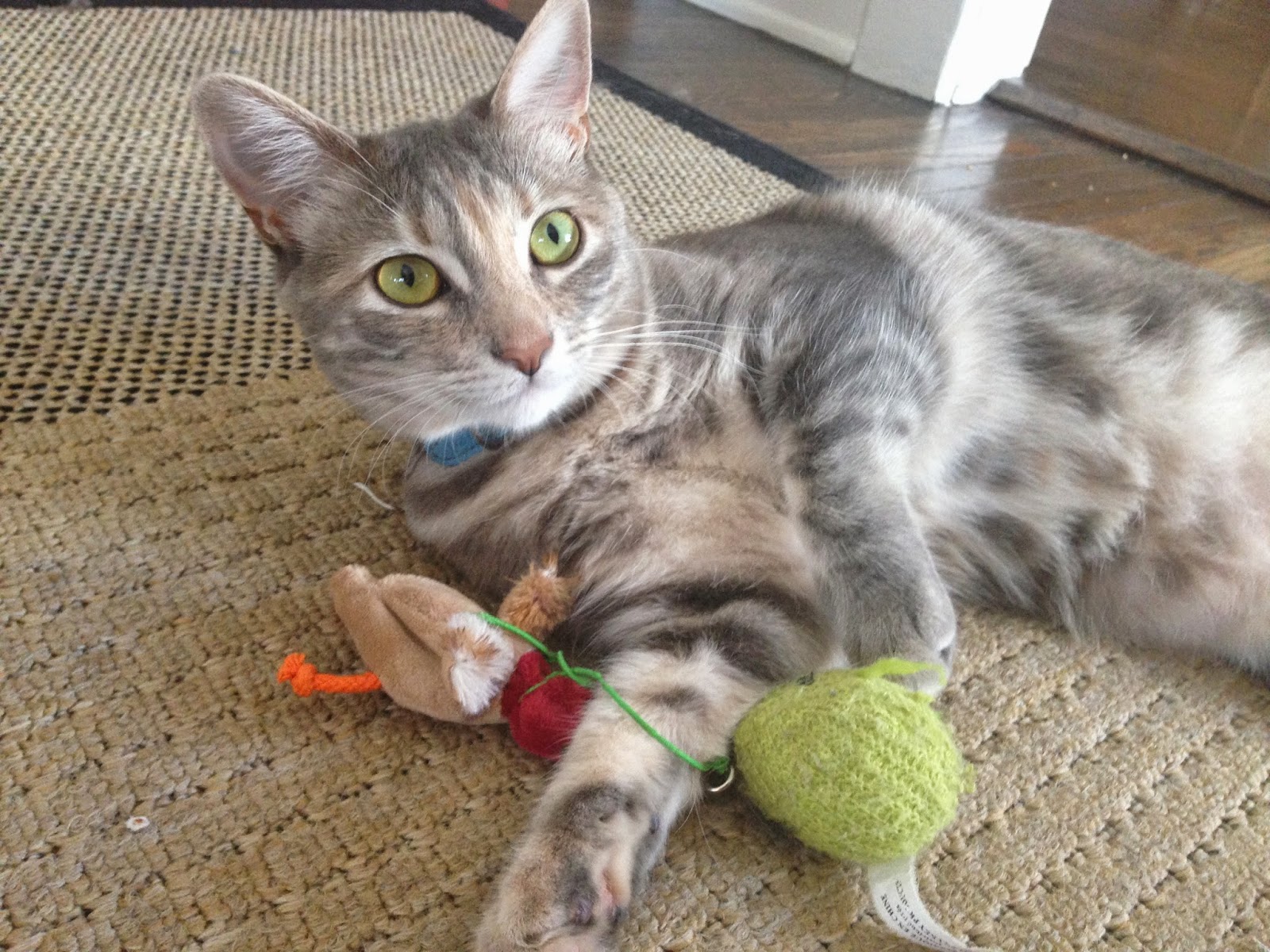 (Sharp-eyed readers will notice I posted this photo of the kitty before. Yeah, I did. She's still cute. So there.)

Next, Pao Pao doing some sort of weird Sitting Buddha imitation on the back of the family room sofa: 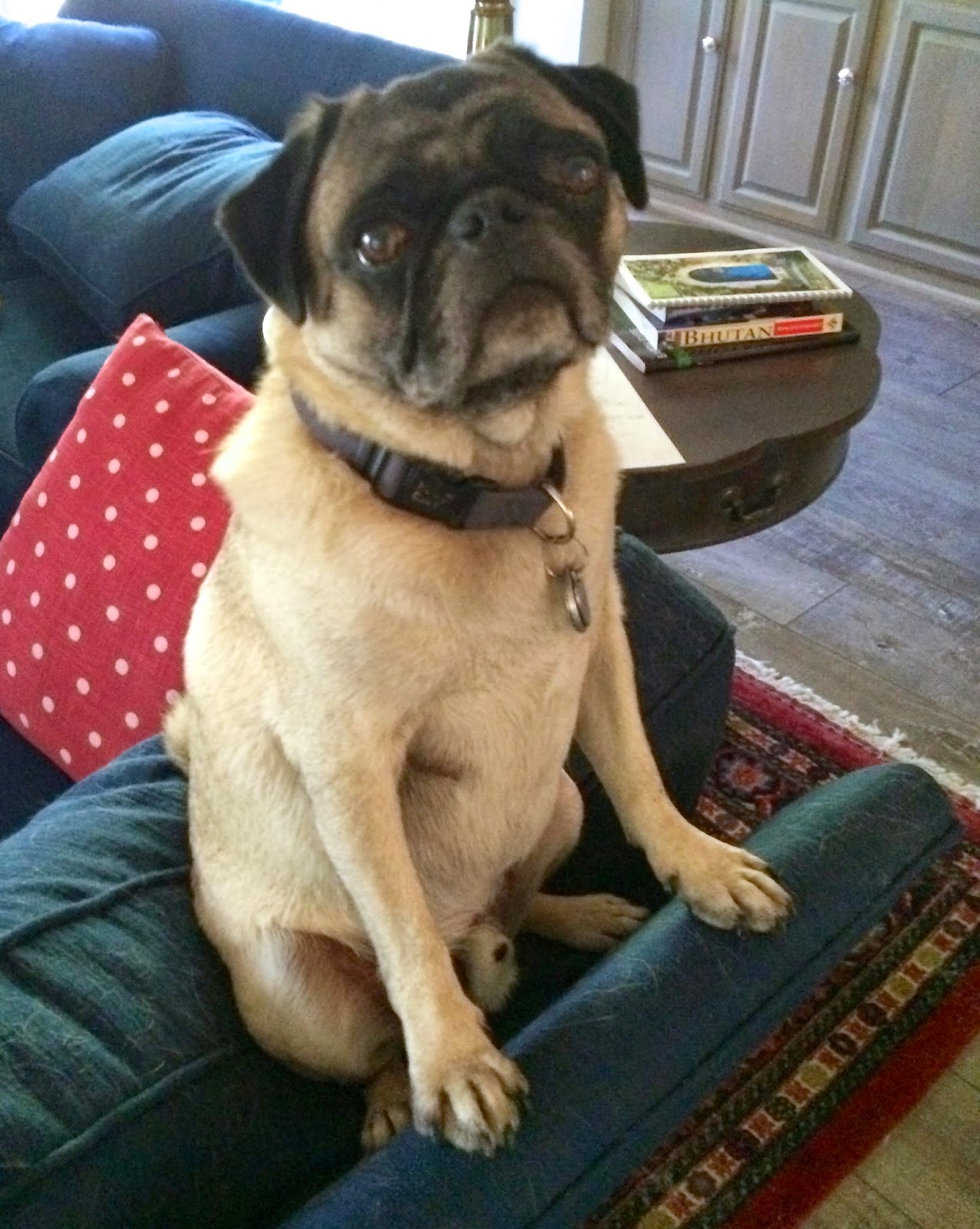 An adorable little-girl terrier that I noticed, running in terror through my neighborhood's streets. I was in the right place at the right time--in my car, with treats, extra leash, water, and a bowl--and so I was able to follow her until she stopped in exhaustion and let me slip a leash on her and pop her into my car.

She was microchipped--Yay!--so she's reunited with the lady whose info was on the chip--Double Yay!! 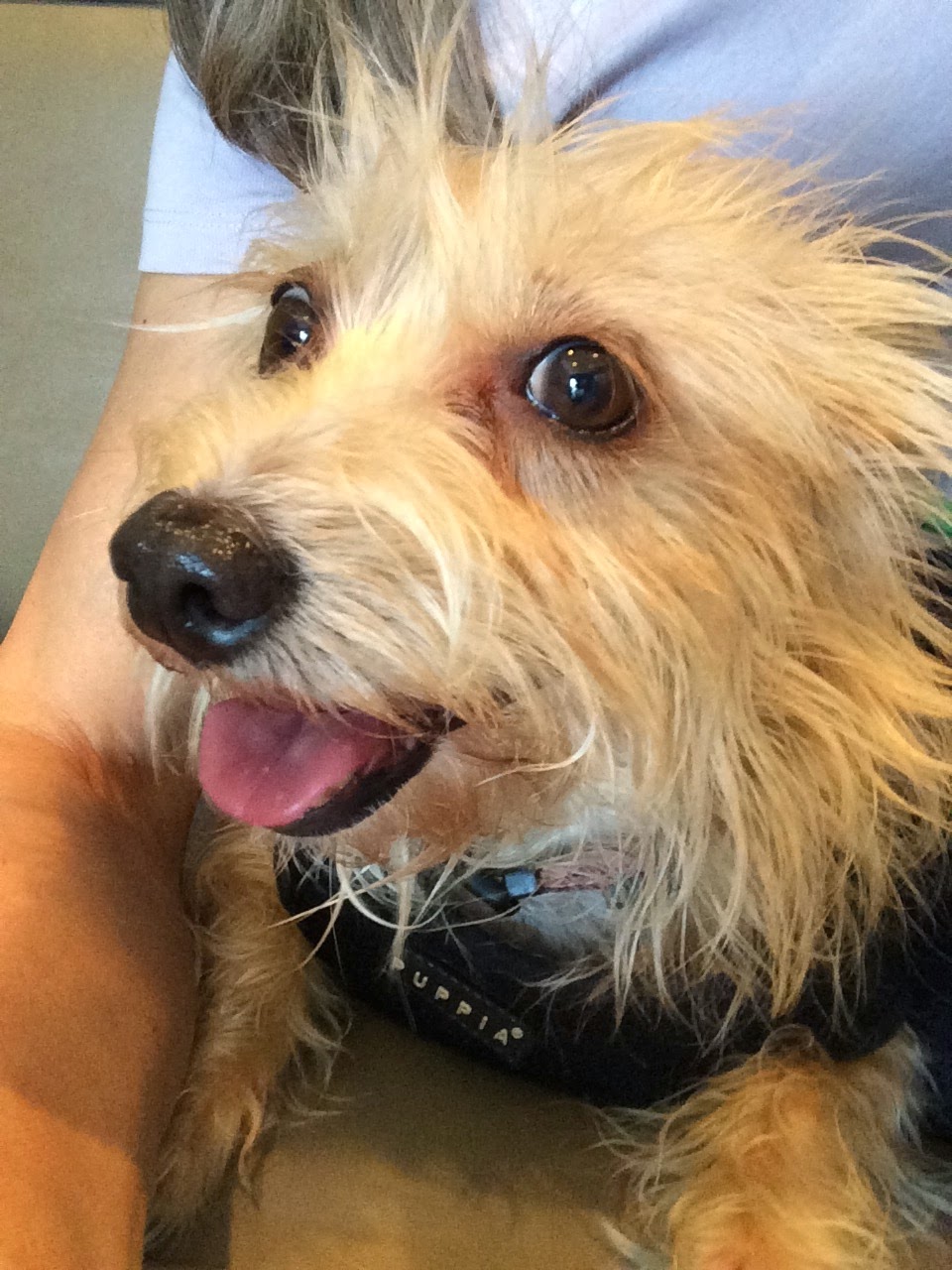 My friend's King Charles Cavalier, enjoying a car ride while vacationing with his family on the East Coast: 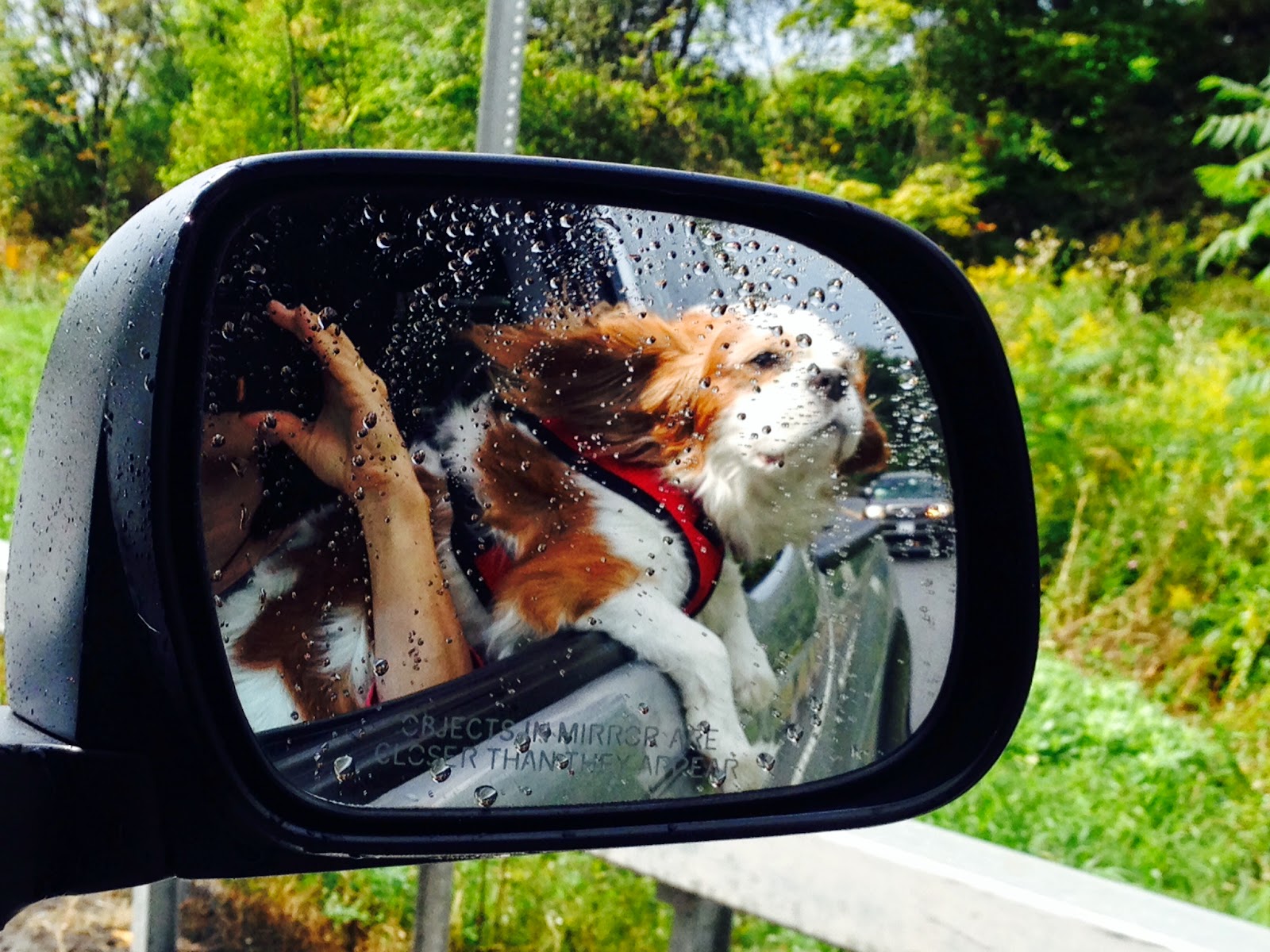 Pao being super-silly with his crushed spiky rubber ball that makes him look like he's got a mouthful of bad teeth: 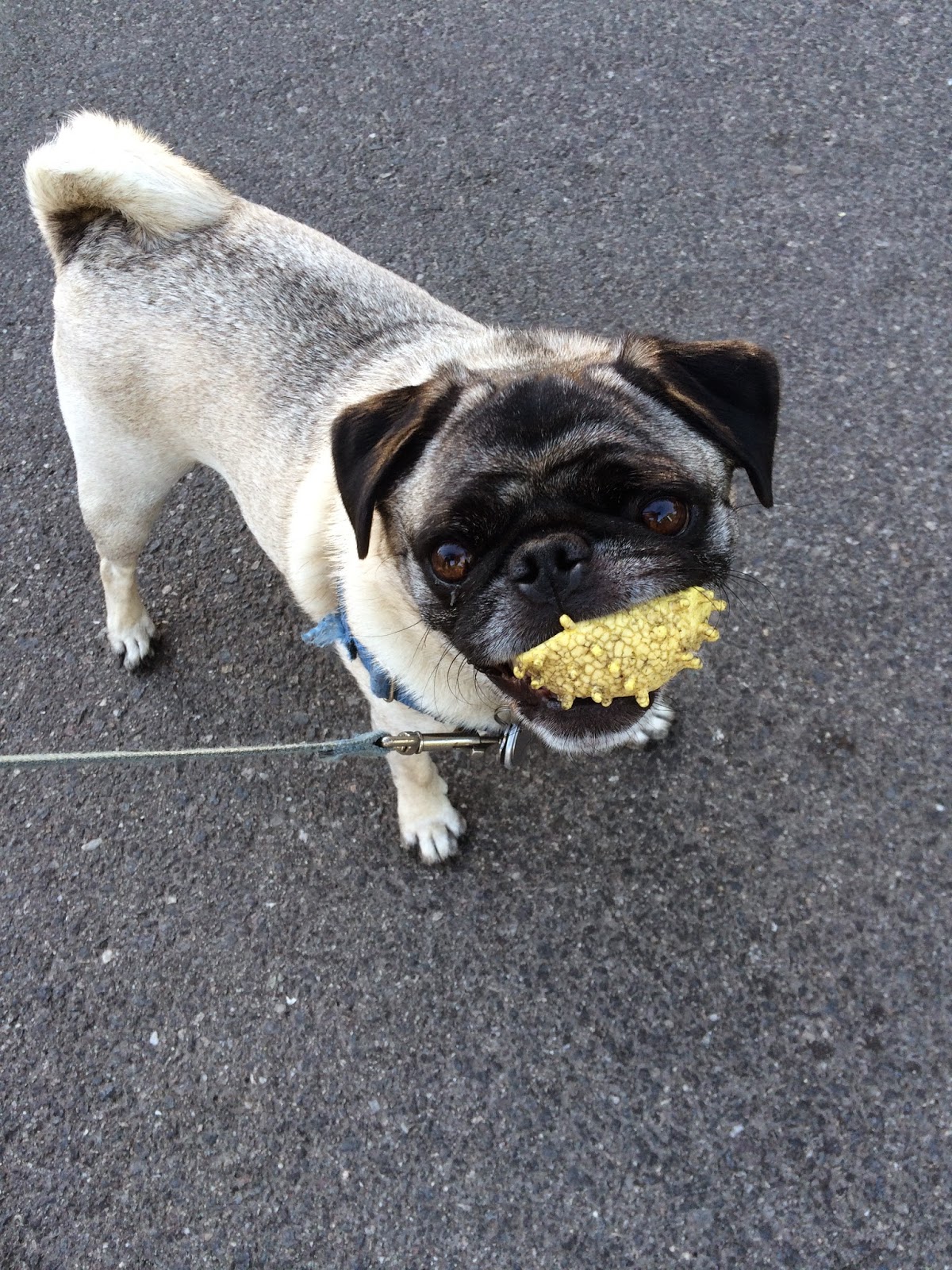 A Black-and-White Jumping Spider I spied near my roses today: 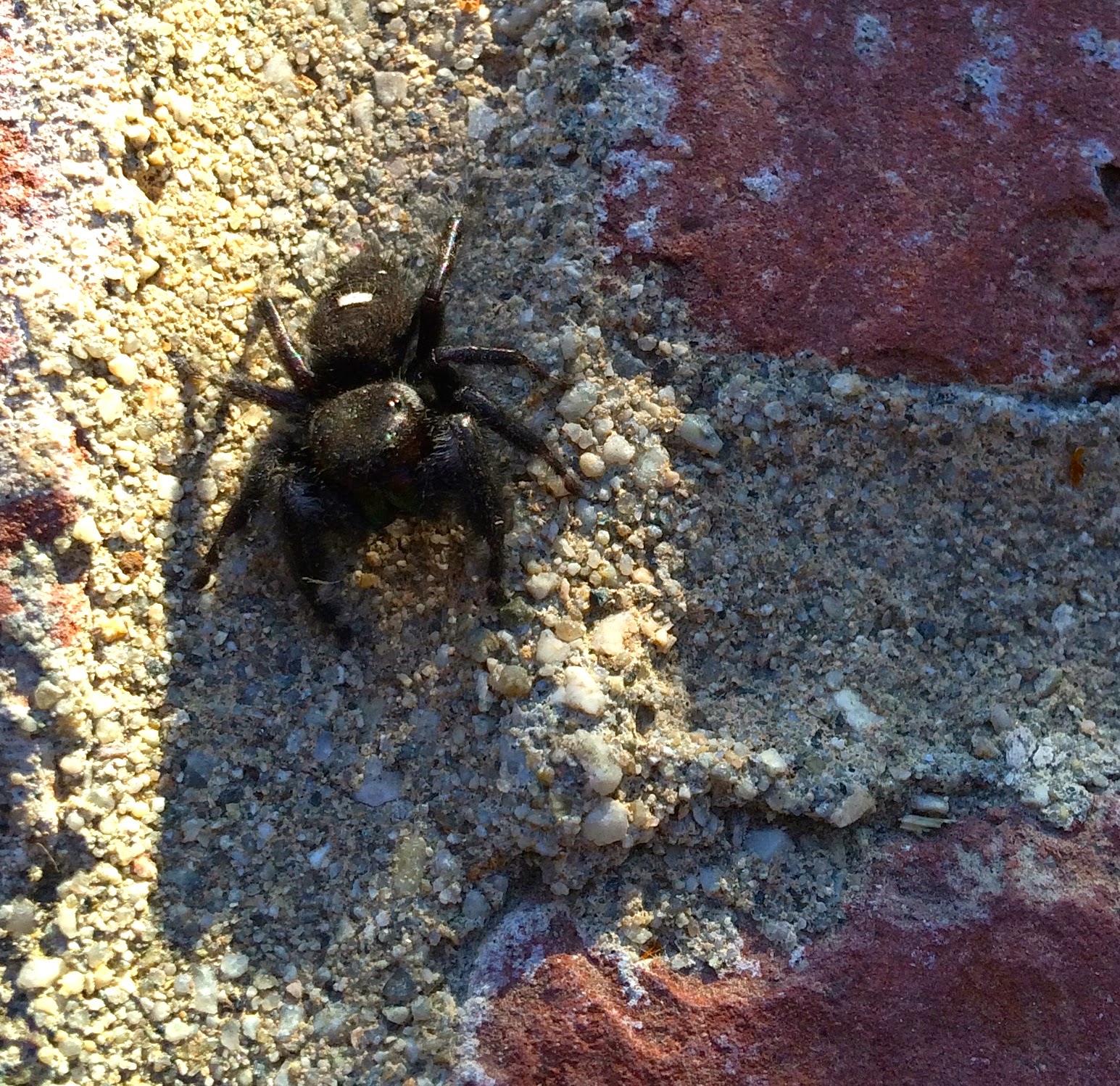 These harmless bits of velvet are beneficial critters, helping to control the bug population in a garden. As a gardener, I appreciate that. And on her top side, she has a smiley face with "eyelashes" on the "eyes": 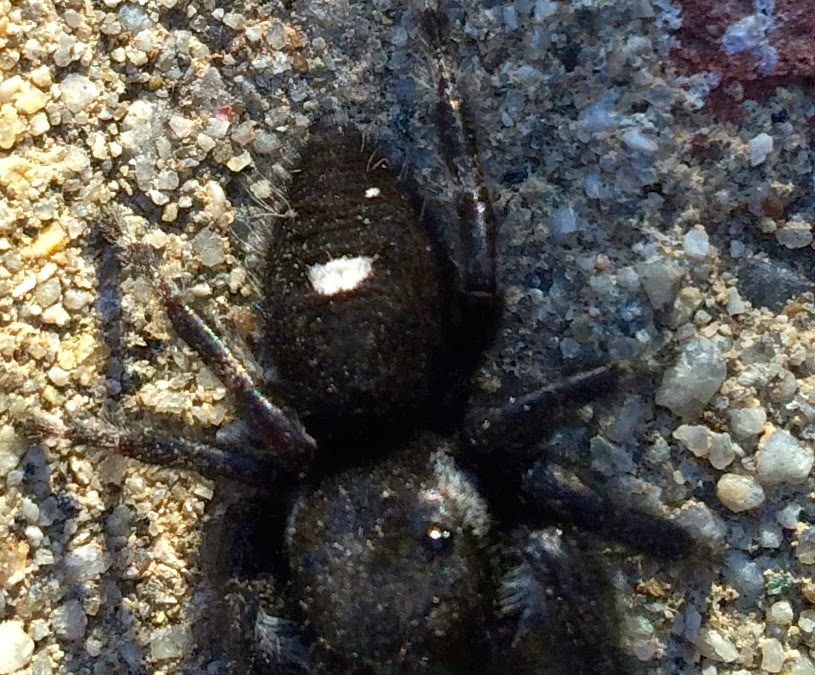 Gaa! How cute is that?

She was running like the dickens to get away from me, but I caught a flash of her green...uh, eyes? pincers? I don't know what they were, but they were a beautiful emerald color, and you can see them in the photo below: 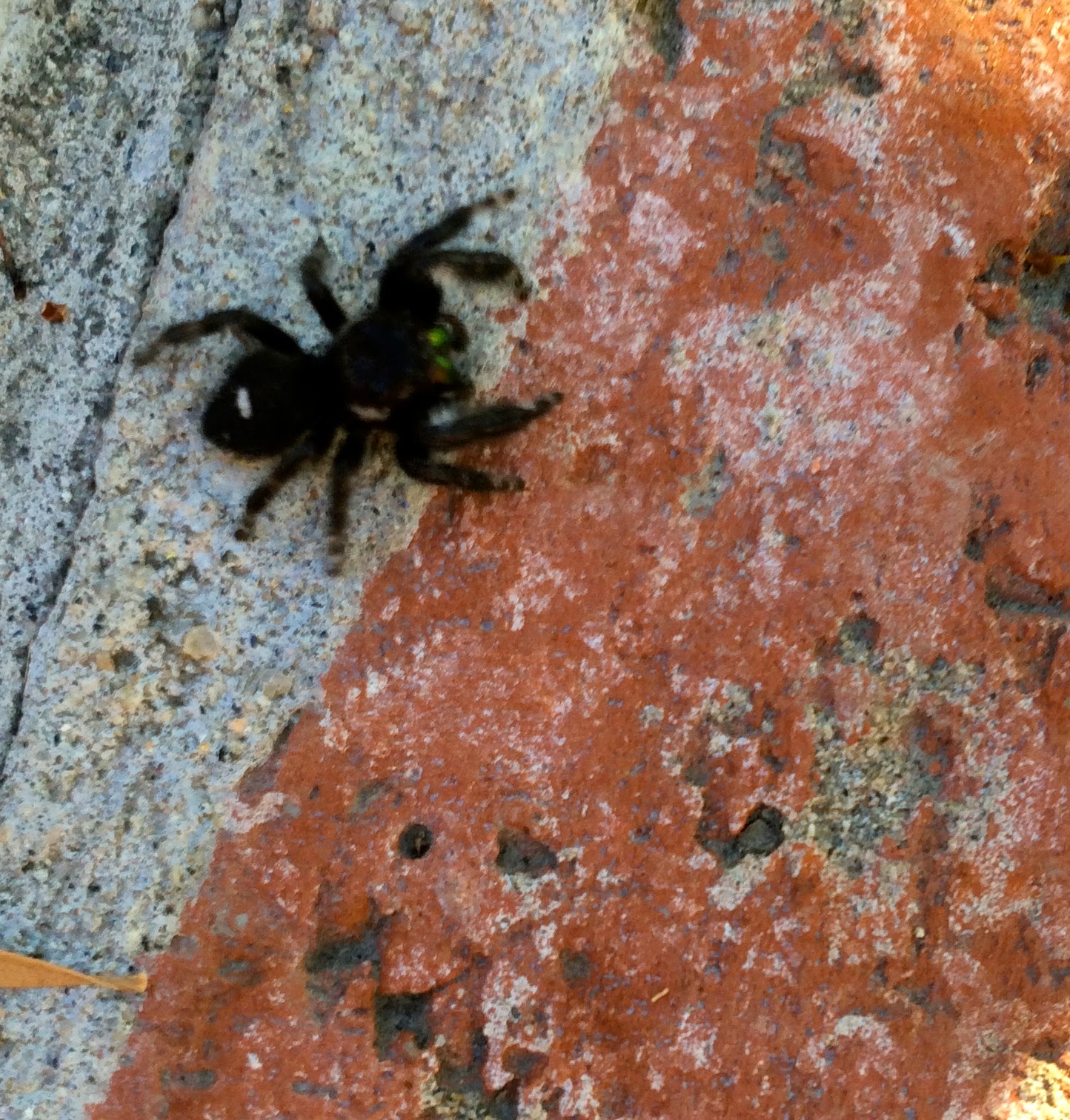 And last--but never least, in my heart--the rather hapless Mu Shu, who snuffled around in a sticky spider web and emerged with a blade of grass completely stuck to his muzzlepouche: 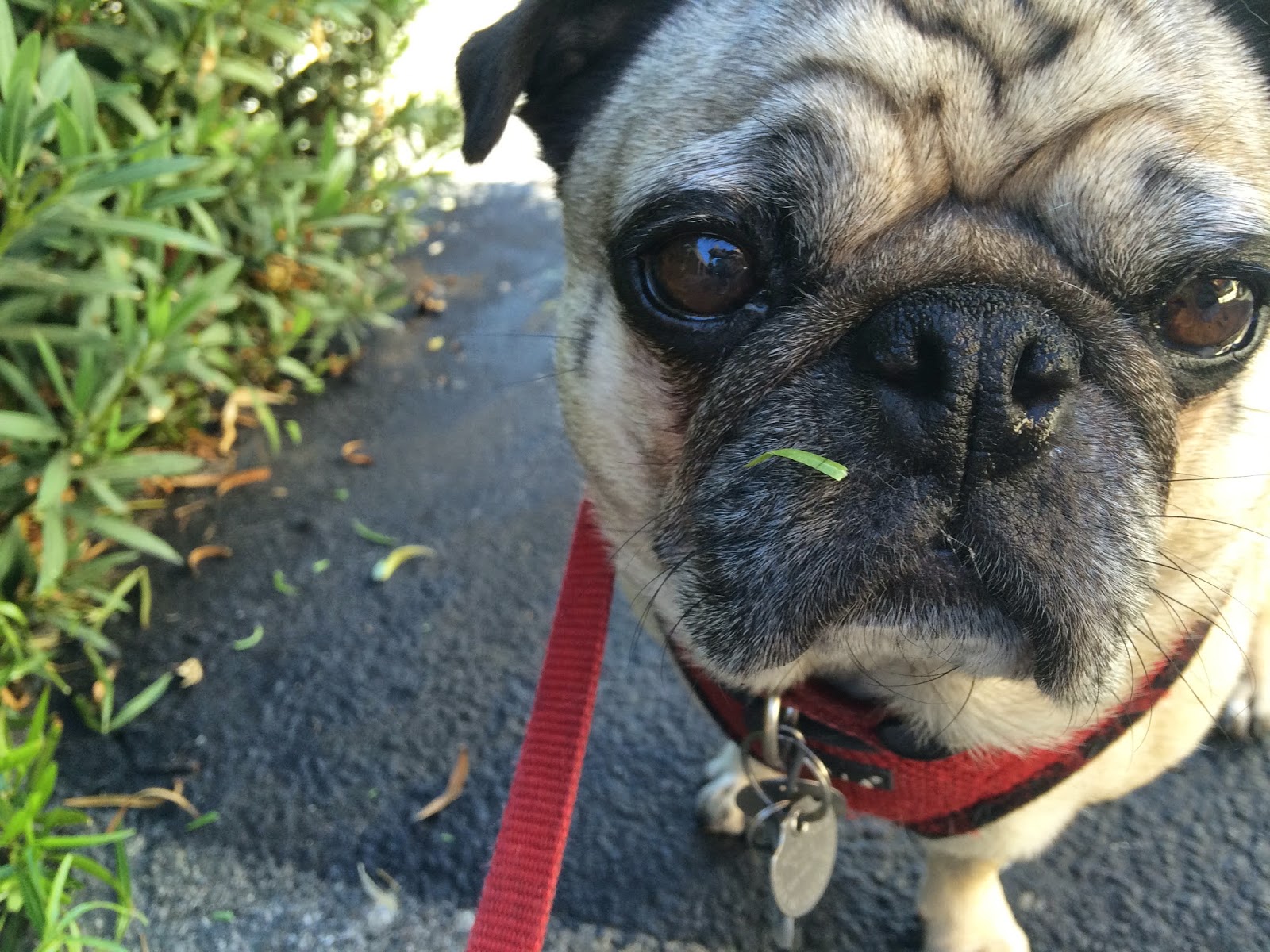 Ah, the Mu Shu. What would I do without you?

Have a great day, my friends.