We adopted our first pug, Won Ton, years ago, from a pug rescue group. We jumped through hoops to please the ladies that ran the group. We put in a lot of "face time" at their rescue events, submitted to a home inspection, filled out endless forms, put up a chunk of money, and dutifully attended "Pug Owner" classes before we were handed our new little guy. 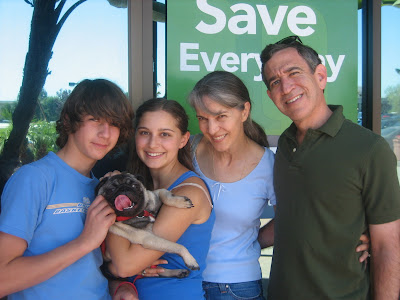 The Boy, Won Ton, Lovely Daughter #1, Yours Truly, and The Hubby the day of the adoption.

Before we adopted him, we signed papers acknowledging that, should we ever not want him any more, we could not sell him or give him away to anybody. He still belonged to them, technically, and could only be given back to them. Likewise, we were told his microchip listed the rescue group as his legal owner.

We submitted to all this folderol, paid the expensive adoption fee, and were awarded our darling dude. 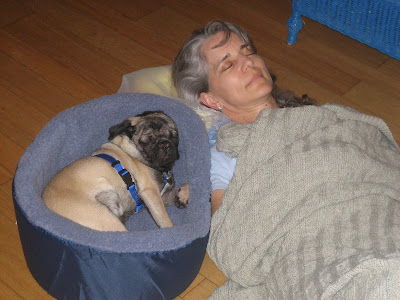 Won Ton and Moi, exhausted at the end of Dog Ownership Day #1.

Then, last year, the pug rescue group folded. I realized I should update his microchip info so that it now shows us as his legal owners, since the group has shuttered its doors. But I couldn't find any info about his microchip in his adoption papers. No matter, I thought; I'll just ask the vet to scan him so I have the ID number at my fingertips when I contact the microchip company.

So today WT and I went to our lovely, local veterinarian clinic. The vet tech ran her scanning wand all over WT's neck and shoulders, and then down his legs and around his chest just for good measure.

Then she broke out the big guns, the "universal" microchip wand. Still no chip!

Once more, she tried, using the "this works in every country around the world" microchip reader. No chip!

Those silly biddies at the pug rescue group never chipped my little snuffler at all! 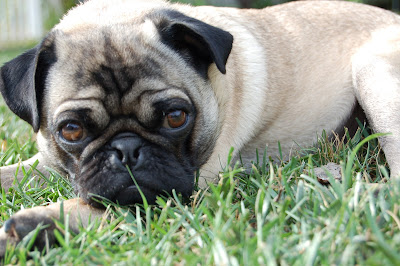 Won Ton, about 1-1/2 years old here, went "chipless" for more than five years, without our knowing it.

The implications of the situation almost made me fall off the faux-leather bench in the vet's waiting room: If WT had ever slipped out of the house (which he loves to do) without his tags on, he'd be lost to us! Pugs love everybody. Won Ton would follow home an axe murderer, without a backward glance at our loving family. And he comes to any name you call him--as long as you're holding a treat in your hand! 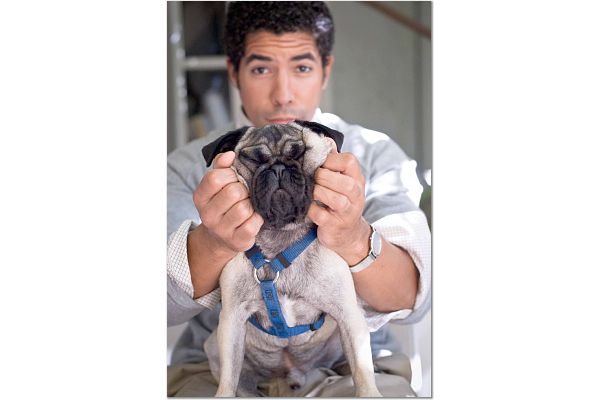 WT  mugs with an actor on break from an" indie" movie shot at our home.

Before we adopted him, he lived in a crack house with a drug dealer and a pit bull. He gets along with everybody, human, canine, or feline. No nice citizen would ever suspect he was "dognapped" if he slipped out our doors to land in the arms of another family. 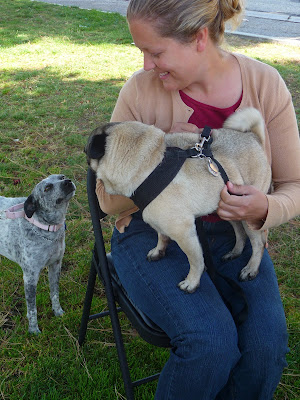 Won Ton and his dogsitter, Bethany, at our farmers' market, with one of his dog pals.

It took only a minute for the vet to insert the rice-sized microchip under his skin at the back of the neck. 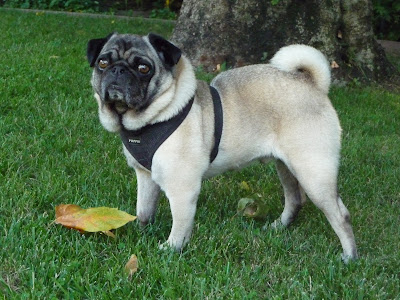 I get chills when I think of how wrong this could have gone, pre-microchipping today. His younger brothers look up to him so, what would they do without him? 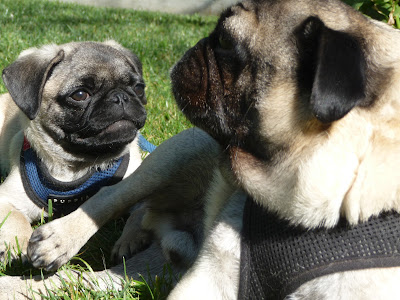 Pao Pao as a baby, and Won Ton.

Heck, what would WE do without him? 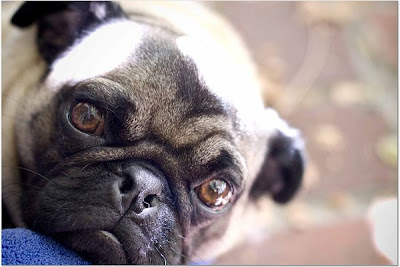 I hope the microchipping ensures we never have to find out.