Last week, very early in the morning, I saw the most beautiful green beetle resting in my pink roses. In the soft light, the vivid emerald of the beetle and the tender, pale pink of the rose just took my breath away.

Part of me wanted to hurry indoors to grab my camera. But I sensed that, if I did, the critter would be gone when I returned. So I stood still and imprinted the image on the "Kodak paper in my mind," as a friend used to say.

It was a fleeting few seconds, but the beauty of that moment stayed with me all week long.

Well, sometimes Providence gives us a second shot: Today in my garden, there was the same type of beetle, again in a pink rose. 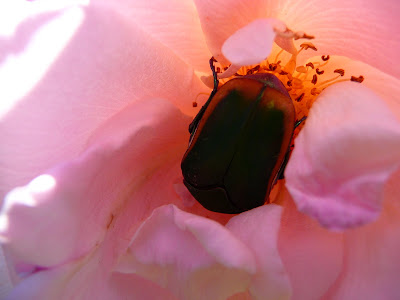 This time I hazarded the chance. I ran inside, then out again to snap two fast photos before the green beauty lifted off and flew away with a deep, baritone buzz.

I thought it was a Japanese Beetle, but thanks to Google, I now know it's a Green Fruit Beetle, also called a Fig Eater Beetle, or just Fig Beetle. Its scientific name is cotinis mutabilis. Whatever it's called, it's gorgeous. 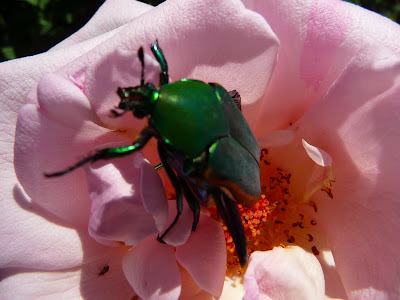 Whenever I see a beetle, I'm reminded of a scientist named J.B.S. Haldane. It is probably apocryphal, but the story goes that some theologians were talking to Haldane about how there are more insects than any other life form on Earth, and more beetles than any other kind of insect. What could be inferred about the the Almighty from these facts?, they wanted to know. "That the Creator," Haldane supposedly replied, has "an inordinate fondness for beetles."