Eating My Way Across England

The last time I was in England was 35 years ago. (Can it really have been that long ago?) I remember the pub food was pretty good, but the restaurant food was iffy. Salads were nonexistent, and ice in water was not to be had.

I'm happy to say that things are somewhat better there: Now they have salads sometimes!

We had some mediocre food in the U.K., but we had some awesome food as well.

Here's some of the food highlights (and lowlights) from my trip:

Indian food is everywhere--especially in the cities. It's reasonably priced and consistently well prepared. This was my dinner one night in Cambridge. I don't even pretend to remember what it was all called, but it was very tasty: 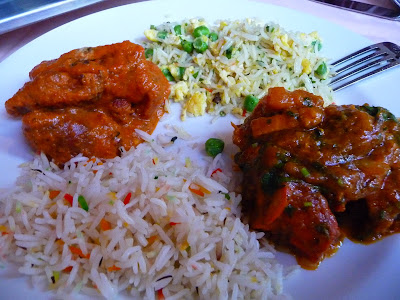 Pub food is one of the things that the British do very well. Steak-and-mushroom pies, fish-and-chips, a wonderful selection of cheeses and pickled vegetables called a "Ploughman's Lunch"--they get these right.

This was dinner for The Hubby and me the first night in London. I had to use a flash, so the photo makes the food look a bit garish, but it was all yummy: 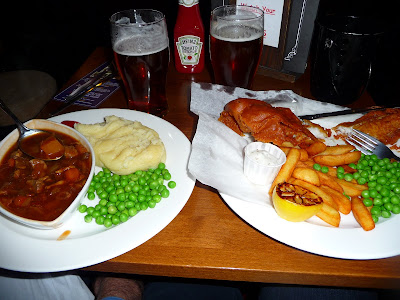 This is fish-and-chips with "mushy peas"--sounds awful, but they are quite good. The peas everywhere were fresh and not overcooked; much better than the canned stuff of 35 years ago: 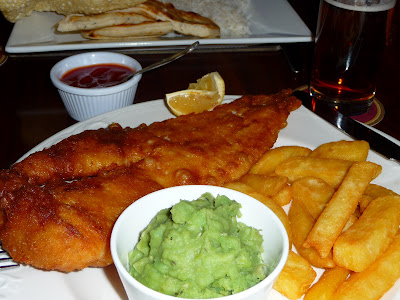 You can't talk about pub food without talking about beer. We had some terrific British beers. I couldn't finish a pint, however, as the alcoholic content can be quite a bit higher than what we have here in the States. In short order I discovered the "Shandy," which became my favorite pub drink. It's half ale, half carbonated lemonade. Wonderfully refreshing on a hot afternoon--and we did have hot afternoons! 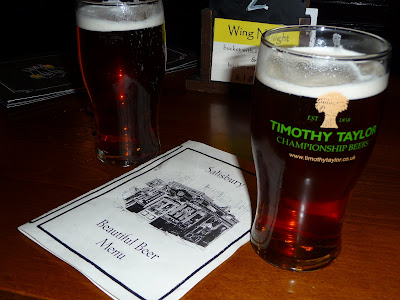 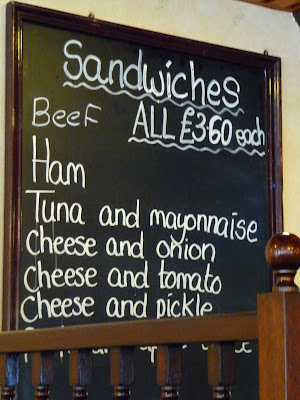 Whether in pubs or nice hotels, British sandwiches tend to have no crusts, and they are just a slice of meat between two slices of buttered bread. No garnishes, no lettuce, no nothing: 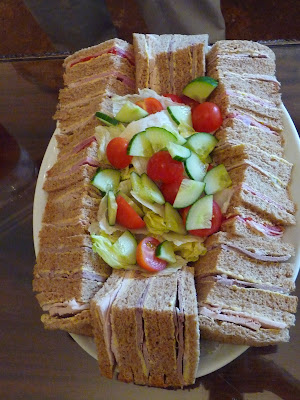 The best sandwich I ate was this cleverly packaged one I bought at a train station. It had lettuce and tomatoes and was, all things considered, quite tasty: 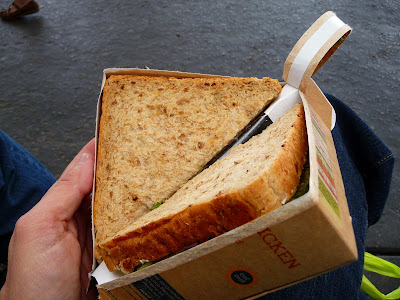 Now, pasties (rhymes with "nasties") are another story. Every city had a chain of pasty shops, every little hamlet or burg sold pasties in its pub, and they were consistently delicious. A pasty is a turnover, usually filled with savory meats and vegetables. We ate spicy chicken pasties, lamb-and-potato pasties, curried vegetarian pasties. You name it, somebody makes a pasty of it.

These shots are from Presto Pasty in Cambridge, one of Lovely Daughter #2's favorite haunts (and now one of mine): 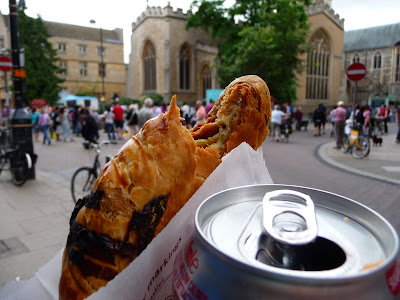 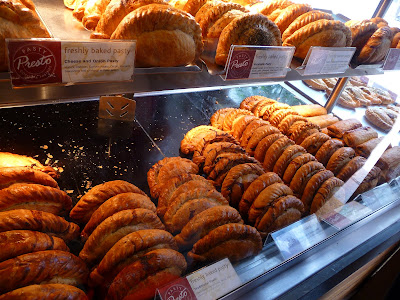 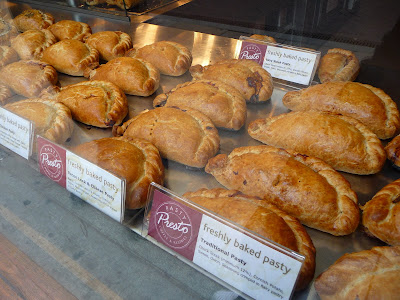 After London and Cambridge, The Hubby and I spent a week hiking the Lakes District with a group of like-minded walkers from the States. As a group, we ate pub food and sack lunches during the day. At night, we went out to glorious dinners at top-drawer restaurants.

It was a little bit of everything.

On the trail, we ate quick, high-energy snacks. One day our guide pulled out a candy bar called "Kendal Mint Cake," beloved of British hikers and mountaineers. It's not much more than mint flavoring and sugar, so I suppose it delivers a lot of energy for not much weight. 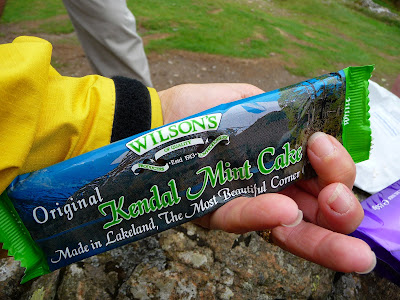 The mint cake on the left is made with white sugar; the one on the right with brown sugar: 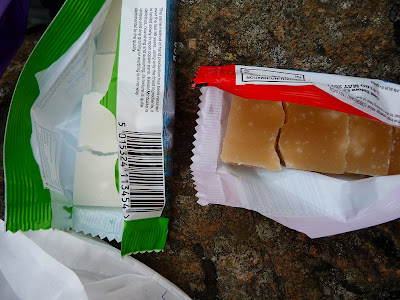 Sarah Nelson's gingerbread (below) is very famous in the Lakes District. The cookie resembles a three-layer graham cracker. In the middle is a chewy, very ginger-y layer, and on the outsides it's like a very fine crumbly layer. 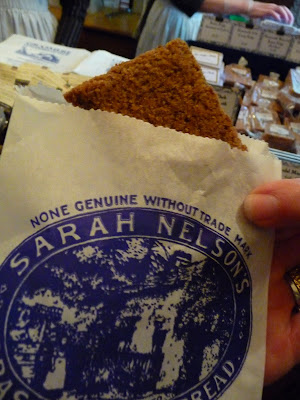 The gingerbread cookies popped up one day when our guide took them out of his bottomless pack: 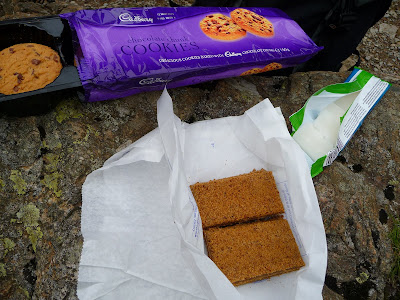 It's a good thing we were hiking mountains during the day; at night we tended to put all those burnt-off calories back on. We ate ourselves into a blissful stupor at some of the country's finest establishments. 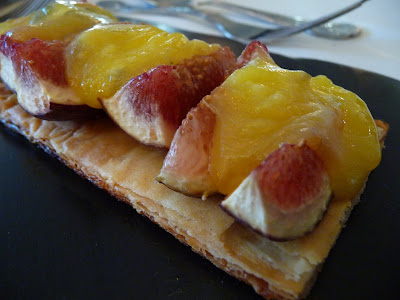 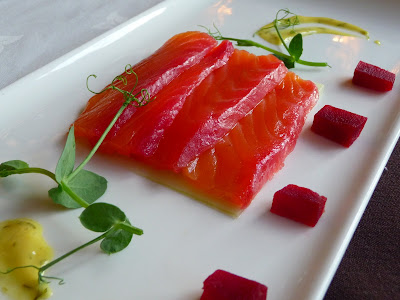 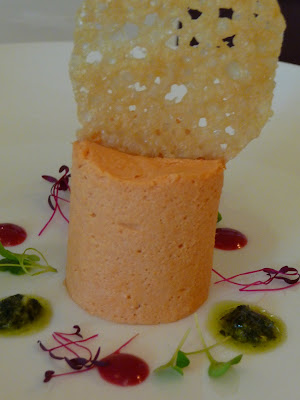 and a hot Vichyssoise: 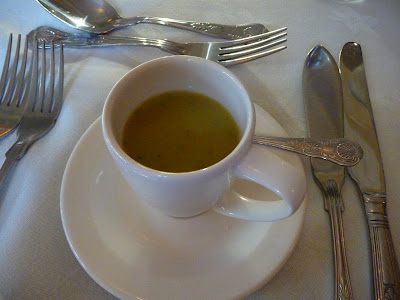 We had entrees like pasta with sunflower seeds, cheese, and dill: 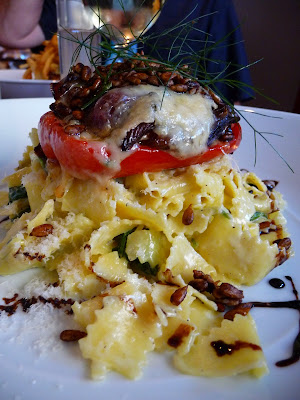 Medallions of lamb on a bed of vegetables and gratineed potatoes: 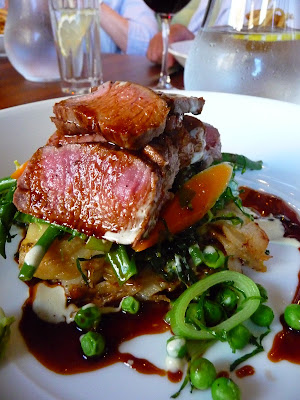 salmon and ribbons of zucchini in a fantastic Balsamic reduction: 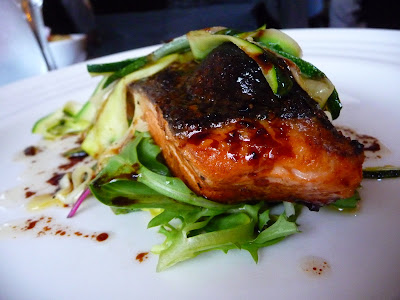 and cod cheeks with risotto: 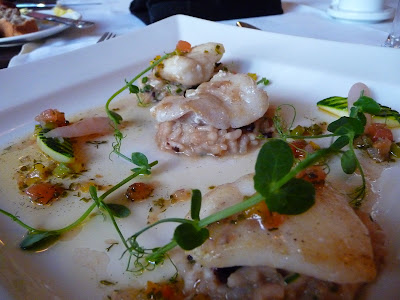 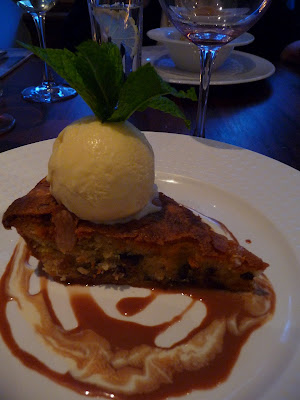 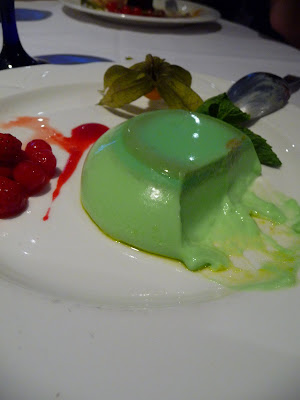 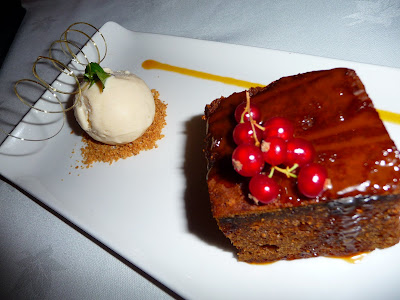 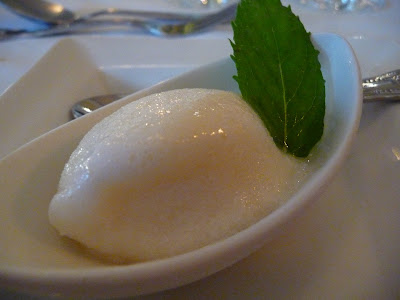 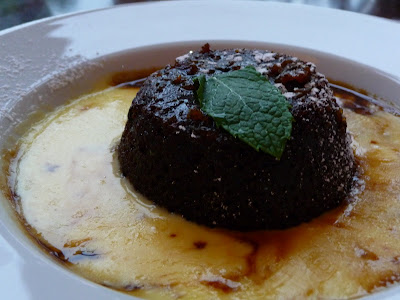 And a heavenly confection called Lemon Eton Mess, which tasted like the insides of the best lemon meringue pie ever, studded with chunks of crunchy, broken-up meringue: 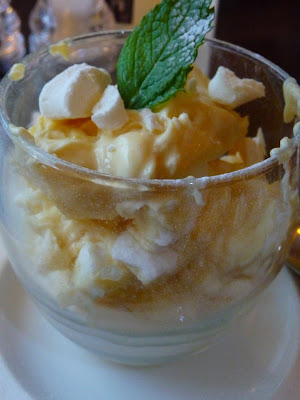 The service at these top eateries was lovely, and so were the table settings: 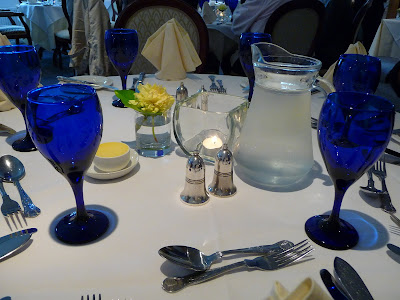 Although, in truth, this is my favorite setting for eating: 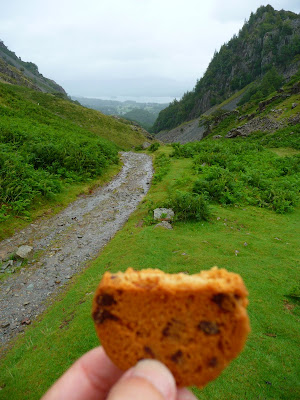 Anything tastes better when eaten out here!
Posted by Juli at 3:40 AM