My city is so big, it has six gigantic animal shelters. All six are bursting at the seams from overcrowding. Every year, these shelters take in thousands of unwanted dogs and cats, and hundreds of rabbits, turtles, chickens, reptiles, and birds. They're not allowed not to. By law, the city MUST accept every animal the public brings to its shelters. And the task of finding all these animals a new, good home is overwhelming.

It's traumatizing, to the workers and to the pets. But we try, anyhow.

Every time an animal is turned in, the shelter produces an information sheet for the animal and takes a quick snapshot. You can practically see the fear and sadness in these "mug shots": 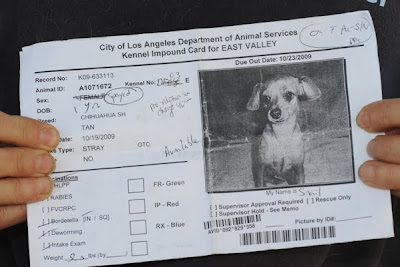 The ears are down, the eyes are worried. They look shell-shocked: 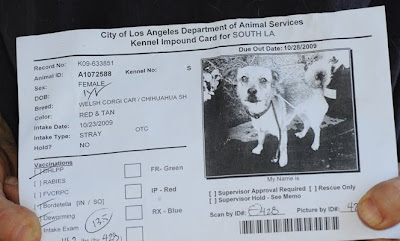 The depression and confusion just radiates out of these images: 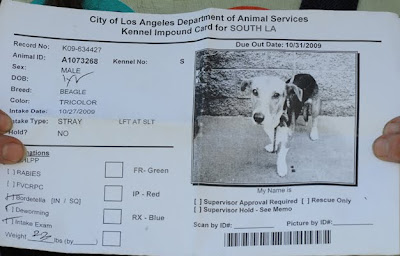 It's a nightmare for these guys! 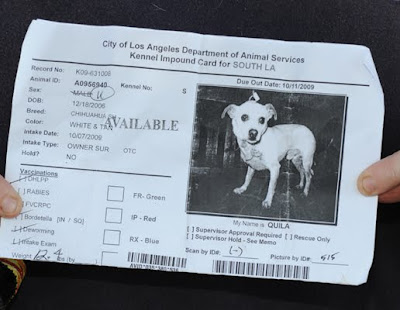 But sometimes the critters catch a little break.

Once every two weeks, the shelters load up their best dog and cat prospects and truck them off to a nice day at the park. There, volunteers and shelter workers meet the public, show off the dogs and cats, and try to find them loving families.

The lucky ones find a new home. The not-so-lucky ones at least have a day of fresh air and sunshine, all they can eat, lots of love and attention, and sometimes even a bath and a professional portrait-sitting!

This is Quila, the same little dog in the photo directly above: 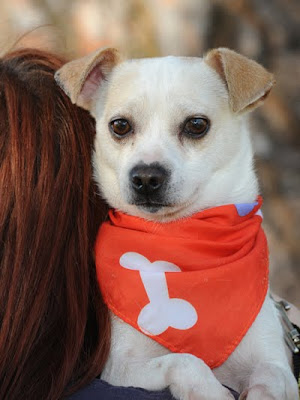 She looks a bit better, doesn't she?

All these darling photos are courtesy of Karl Loveys, a wonderfully talented photographer who takes portraits of the shelter pets--on his own dime, volunteering his time. These great images are electronically sent to the shelters, where the office workers replace the horrible intake images with his far-more-appealing shots. (Thank you, Karl!)

This handsome boy is Tevin, a German Shepherd mix, 2-1/2 years old, found as a stray: 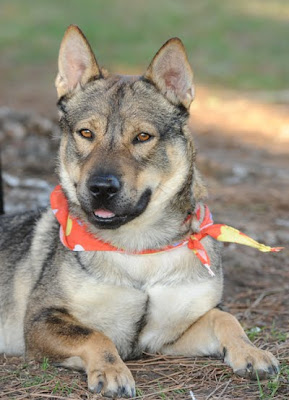 This little dude below had no name, but he was a dead ringer for Toto from "The Wizard of Oz," so that's what I named him! (One fun perk of volunteering for the pound is that we can name any nameless pets.) The right name really helps a dog or cat get adopted. So, here's Toto: 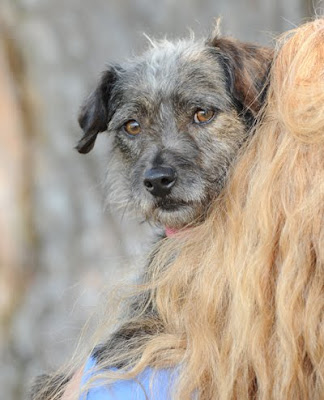 This dude below is Tyrone. I had the pleasure of his company for six hours last Sunday, and he is a pistol! Funny and confident and totally certain the entire world is in love with him: 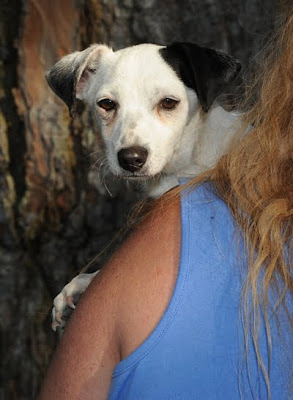 I'm in love with you, for sure, Tyrone!

Sometimes dogs are surrendered by their owners, in which case we keep their name. It's confusing enough, coming to the pound; they don't deserve to lose their name along with their home.

But...they're not always great names. This adorable thing came to us with the unfortunate name of "Vader." Really, people? Nothing this perky deserves such a dark and forbidding name: 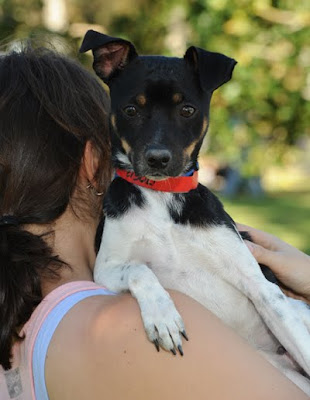 Here's a delightful little lassie, a poodle mix, who was picked up as a stray, so therefore had no name. I didn't know she was nameless. I'd call her "Maybelleine"--I mean, look at those eyes! Somebody is using eye-liner--and lip-liner, too, I believe: 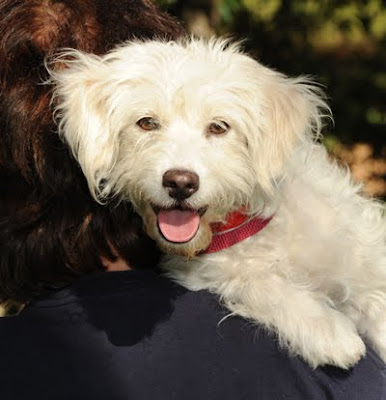 When a stray enters the pound, the workers at the front desk do their best to guess the breed or mix of breeds. But they're working furiously to keep up with the steady flow of visitors and incoming critters, and occasionally they guess wrong. This cutie-pie, for instance, was marked down as a Welsh Corgi mix: 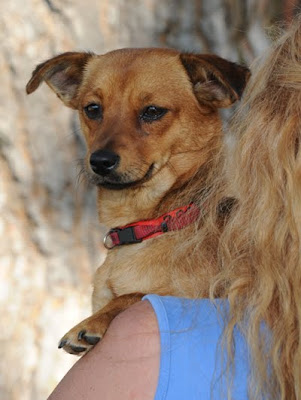 Umm, no, folks. She's one year old, which means she's fully grown, and she weighs just 13 pounds. There's nothing remotely Corgi about her. More of a Chihuahua mix, I'd say.

Like "Phoebe," a perfectly adorable Chihuahua/Italian Greyhound mix. Phoebe was surrendered by her owner, and she must've been spoiled rotten. If I bent down, she was instantly in my lap. If I stood up, she tried to jump up to my waist. If I paid attention to any other dog, she growled as if she owned me. Miss Phoebe clearly is used to a lot of affection and is on a one-woman campaign to restore herself to her rightful place, at The Center of the Universe: 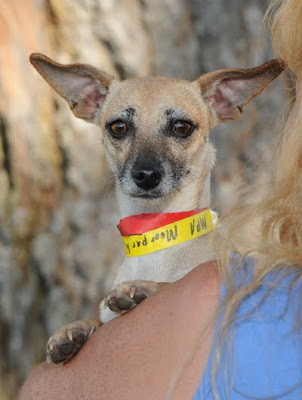 This winsome little one-year-old girl, below, is a Labrador/Pit mix. She also was an owner surrender, but the person didn't even bother to give her a name. Makes you wonder, doesn't it? Sweet as honey, and somebody didn't think she deserved a name, much less a home.

I beg to differ, Honey: 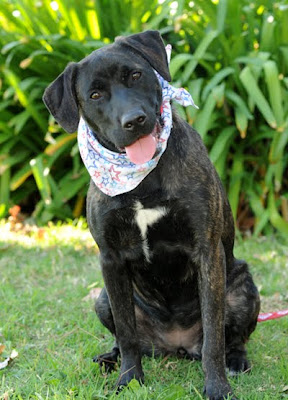 This 18-month-old German Shepherd mix came in with the name "Milla." On her info sheet, somebody has crossed out that rather unusual name and written, "Jennifer." Umm, probably an improvement. Now, if only her stylist had removed just one of the three things circling her neck before Jennifer had her picture taken: 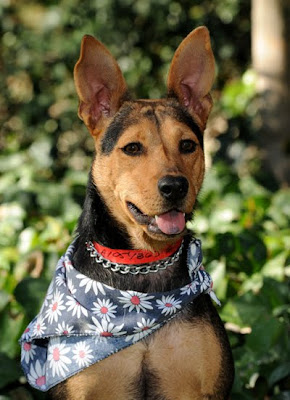 Restraint, Jennifer! The fashion mags always say, To avoid over-accessorizing, take one thing off before going outside. Oh, well. 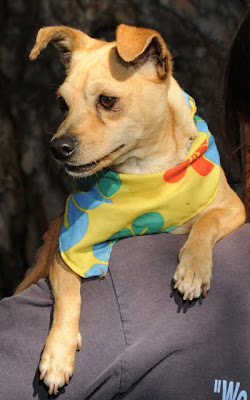 Okay, so somebody was very tired or at the end of their shift. Ain't no way anything as big as a Shepherd got into this petite pal's gene pool.

I'd say, When in doubt, just write "Chihuahua mix" on the card, folks. About half of all the dogs we get seem to fall in that category.

But not Gus Gus, an Akita/German Shepherd mix. What a happy boy!: 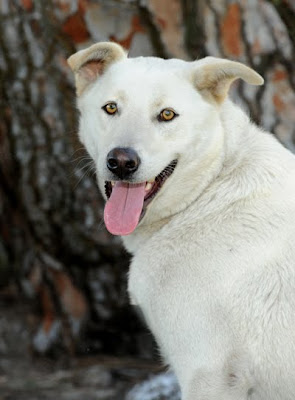 He's two years old, and unlike 90% of the cats and dogs we have in the system, he's already neutered. Yeah, it's been a law for more than a year now that in my city, you HAVE to neuter and spay your animals unless you're a legitimate breeder or they're show animals.

This is a great law, but unfortunately, it has no teeth. And so as a city, we are overrun with puppies and kittens and pregnant mommas and four-legged Lotharios running around making more babies. It breaks my heart. At least Gus Gus's owner got that part right. 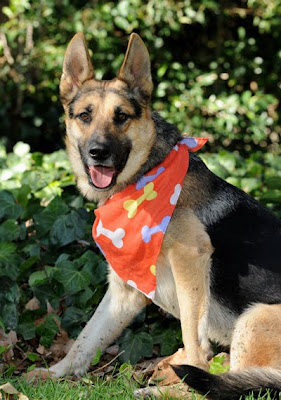 That's something I was surprised by when I started working at the pound. I thought all pound puppies were mutts. But there are plenty of purebreds, too.

The mutts have a special spot in my heart, though. How else can you get something as cute as this year-old Beagle/Terrier mix? I mean, wouldja look at those EARS? I could just eat them up: 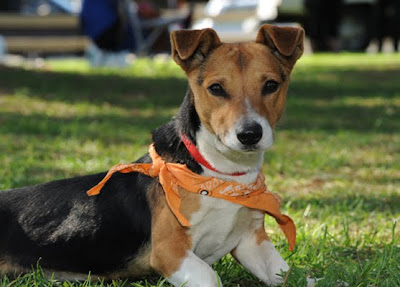 More misconceptions I had when I began volunteering: I thought Chihuahuas were high-strung, constantly shaking little bags of neuroses. And I thought Pit Bulls were scary, unreliable, and thoroughly dangerous dogs. Wrong, and wrong again! Yes, some Chihuahuas are nervous. But others are delightfully chill, laid-back dudes and dudettes.

And yes, some Pits are abused and misused, making them treacherous dogs. But there are also sweet, adorable "Pitties" out there. They act like big lap dogs--it blows my mind how sweet they are! Like Chata, a three-year-old Pit mix girl surrendered by her owner. She comes spayed and microchipped (which makes her a bargain!), and she is thoroughly adorable: 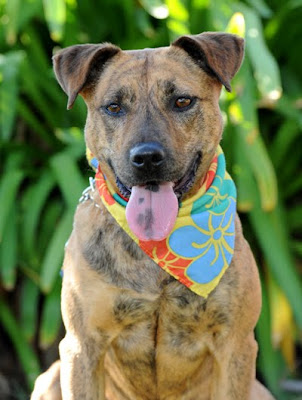 Like many big cities across the country, our pound has a city-wide website that people can search for potential pets. You can slice-and-dice your search, specifying what color, age, sex, and breed or breed mix you're looking for, and all the pets matching those parameters will pop up.

Type in "Cairn Terrier" or "white," and this little winner will show: 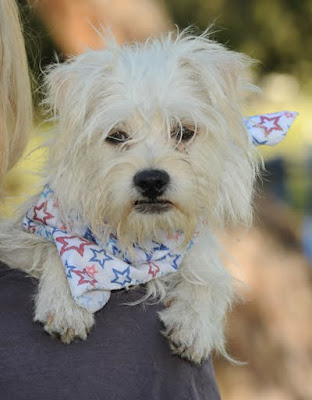 All across America, every day, there are dogs and cats and chickens and hamsters just looking for a good home. If you can, open your heart to one. The love that will walk in to your life will be immeasurable. 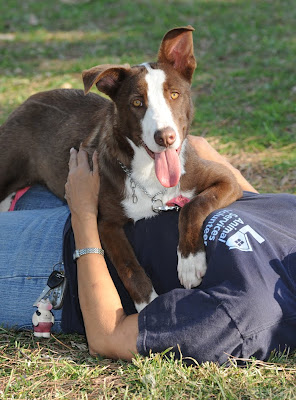 And if you can't adopt, please, urge your friends and relatives to spay and neuter their pets. Tell your legislators to pass laws with stiff consequences for those who don't. Think of the money we could save, as a nation, if we didn't have to shelter and feed and care for so many homeless animals.

The possibilities boggle the mind.
Posted by Juli at 10:00 AM