Art and People-Watching: The Broad Museum

Recently I visited L.A's newest museum, "The Broad." It was just completed, and it houses modern and contemporary art collected by Edythe and Eli Broad over the last half-century.

The Broad is an amazing-looking building. Here's "The Oculus," which looks like a giant thumb pushed into a part of the mesh-like outer surface of the building: 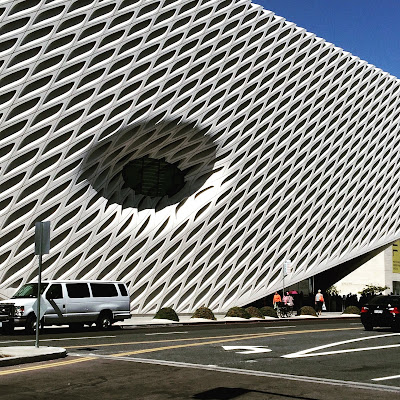 But what's inside is even more fun. I loved the balloon-like pieces by Jeff Koons: 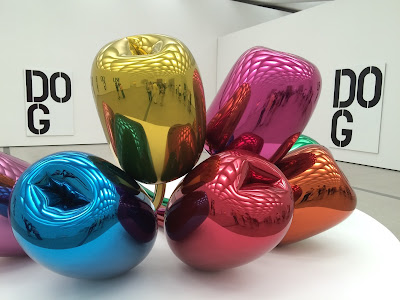 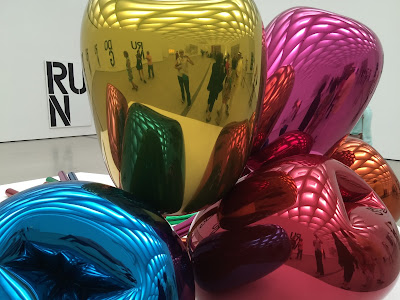 His "Balloon Dog" is a gigantic 12 feet high: 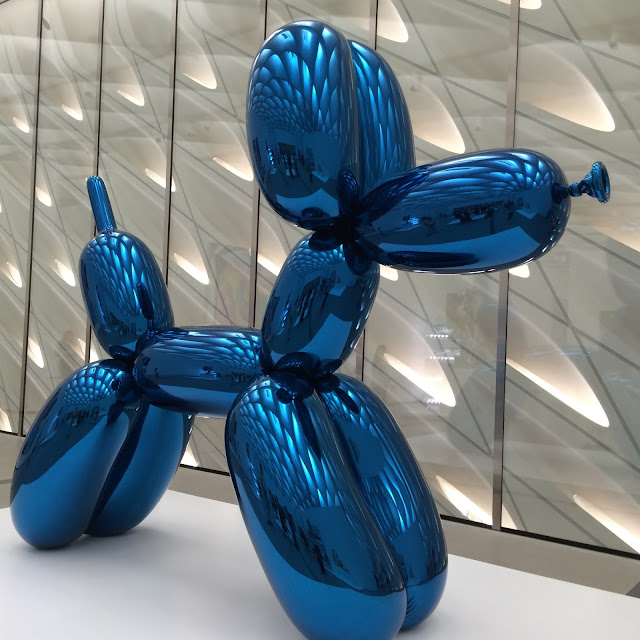 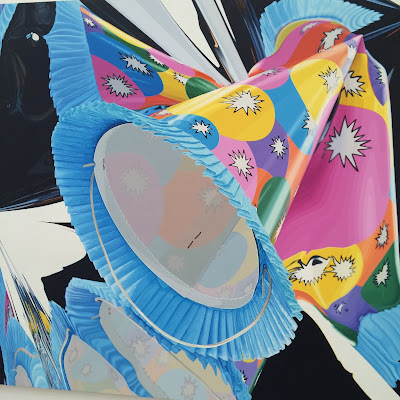 Other pieces I loved include El Anatsui's "Red Block," made of thousands of metallic liquor labels, hitched together like a woven Kente cloth. It was so hard not to reach out and touch it: 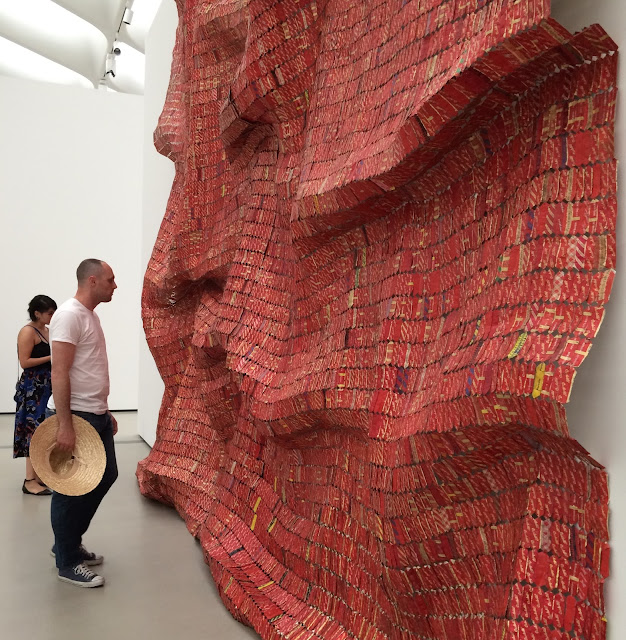 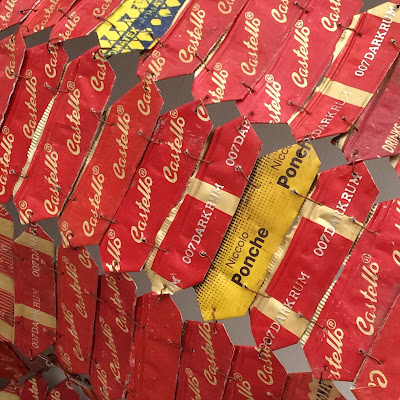 This is Jasper Johns' "Untitled." Too bad the Broads nabbed it; I would be so happy to hang it in my family room. Hah!: 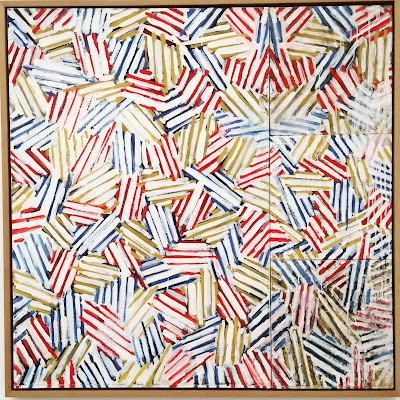 Here's a detail of the same piece: 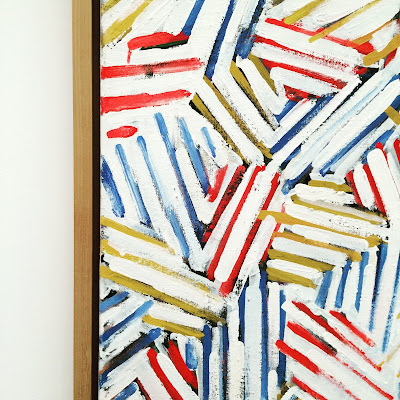 I also enjoyed Bernd and Hilla Becher's photography. They used a large-format camera to capture dozens of water towers in their native Germany. They grouped the objects according to their overall shape. This was what I'd call the "ball on stilts" water towers, and it reminded me of the ones that dotted the prairie in Kansas when I was a little girl: 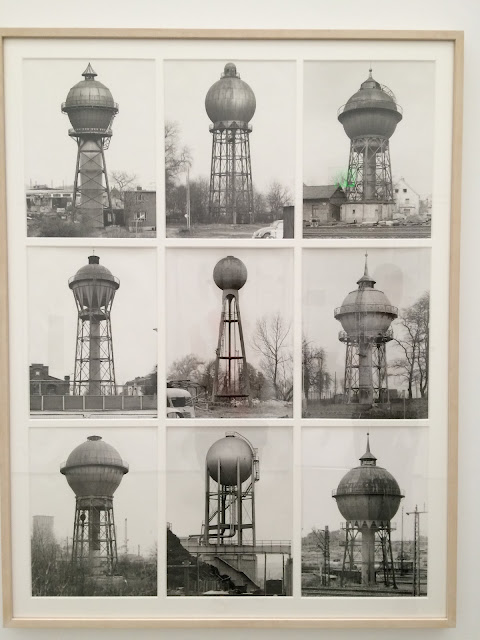 I had fun capturing people in the same frame as the art. Somehow these pieces become more alive when somebody is interacting with them, even if it's just sitting in front of them and twiddling on a cell phone: 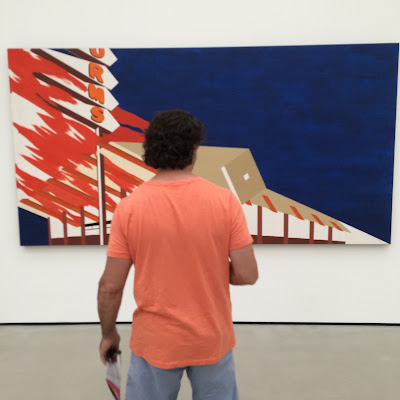 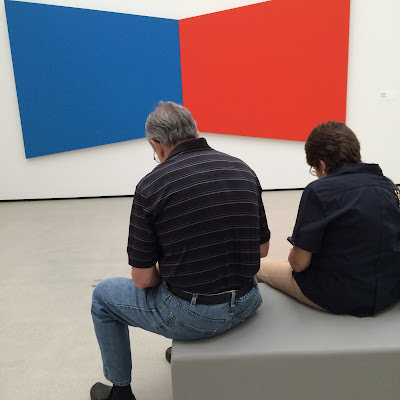 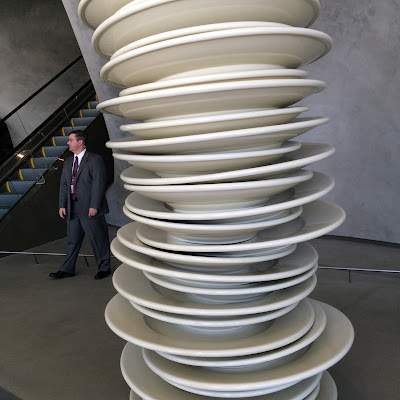 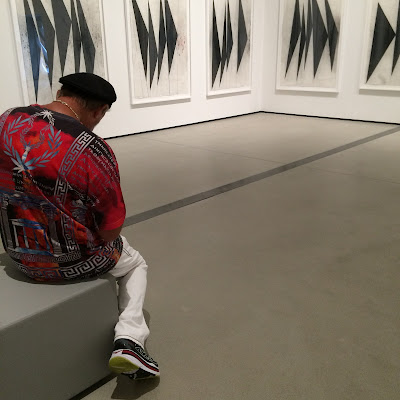 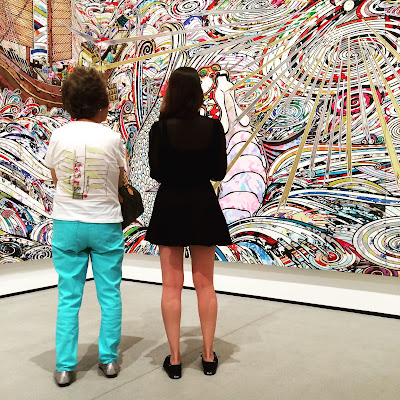 This painting, above, is a small part of the largest piece in The Broad. It's by Takashi Murakami, a mural 82 feet long, called "Land of the Dead, Stepping on the Tail of a Rainbow." It blew me away. So detailed, so colorful, so drop-dead crazy.

In front of his piece was his amazing sterling-silver Buddha statue, maybe three or four feet high. It was a mind-bending mashup of traditional Japanese iconography and cartoonish anime: 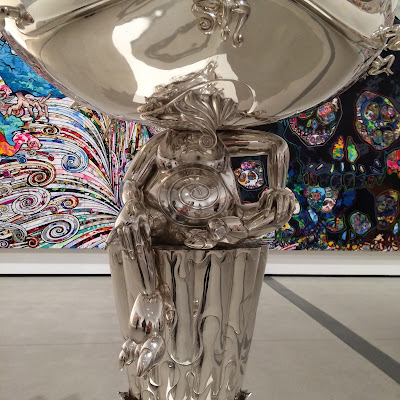 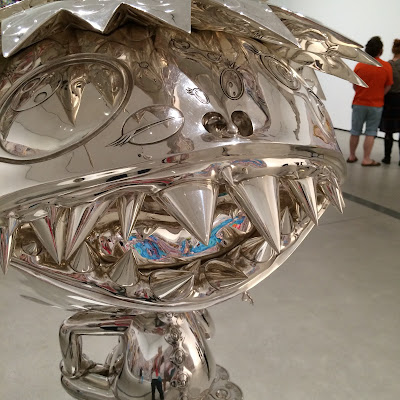 The Broad itself is quite a work of art. The escalator from the ground floor to the next floor reminded me of blood cells coursing through an artery. The walls are Venetian rubbed plaster, and they are wonderfully smooth and touch-able: 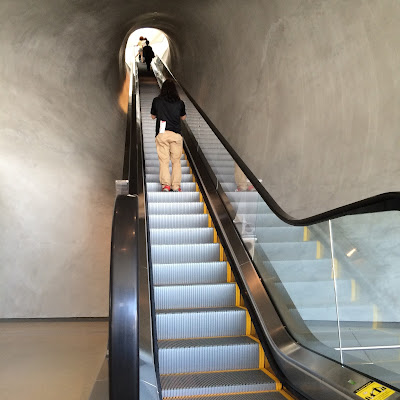 The interior "skin" of The Broad is largely made of glass walls. The outer, mesh-like "veil" that forms the outer skin of the museum leans out from the glass, on the left. The rainbow colors on the glass panels are reflections from a colorful, large piece of art off-camera to the right. I have no doubt that the curators knew what they were doing when they hung the piece where it did. The effect is fun and unexpected: 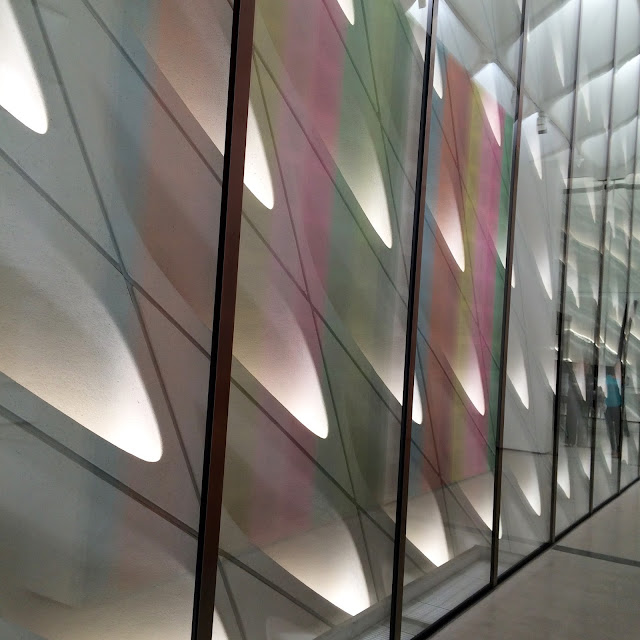 Sometimes the line between art and people is blurred at The Broad. These look like they might be the museum's visitors, right?: 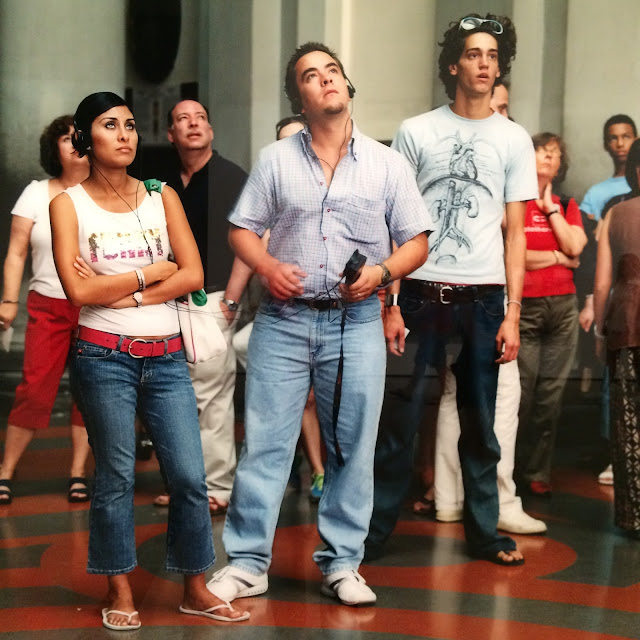 But really, they are huge, hyper-realistic panels done by Thomas Struth--enormously blown-up photographs he took of tourists at the Galleria dell'Accademia in Florence: 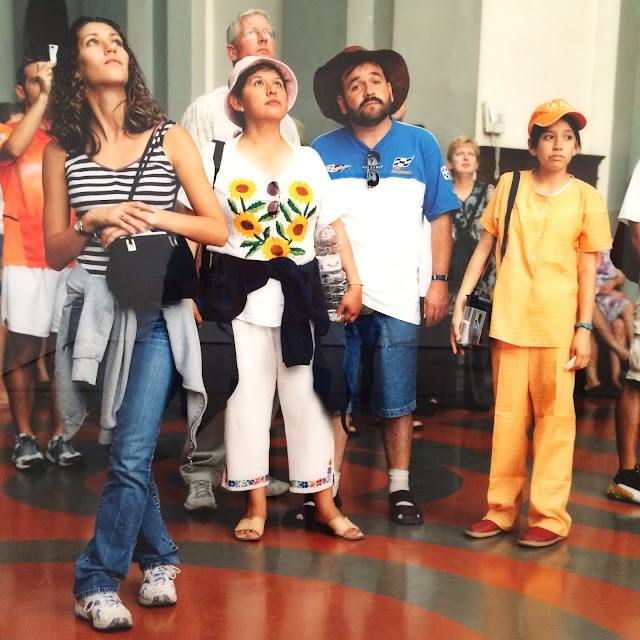 Struth captured these folks as they stood in the rotunda dominated by Michelangelo's monumental "David," which is off camera. 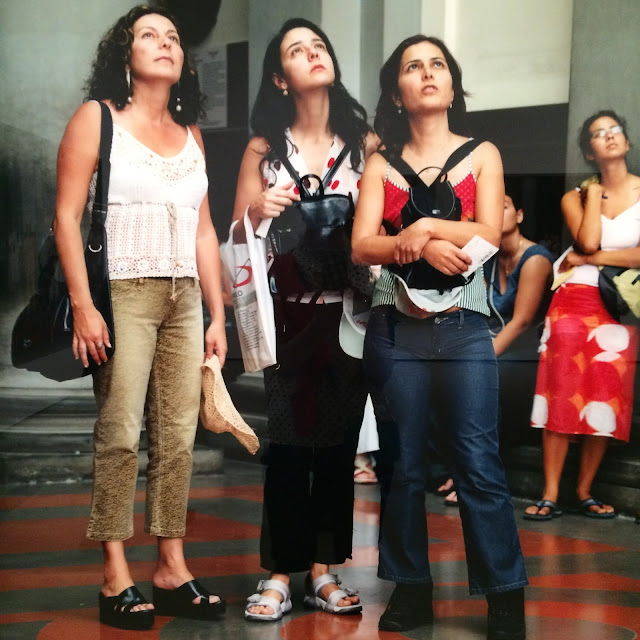 But you get that they are affected by something--something big and awe-inspiring: 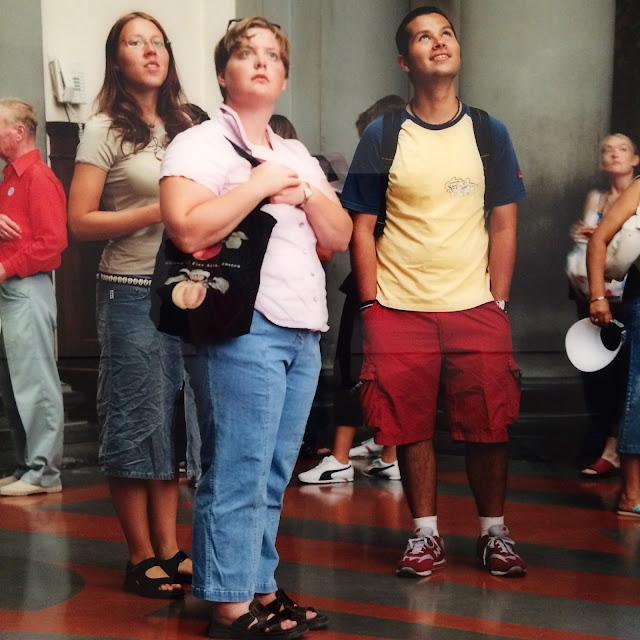 They look the way I felt when I toured The Broad.