Rot, Shock, and Starting Over

I've been away for almost a week; forgive me. It's the Funny-Looking House's fault. I swear! We thought we were doing a fairly simple update of the kitchen--you know, new flooring, add a dishwasher, that sort of thing.

Instead, we found this: 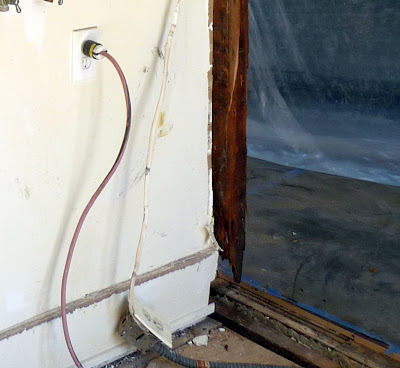 That brown thing running down the side of the white wall? That's supposed to be a LOAD-bearing beam. It doesn't even touch the floor, much less connect to the foundation! 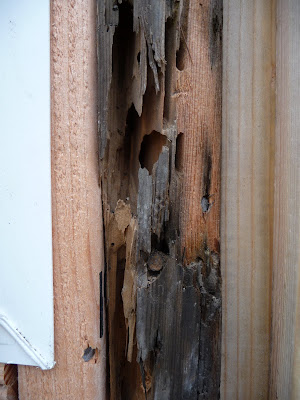 That's a rotten casement surrounding a window, which is now surrounded by brand-new wood, because the only thing holding the old wood together was dust and termite poop.

And this is proof that, before the FLH was gray, even before it was yellow, it was turquoise blue: 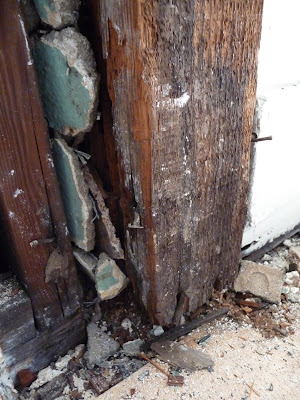 This is left over from what used to once be the exterior wall of the house: 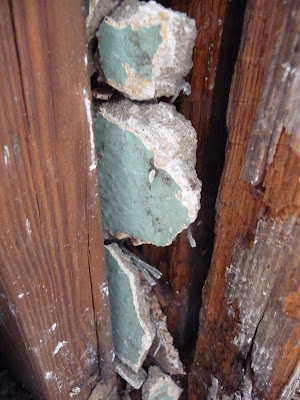 And this is J., on summer break from high school and working for his dad, who's doing some handy-man stuff around the house. We asked him to patch a few cracks, like the little one above the entry way. Except when he poked at the little crack, a platter-sized piece of ceiling fell down: 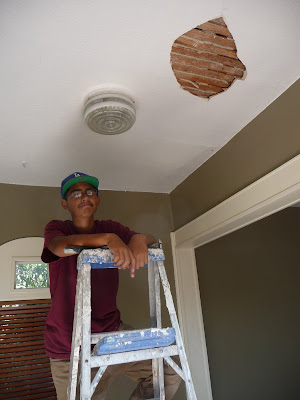 So the entire ceiling had to be scraped off, and the rafters exposed, and a new ceiling will be installed: 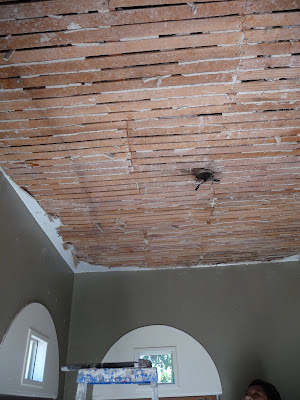 Meanwhile, outside, the handyman's right-hand man poked his trowel into a slightly lifted-up piece of stucco, and suddenly sheets of it collapsed at his feet. It turns out the exterior walls were not properly prepped to receive stucco the last time the house was fixed up, so the "skin" of the house was simply hanging in sheets, like a blanket attached to a clothesline only at the top edge by a few clothespins: 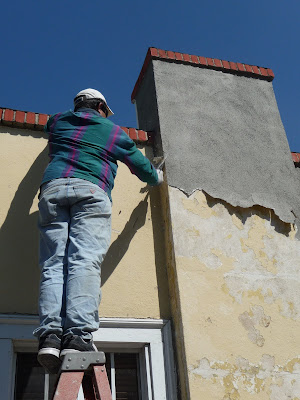 So we were told all the grey stucco has to be removed and the yellow walls underneath had to be power-washed to get rid of any remaining bits. Only then could it be re-painted.

We gulped hard and said, Okay. Power-wash and re-paint, it is.

Except then the handyman and his helper started poking around in the deeper cracks, and they peered inside behind the stucco. You know that black paper that every house is wrapped in to prevent moisture creeping inside? It was all pretty much hanging in shreds, if it was there at all.

So, power-washing the house would've been about the same as sending a river flooding through every room.

And now all the stucco--ALL of it!--has to be removed from the house. So that they can see what other rotten framing is there. So they can see what other nonexistent or shredded moisture-barrier paper is there. So that then--and only then--they can install new lumber, re-wrap the house in black, water-resistant paper, then re-wrap the house in chicken wire, and then re-plaster the entire house. 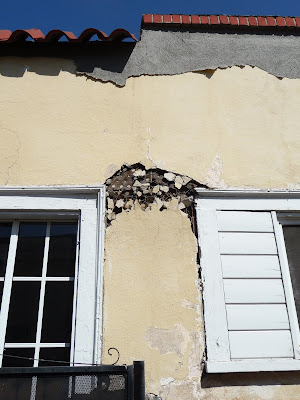 It's so awful, all The Hubby and I could do was burst out laughing. That's him, waving his hands in the air at our contractor. 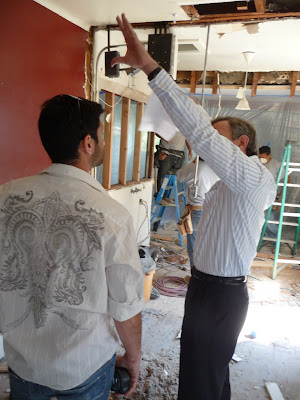 The bad news was overwhelming. I had to escape to the back yard and collect my thoughts in the hammock. 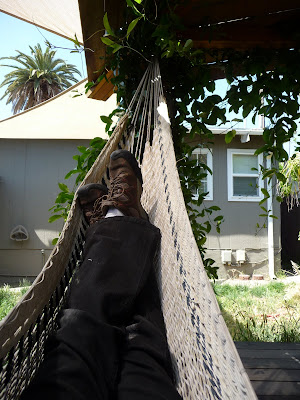 Looking up at the gazebo overhead, I realized the irony: this garden structure may be the soundest part of the house. 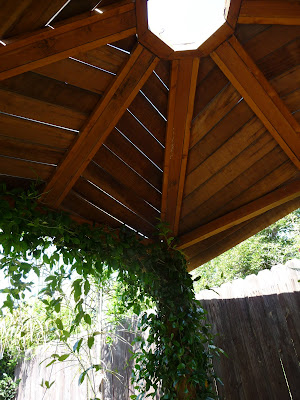 But it's green, and it's pretty, and the birds are singing. And so tomorrow, we begin to tear apart the Funny-Looking House so we can build it back again.
Posted by Juli at 9:47 PM